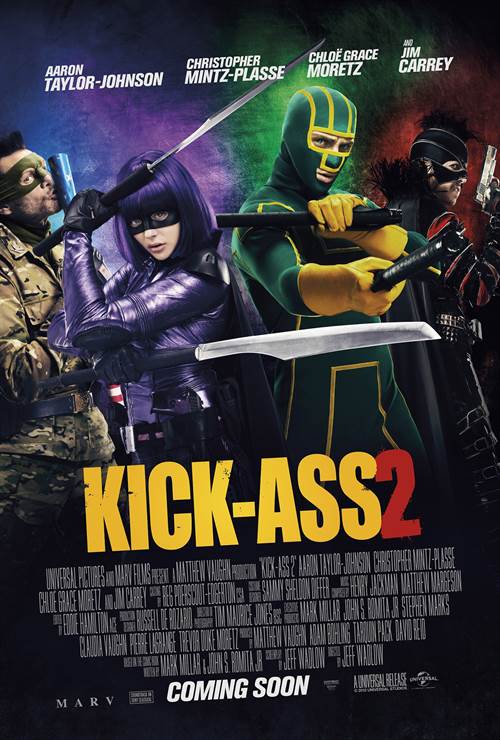 Kick-Ass, Hit Girl and Red Mist return for the follow-up to 2010's irreverent global hit: Kick-Ass 2. After Kick-Ass' (Aaron Taylor-Johnson) insane bravery inspires a new wave of self-made masked crusaders, led by the badass Colonel Stars and Stripes (Jim Carrey), our hero joins them on patrol. When these amateur superheroes are hunted down by Red Mist (Christopher Mintz-Plasse)—reborn as The Mother F%&*^r—only the blade-wielding Hit Girl (Chloë Grace Moretz) can prevent their annihilation.

When we last saw junior assassin Hit Girl and young vigilante Kick-Ass, they were trying to live as normal teenagers Mindy and Dave. With graduation looming and uncertain what to do, Dave decides to start the world's first superhero team with Mindy. Unfortunately, when Mindy is busted for sneaking out as Hit Girl, she's forced to retire—leaving her to navigate the terrifying world of high-school mean girls on her own. With no one left to turn to, Dave joins forces with Justice Forever, run by a born-again ex-mobster named Colonel Stars and Stripes.

Just as they start to make a real difference on the streets, the world's first super villain, The Mother F%&*^r, assembles his own evil league and puts a plan in motion to make Kick-Ass and Hit Girl pay for what they did to his dad. But there's only one problem with his scheme: If you mess with one member of Justice Forever, you mess with them all.

Stream Kick-Ass 2 in Digital HD/4K from the AppleTV store.


Jim Carrey Won't Be Promoting Kick-Ass 2  6/24/2013 4:23 PM EST
Jim Carrey, who stars in the upcoming film, "Kick-Ass 2", has announced that he won't be part of any promotion for the project.   Carrey took to Twitter saying,  "I did Kickass a month b4 Sandy Hook and now in all good conscience I cannot support that level of violence. I meant to say my apologies to others involve with the film. I am not ashamed of it but recent events have caused a change in my ...  More>>

Jim Carrey Signs on to Star in Kick Ass 2  9/4/2012 2:47 PM EST
Jim Carrey has signed on to star in "Kick-Ass 2: Balls to the Wall".He will be playing the role of the Colonel, who gathers together a team of misfit superheroes.  The news was tweeted today by director Jeff Wadlow.Carrey joins the original cast of Chloe Moretz, Aaron Johnson, Christopher Mintz-Plasse and Nicolas Cage....  More>> 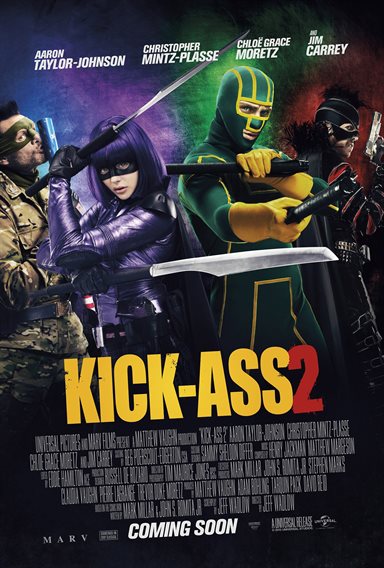 Whenever you have a sequel to an extremely well done movie that could be a one and done story, you run the risk of ruining the first movie with a poorly executed follow-up.  That was a concern of mine, especially since Matthew Vaughn (the director of the original Kick-Ass, and X-Men First Class) was turning over the reins to  Jeffrey Wadlow, who hadn't really done a high profile film before.  My fears were unfounded, as Jeffery was able to take the characters along a journey that completes (for now) their storyline while leaving it open for hopefully a trilogy.

The movie begins after the events of the previous movie, with Dave Lizewski, aka Kick-Ass (played by Aaron Taylor-Johnson) and Mindy McCready, aka Hit-Girl (played by Chloe Grace Moretz) are settling into their "normal" lives after avenging Mindy's mother and father at the end of the first movie.  But is it settling in?  We find out that Dave has hung up the suit, while Mindy continues to train and fight crime in secret.  Meanwhile, their arch-nemesis, Chris D'Amico, fka Red Mist, continues to plan how to avenge his father's death which happened at the hands of Kick-Ass.  As with most follow-up movies, unless the movie has a catch-up event at the beginning, it may be hard to follow along if you haven't seen the previous installment.  This time however, rather than having a whole "Previously on…" opening sequence, each character calls back to the previous movie as needed with clips inserted when they bring up the events of the first movie.  While it might be a little different, it works in this movie.

Shortly after the movie begins however, it splits into three apparently divergent parts.  While it seems that it's not going to work as a cohesive story at first, all three story lines combine by the end of the second act and create an exceptionally amazing film that is a worthy follow-up to the original.  The first story line is Dave's: Extremely bored with his life after hanging up the suit, he gets back into the superhero business with the help of Mindy, and ends up joining up a group of self-made superheroes led by Colonel Stars and Stripes (played by Jim Carrey), an ex-mob enforcer who has turned his life around for good.  This group, patterned after actual real-life superhero groups such as the Rain City Superheroes, patrols the city and helps the unfortunate – you seem them volunteering at a soup kitchen feeding the homeless, which is inspiring in and of itself.  Eventually they do break up a small crime circuit before their path runs into Chris D'Amico's.  Chris, who has been stuck at home ever since the death of his father, is finally allowed a chance to leave and avenge his death.  After finding some parts of a costume in his parent's bedroom, he decides to become an anti-hero, or a super villain.  He later even describes himself exactly as an evil Bruce Wayne, as he is the rich kid who commits crime in secret.  He calls himself The Motherfucker, and sets out to hire other evil superheroes to get back at Kick-Ass for killing his father. He does so, and begins a crime spree that envelops everyone else in the movie.  Meanwhile, Mindy's story is one of normalcy.  Her childhood had been denied by her father, having trained her to fight crime.  Her guardian, Marcus, who was her father's old partner, gets her to stop fighting crime and hang up her suit much like Kick-Ass did.  She then tries to settle in for the high school life of a teenager and joins up with a group of girls very reminiscent of the story of Mean Girls.  While this storyline seems extremely odd in the context of the rest of the movie (the other two story lines being a superhero v super villain story) it works here; most of which it works due to Chloe's spectacular acting.  On a movie such as this, you would expect most actors to just phone it in, but I have yet to see a movie where Chloe does just that.  While some of Hit Girl's old styles and quirks are hard to replicate as she has grown up, Chloe morphs them into the trials and tribulations of a freshman in high school, with the subtle nuances and body language that really make you believe that the actor on screen is really feeling the way their character is supposed to be.  But don't worry, the old Hit Girl character will come back by the third act.  So while her character's storyline isn't really important for the other two, it is important for her redevelopment back into Hit Girl – the old Hit Girl, not the one seen at the beginning of the movie.

This kind of development is sometimes rare to see in a comic book movie – don't get me wrong, this is a comic book movie at its core.  The only difference is that no one in the movie has any supernatural powers.  No spider strings, no arc reactor metal suits, no unbreakable bones or super healing powers.  Superheroes in this movie get badly hurt and even die.  But it's not a dark movie like the most recent Batman series (reboot that is, which this movie has a brief commentary on – just watch a shirt Dave wears in one scene).  While you should recognize some of the overall philosophy from the ending of The Dark Knight in this movie (think of the conversation Jim Gordon had with his son at the very end) it only takes itself seriously enough to be good.  So don't take my rating wrong – this movie isn't going to be nominated for any Oscars (although based on her ongoing performances and the rate she is going at, Chloe Grace Motets is on track to become the youngest actress to win an Academy Award) .  It is a fun, summer comic book movie; from a scene that is reminiscent of "The Red Wedding" from Game of Thrones to an homage to the general stupidity of super villains (think Dark Helmet in Spaceballs for example, or even Dr Evil from Austin Powers) this movie delivers.  There is also a lot of comedy in it, from zingers issued by the superheroes and villains to numerous callbacks from both the first film and from earlier in the movie.  But probably the best part is that the characters even discuss the comic book world – that life isn't a comic book – if you die, you're not coming back; it's final, it's over.  That is why it is a worthy follow-up to the original film.