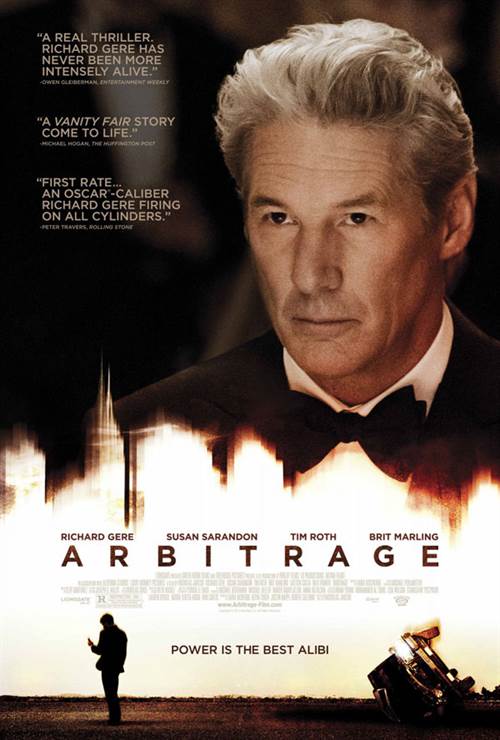 When we first meet New York hedge-fund magnate Robert Miller (Richard Gere) on the eve of his 60th birthday, he appears the very portrait of success in American business and family life. But behind the gilded walls of his mansion, Miller is in over his head, desperately trying to complete the sale of his trading empire to a major bank before the depths of his fraud are revealed. Struggling to conceal his duplicity from loyal wife Ellen (Susan Sarandon) and brilliant daughter and heir-apparent Brooke (Brit Marling), Miller's also balancing an affair with French art-dealer Julie Cote (Laetetia Casta). Just as he's about to unload his troubled empire, an unexpected bloody error forces him to juggle family, business, and crime with the aid of Jimmy Grant (Nate Parker), a face from Miller's past. One wrong turn ignites the suspicions of NYPD Detective Michael Bryer (Tim Roth), who will stop at nothing in his pursuits.

Stream Arbitrage in Digital HD/4K from the AppleTV store. 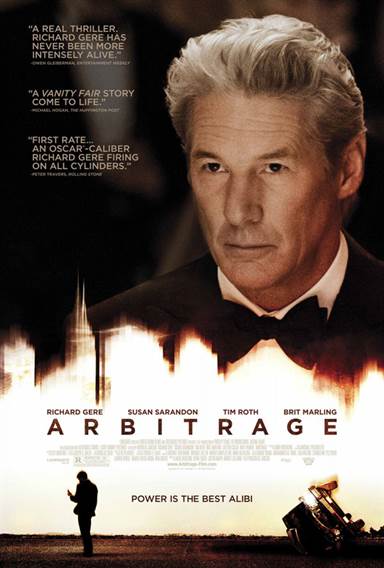 Packed with intrigue and very tense moments, Arbitrage makes its way into movie theaters this weekend. You may have seen similar stories as the Arbitrage script certainly isn't the most original plot that's come to the big screen. But, the performances, directing and cinematography make the film a nice piece of entertainment. If you haven't had your ‘Richard Gere' fixes lately, bat those sexy eyelashes at your significant other, tell him it's a suspense thriller and get him to take you out for a dinner and a movie.

The story centers on Robert Miller (Richard Gere) a multi millionaire who has everything, a big business, nice home, wife (Susan Sarandon) and children, the American dream.  As the story unspools, however we find that there's more than meets the eye.  Tied into a trillion dollar copper mining deal in Russia where he has invested all his cash assets, Robert finds himself with his back to the wall when the Russian Government intercedes.

Forced to sell the thriving company he has to borrow money to show potential buyers his business is solvent.  This is called hedging and an illegal practice that carries a prison term if caught. But, something's about to throw an even bigger monkey wrench into his scheme, an affair and a horrible accident that will turn his life upside down, put a friend in harm's way and cause himself and family a heartbreak that could never heal.

The performers in Arbitrage are expressive, creative and emotionally talented making the intriguing story a winner.  Under the guidance of first time direction Nick Jarecki his players, Gere, Sarandon, Tim Roth, Brit Marling, Laetitia Casta, and Nate Parker develop realistic rolls that are interesting and appealing. Although I must say that having the consummate actor Gere as his star probably gave him more time to work with the lesser known actors.

As Brooke, Miller's daughter and VP of his company, Marling shows her character has strong business morals and when the company ledgers show discrepancies she has to choose between family and duplicity.  Jarecki makes Brooke one of the pawns in this game of chess that have overwhelming complications making the film fascinating.  Playing Jimmy the innocent fall guy who finds himself in trouble with the law at the hand of Miller, Nate Parker does an impressive job of adding the element of incomprehensibly. Taking on the role of Miller's wife Ellen, Susan Sarandon gives another level performance of the wronged wife who has to surrender to her husband's behavior in order to save her children's future.

Although this kind of story of deceit and infidelity has been played out in many films over the years including Intersection in which Gere played the lead, the fine cast and production company makes Arbitrage entertaining.  That said I was not completely satisfied with the timing involving the criminal case that runs within the plot and an ending that left me cold.

Arbitrage has been rated R for language, brief violent images and drug use. The film will certainly play well to the ladies as Gere is not only on top of his acting game, but still got a great physique for a 63-year-old.

FINAL ANALYSIS: A well acted film, but the plot has worn thin. (C+)