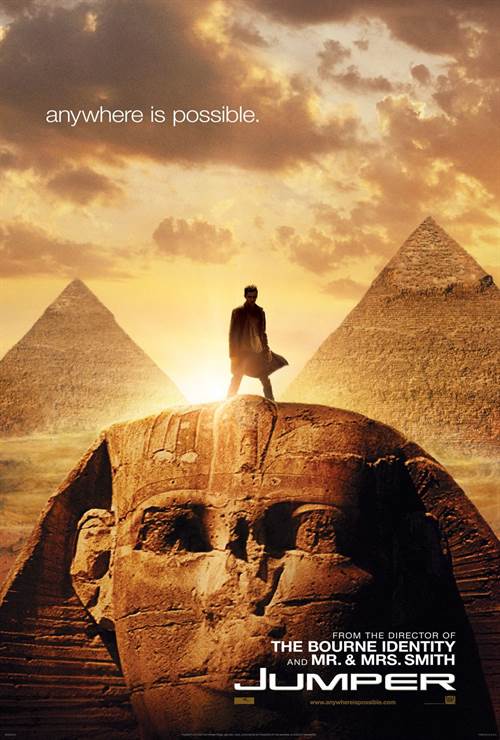 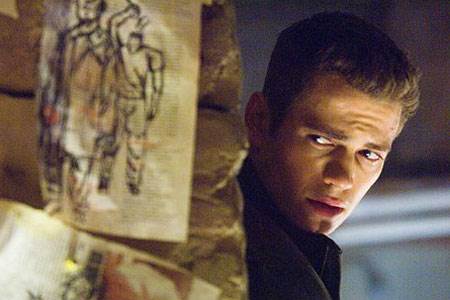 A smart kid with a tough family life discovers that he has the ability to teleport. Empowered, he leaves home for NYC. While using his abilities to track the man he blames for the death of his mother years earlier, he draws the attention of both the NSA and a possibly nefarious guy his own age who has the same abilities and enters into a dangerous game of cat and mouse with both.

Stream Jumper in Digital HD/4K from the AppleTV store. 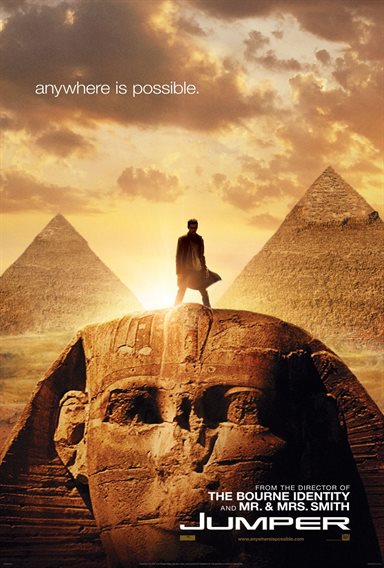 I read the 1992 Steven Gould novel which was fairly streamlined science fiction: take a precept that a young man can teleport and then play the game of figuring out how things might evolve from there. When he's out of cash, he figures out he can jump into a bank vault. When he has an apartment door that doesn't open, rather than having the super fix it, he just uses it as added security ... and so on. Jumper, the book, is pretty understated. Jumper the movie is directed by the producer of the Bourne movies and is a flashy action movie with Sam Jackson as the bad-guy and Hayden Christensen and the main character.

In the movie (unlike the book, which had no evil organization) there is an ancient cult of bad people, religious zealots, who hunt jumpers (of which there are many) and slay them. To do this they use strange shock batons which lash out cables that capture their targets, tase them so they can't teleport away, and hold them until the guys can use ceremonial knives to execute them. Apparently they have not heard of bullets.

Also in the movie (unlike the book, which had no other jumpers) there is Jamie Bell who plays "Griffin" one of several. They "team up" (Griffin is mentally disturbed at best) and wage an incredibly inept war against Jackson who is not fooling around (except for using the weird cable guns ... that's "fooling around" as far as I can tell).

I think the driving force behind Jumper was the director's wish to film in exotic locations, the best of which is inside the Colosseum under the conditions that no equipment could be placed on the ground, that they only had 2hrs per day, and used natural light. I bet that was a blast. They also got to do Tokyo and even Ann Arbor! Beyond that, though, I'm not sure they had a lot in mind really: mostly just some set up for Jumper-2 (the book's sequel was called Reflex).

The problem with Jumper is not in the details. Hayden is a strong lead, Jackson has charisma even when his character is purely two-dimensional and doesn't make a lot of sense (they have religious objections to teleporting but have a machine that allows them ... to teleport). The locations are indeed sumptuous and the action, courtesy of Simon Kinberg (X-3, Mr. & Mrs. Smith) is pretty crackling. No, the problems are not in the wide angles: they're in the details.

The movie asks several questions (will the main character, David, unite with his high school sweetheart? What happened to his mom? Will he make it in the world? Who is Jackson, anyway?) and answers them all in a pat, flat manner. Hayden isn't impossible to care about but he's a bit of a cold fish (at one point he watches people trapped in a flood-zone on TV with the announcer saying that it'll take a miracle to reach them--he goes surfing--and the character arc of him becoming less self-centered is never resolved). The other characters only have first names which, while not meaningful in and of itself, is pretty telling since they only have one dimension to the rest of them too.

The whole electrical baton and fighting while teleporting thing is visually well done but takes center stage when it should be a throwaway (in Cammeron's T2, the terminator does things like grow a 3rd arm to fly the copter and shoot and turn around by morphing during the battle--this is as it should be--understated). When watching the movie I felt like it was all sugar and no meat.

Ultimately Jumper is a big summer movie that came out in the winter. It's loud, flashy, and dumb. It has reasonable star power and good location shots (the on-top-of-the-Sphinx money shot is worth whatever the paid for it). It's a bit like the Wizard of Oz trio though in that it doesn't have the guts to take real chances, it lacks "heart" in terms of characters that we really connect to, and it, um, isn't too smart.