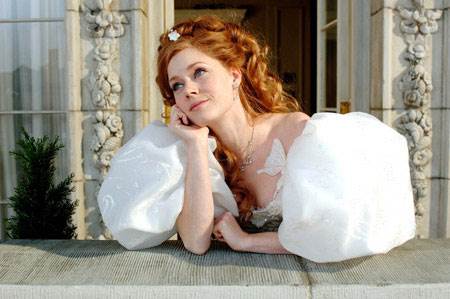 A classic Disney fairytale collides with modern-day New York City in a story about a fairytale princess (AMY ADAMS) from the past who is thrust into present-day by an evil queen (SUSAN SARANDON). Soon after her arrival, Princess Giselle begins to change her views on life and love after meeting a handsome lawyer (PATRICK DEMPSEY). Can a storybook view of romance survive in the real world?

ENCHANTED is directed by Kevin Lima ("Tarzan, "Eloise At Christmastime") from a screenplay written by Bill Kelly ("Blast From the Past") and will feature original songs from the reunited team of acclaimed composer Alan Menken and lyricist Stephen Schwartz ("Pocahontas,", "Hunchback of Notre Dame").

Download Enchanted in Digital HD/4K from the iTunes store. 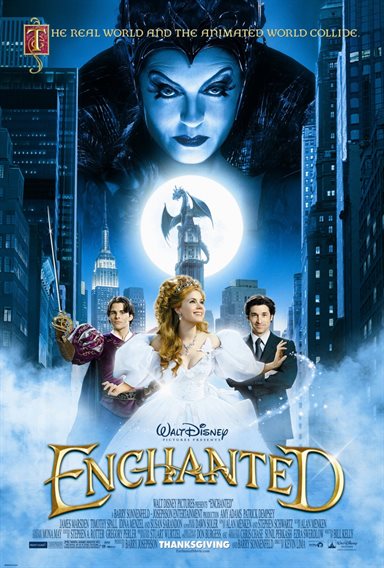 A classic Disney fairytale collides with modern-day New York City in a story about a fairytale princess (AMY ADAMS) from the past who is thrust into present-day by an evil queen (SUSAN SARANDON). Soon after her arrival, Princess Giselle begins to change her views on life and love after meeting a handsome lawyer (PATRICK DEMPSEY). Can a storybook view of romance survive in the real world?

The one thing that really gets implanted in the viewers mind is the great casting. With seasoned actors like Susan Sarandon, Julie Andrews, Patrick Dempsey and Timothy Spall included in the cast, you know this movie was going to be something special. Susan Sarandon as the wicked stepmother, Narissa, was a perfect fit. Everything about her went into the character, the voice, the facial expressions and her actions. Julie Andrews as the narrator was a wonderful compliment to the movie-going experience (not to mention, she's one of my idols!). Patrick Dempsey as the closed-minded New York attorney and father of one's character cannot help but succumb to Giselle's beauty and kindness.

On that note, this film was a door opener for the lovely and talented, Amy Adams. She was perfect as a Disney princess. Airy, naive and sweet, she did an excellent job as Giselle. One would hope this role doesn't typecast her because her versatility would be well suited to other characters. She was fantastic in Junebug, and she has unlimited potential to expand her talents. She has a voice like an angel and the poise of the most perfect Disney princess. Her sidekick, the adorable, wisecracking Chipmunk, Pip, was a typical sidekick, but irresistibly cute and funny.

James Marsden shows a different side to himself, having been seen before in action films like X-Men and Disturbing Behavior. This year he blows you away as Corny Collins in Hairspray. Who would've known he had such a great voice? Seems this is his year to shine. His role as the corny, yet dashing, Prince Edward was great was yet another perfect fit.

Some of the best parts of this film were the "That's How You Know" scene in Central Park, "The Working Song" scene, when Giselle goes to work with Robert (Patrick Dempsey's character), Prince Edwards screwy chase to find Giselle and of course, The Ball Scene. The costumes in the final scene were gorgeous.

What the audience will really love about this film is that though it ends how most of us women would've wanted it to, it wasn't what you would call a "perfect" fairy tale. It was a very cute and light movie, but going on Giselle's evolutionary journey from naive fairy tale princess to a real life individual woman was exciting and refreshing. Going on dates with Prince Edward rather then marrying him after laying her eyes on him was both enlightening and contrary. This film had a great twist on the fairy tale stories we all know and love.

This is a movie for anyone who has ever experienced fairy tales or Disney in their lives. It had many throwbacks to original Disney films including, Cinderella, The Little Mermaid, Sleeping Beauty and Snow White, among many others. Jodi Benson and Paige O'Hara who in the past have voiced famous Disney princesses such as Ariel and Belle, made cameos in this film, which was really cool! They really worked hard to make this film work and they did an amazing job. Having Alan Menken back at work on the fantastic music, it just added to the whole experience. Every element of this film works. The story, the music, the characters, the acting talents and the direction are all to be loved.

This movie gets flicked WAY up, so get out there and see it! It's great for the Holiday season. Go see it with your sweetheart, your family or your friends, you won't regret it.