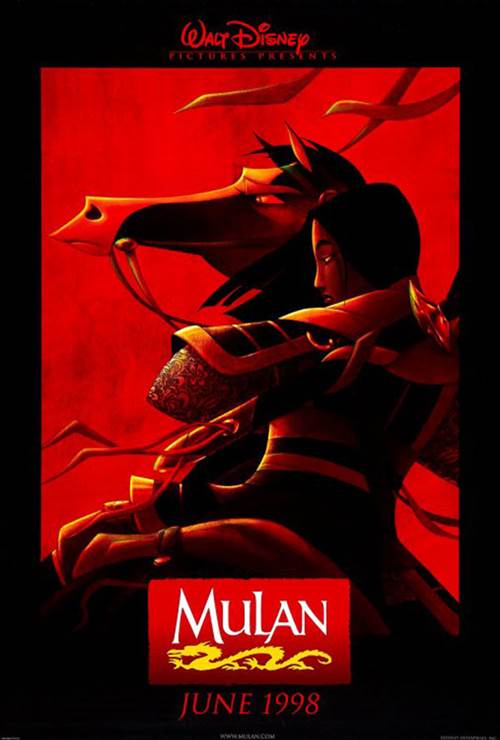 Based on an ancient Chinese poem, the legend of Mulan beautifully unfolds in Disney’s 36th animated classic! Full of daring adventure, hilarious characters and inspiring music, this new edition celebrates honour, courage and a young girl’s quest to be true to her own heart. Beautiful and clever Mulan proves her worth outside of her tradition-bound society when, disguised as “Ping,” she bravely takes her father’s place in the Imperial Army. Helped by her outrageously funny guardian dragon Mushu and a lucky cricket named Cri-Kee, Mulan strives to earn the respect of her fellow warriors and their handsome Captain Shang. A climactic battle atop the Imperial Palace is where her family’s honour and the fate of the Emperor and all of China rest in her hands!

Stream Mulan in Digital HD/4K from the AppleTV store. 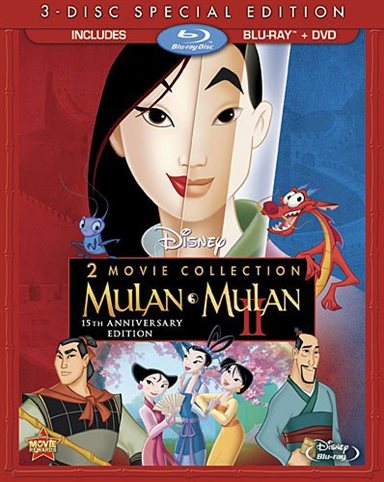 "Mulan" was at the tail end of Disney's hand-drawn animation success and it seems as though it was one Disney's more underrated successes.  The music and songs are memorable and it has fun characters like Mushu (Eddie Murphy).  The film also creates another classic Disney princess, who is not only pretty but also very strong. "Mulan II" on the other hand is quite a different story. It comes from a time that Disney was making sequels left and right just for the sake of the buck. So obviously the main draw here is to own "Mulan" for the first time on high-def Blu-ray. The film is also celebrating its 15th anniversary, which is cause for celebration.
This retelling of the old Chinese folktale is about the story of a young Chinese maiden who learns that her weakened and lame father is to be called up into the army in order to fight the invading Huns. Knowing that he would never survive the rigours of war in his state, she decides to disguise herself and join in his place. Unknown to her, her ancestors are aware of this and to prevent it, they order a tiny disgraced dragon, Mushu to join her in order to force her to abandon her plan. He agrees, but when he meets Mulan, he learns that she cannot be dissuaded and so decides to help her in the perilous times ahead. However, it's only a matter of time before Mulan's secret is exposed and regardless of this fact she does everything in her power to save the people of her country.
Mulan 2 finds Mulan gets the surprise of her young life when her love, Captain (now General) Li Shang asks for her hand in marriage. Before the two can have their happily ever after, the Emperor assigns them a secret mission, to escort three princesses to Chang'an, China. Mushu is determined to drive a wedge between the couple after he learns that he will lose his guardian job if Mulan marries into the Li family. After the princesses unexpectedly fall in love with the Gang of Three, Mulan decides to help them escape the fate of marrying men they do not love. This contradicts the Emperor's orders and forces him to put Mulan's relationship with Shang into question. Along the way they are attacked by Mongolians, and the fate of China hangs in the balance.
Disney is known for going out of their way to deliver very impressive high-def transfers of their classic animated films.  "Mulan" ranks up their with the best of them. The 1080p is extremely sharp and really showcases the beautiful animation and colors used throughout this film. There is something about hand-drawn animation that just really looks amazing on Blu-ray. "Mulan II" also (believe it or not) looks quite amazing with its 1080p transfer.  Of course, it is not as good as "Mulan" since it carriers that direct-to-video look, but the colors do pop. Like the 1080p video, "Mulan" also packs a fantastic DTS-HD Master Audio 5.1 surround track.  It works very well with the music and action. "Mulan II" also sounds great but again a notch below the first.  The songs (even though not great) sound decent and the dialogue is clear. Both films are located on one Blu-ray disc and the additional two DVDs include each film on their own disc.
The special features are probably my least favorite aspect of this whole release.  "Mulan" packs nothing new at all for it's 15th anniversary and just rehashes its DVD features, all presented in SD.  There is an audio commentary track with Producer Pam Coats and directors Tony Bancroft and Barry Cook, decent and very informative.There are seven deleted scenes (like usual) in storyboards mode with introductions by director Tony Bancroft. "Classic Backstage Disney" runs about an hour with numerous behind-the-scenes featurettes including "Mulan's Fun Facts," "The Journey Begins," "Story Artists' Journey," "Design," and  "Production".  Lastly "Classic Music & More" includes more featurettes including "Songs of Mulan," "Mulan's International Journey and five music videos. "Mulan II" fares even worse with only three short extras.  "Voices of Mulan" looks into the return of several original cast members, as well as the new voices.  There are three deleted scenes, surprisingly in HD. Lastly there is a music video for "I Wanna Be Like Other Girls" by Atomic Kitten.
"Mulan" is not the only animation classic being released on high-def Blu-ray.  March 12th will also bring the release of "Brother Bear 1 & 2?, "The Hunchback of Notre Dame 1 & 2? and "Who Framed Roger Rabbit", which is celebrating its 25th anniversary.  Of course like Disney is smart to release their films like that "Mulan",  "Brother Bear" and "Hunchback" with their direct-to-video sequels because otherwise I do not think that anyone would be interested in owning them.  So I look at these direct-to-video sequels as a bonus feature really.  I am not sure how "Who Framed Roger Rabbit" fits into this trend but that is one release that I am highly anticipating.