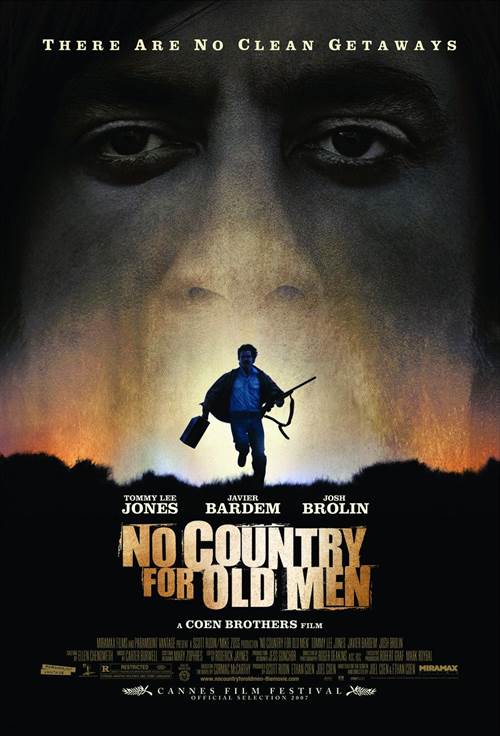 No Country For Old Men Synopsis 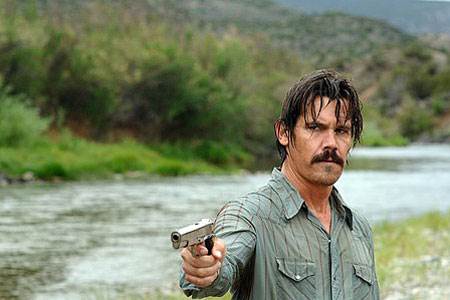 Llewelyn Moss finds a pickup truck surrounded by a sentry of dead men. A load of heroin and two million dollars in cash are still in the back trunk. When Moss takes the money, he sets off a chain reaction of catastrophic violence that not even the law - namely aging, disillusioned Sheriff Bell - can contain. Moss tries to evade his pursuers, in particular a mysterious mastermind who flips coins for human lives, as the crime drama broadens.

Stream No Country For Old Men in Digital HD/4K from the AppleTV store.

No Country For Old Men images are © Miramax Films. All Rights Reserved. 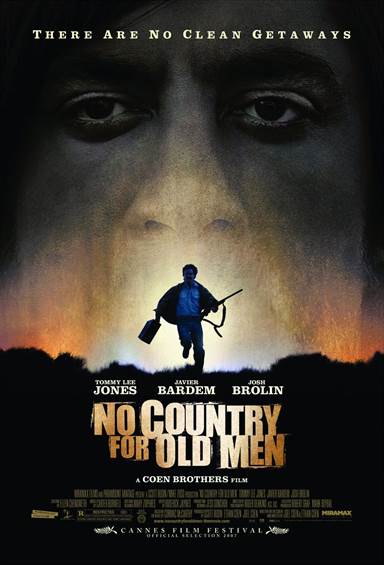 The title comes from WB Yeats Sailing to Byzantium (a poem about growing old). It's a bit of the ultra violence based on a book by Cormac McCarthy and turned into a movie by the Cohen Brothers. It revolves around a convoluted plot where a bunch of clever, resourceful, and dangerous men vie for 2.4 million dollars in drug-money.

Some are fairly "good guys." Some are definitely bad guys. Some are people we might like even if they're bad guys. Only Tommy Lee Jones, playing the crusty sheriff (who seems to have come directly from Kill Bill) is definitely a good guy. Does the sympathetic character get the money and live happily ever after? C'mon--this is the Cohen Brothers. What happens in the movie is essentially unpredictable.

It's an Anti-Narrative
Country's structure defies the traditional narrative and completely turns the Hollywood narrative on its head. Climaxes fizzle, unexpectedly characters die, and there is no (clear) moral message. Some reviewers have found it nihilistic--most of them (96% Rotten Tomatoes score) found it brilliant. What do I think about the anti-narrative?

Well, I'm glad all movies aren't structured like NCFOM. I mean, I'm not a 3-Act English-teacher Story-Nazi but the stuff that works works for a reason. If you're going to ditch that you better be damn certain. The Cohen brothers are, in fact, damn certain. They have a winner on their hands and they're willing to run with it.

It Respects The Audience
I watched the Wahlberg vehicle Shooter a few weeks ago and while it was technically very good it often stopped to explain to us what the characters were doing. There is exactly one scene in NCFOM where one character explains himself and he's explaining himself to a younger character who is in training. There is zero sense that the audience needs to have what these (very competent) characters do or why they do it. Some of it you'll get. Some you won't. That's okay. I like that. I like that a lot.

The film also has guts when it comes to not showing us stuff. There are key events that we simply don't see (including some major character deaths). This is risky business and I think it works for the show. The Cohen brothers know that they can essentially push the movie right to the edge of what we'll accept and it'll work (partly because they are the Cohen brothers--and partly because the material is simply so strong).

Getting Specific
Here I'm going to stray into spoiler territory so if you don't want anything ruined for you, steer clear.

The Key Scene
I believe that the scene where Jones enters the hotel where Llewelyn Moss was killed is the axial point the movie revolves around. It seems that super-killer Anton Chigurh is in the room with him, yes? I think he knows it. He knows that the window is locked. There is evidence the lock was punched out by Chigurh's captive bolt pistol recently. I think that Jones' character elects not to face Chigurh and therefore lives. I think he turns away from upholding the law and chooses, instead, to retire alive. Considering that he would probably stand little chance against Anton, I suppose this isn't craven.

Is this in the movie? I'm not sure--but it's the scene where the key characters actually collide--and there's focus on the locked window.

Glorifying Psychopaths
In cinema serial killers and psychopaths act as our judges: they hold the power of life and death over their victims and are imbued with the ability to discern who should live and who should die. I think there is a certain amount of (naive) glorification of these characters. I believe that Anton, the deadliest character in the story, holds an elevated position: he is given to us as a man of principle and a force of nature.

I didn't especially like him, however, and I don't like that perspective very much. I will admit that the movie doesn't make him sympathetic although his resonant voice and the attention paid to his 'rules' wherein he gives people choices and holds them morally responsible, I think makes a statement on the part of the directors. One of the comments I read in a review said that we, as the audience, are supposed to be in a certain kind of 'awe' of him--I think that's right.

I don't, per se, mind this--I'm not morally outraged by it--but I did note it--and I didn't quite buy it.

Conclusion
The movie is daring, subtle, shocking, and intelligent. It's not especially satisfying (the anti-narrative) and some of it gets more than a little confusing if you lose the thread (who is the guy Tommy Lee Jones goes to visit towards the end? What relevance does it have to the rest of the story?).

It's good--just go into it knowing that it's a challenging film.