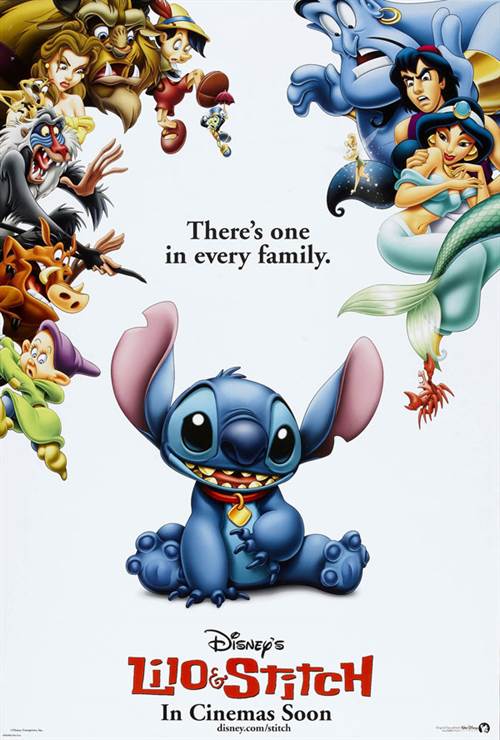 The story of a little creature created by genetic experimentation and bound to prison with his evil creator. Stitch escapes and heads for Earth where he tries to impersonate a dog and gets adopted by little Lilo, whom, bent on self preservation, he plans to use as a human shield to protect him for the aliens sent to recapture him. But without a greater purpose in life, no friends, family or memories, Stitch does a little soul searching and begins to understand the meanings of "love" and "family" and his feeling for Lilo begin to change

Stream Lilo & Stitch in Digital HD/4K from the AppleTV store.

Listen to the Lilo & Stitch soundtrack on Apple Music.


New Director Steps in for Live Action Lilo & Stitch  7/14/2022 4:52 PM EST
Dean Fleischer-Camp has stepped into the role of director for the upcoming Disney live-action "Lilo & Stitch" remake. Jon M. Chu stepped down after his deal was never finalized. Chris Kekaniokalani Bright is said to be in negotiations to write the adaptation, but there's no word on actors to fill the roles of Lilo or Nani. The original 2002 film grossed over $273 million at the box office, and spa...  More>>

Lilo and Stich Set for Live-Action Remake  2/12/2020 11:24 PM EST
Disney's "Lilo & Stich" is the next animated film to be getting a live-action/CGI hybrid remake. The film will be made for Disney+.The original film was released in 2002 and grossed over$273 million at the box office. It follows the story of a young girl named Lilo and alien named Stich, who crash-landed on Earth. The two become fast friends and Lilo takes Stich into her home as her pet.Other film...  More>> 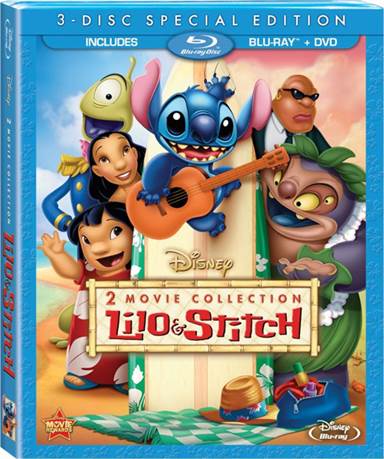 "Lilo & Stitch" was Disney's major animated release for 2002, and it was interesting enough to make a splash at Cannes. There was something intriguing about a little Hawaiian girl and a mutated alien she adopts, thinking he's a dog. Same old same old? Not remotely. Especially when you have that girl stuck on Elvis, with her playing his records all the time, and when you add a teenage sister who's responsible for Lilo because their parents were killed in a car accident. (Don't pretend to be shocked--this IS Disney we're talking about, and orphans are their specialty.) This one was for all the lost sheep and ugly ducklings out there--a nature vs. nurture experiment where nurture finally wins out, and even the oddest duck finds a family.

When a multi-eyed mad scientist, Jumba Jookiba [voiced by David Ogden Stiers], is brought to trial for creating a mutated monster programmed to destroy things, the supreme space council banishes Experiment 626 to life on an asteroid prison. But the tiny blue creature, which looks a bit like a deranged koala bear with a lionfish spine and an extra pair of arms, cops a police spacecraft and ends up crashing on a Hawaiian island. Enter little Lilo [Daveigh Chase], who lives with her older sister, Nani [Tia Carrere]. Since the death of their parents she's been a bit of an anti-social outcast herself, biting friends and conjuring up voodoo dolls to "punish" them. She prays for an angel who could be her friend, and when she sees the spaceship crash, she thinks it a falling star and a sign that her prayers have been answered. But instead of an angel, what she gets, of course, is a little devil. In fact, Stitch was an experiment for the House of Mouse, too. Not since Warner Brothers' toothy and snarling Tasmanian devil has there been a cartoon character capable of whipping up such perpetual mayhem-in-motion. And Stitch makes the biggest character transformation ever: from antagonist to protagonist in the span of just 85 minutes. Though her condition isn't as severe, Lilo's journey is the same, nonetheless: from anger to happy acceptance.

It all starts when, dazed from the crash, the little monster is hit by a truck and taken to an animal shelter. He first tries to escape, but when he sees that Jookiba and his one-eyed assistant [Kevin McDonald] have been sent to bring him back, he pulls in his spine and extra set of arms and tries to pass for a dog. The rest of the film follows the little guy Lilo names "Stitch" as he interacts with his adoptive family--Lilo, Nani, and the older sister's boyfriend, David [Jason Scott Lee]--and continues to dodge his pursuers. Complicating matters? Another intergalactic henchman [Kevin Michael Richardson] is sent to capture Experiment 626, and a Men-in-Black-looking social worker named Cobra Bubbles [Ving Rhames] threatens to remove Lilo to a more stable environment. It doesn't help that David is prone to set things on fire, and Nani can't seem to control her sister. But as their father told them, Ohana means family, and family means that no one is left behind. And kids, you have to care about someone other than yourself. That's the message. Will every ruckus-wreaking youngster who watches Lilo & Stitch see the pain that Stitch inflicts on the family, sense his remorse, and mimic his behavioral turnaround? That seems to be the hope in this Disney venture that seeks to have it both ways--edgy and feel-good.

Stitch may be the rambunctious one, but it's Lilo who steals the show. Anyone familiar with the behavior of 4-6 year olds will find her character dead-on--the gestures, the melodramatics, the expressions, the quick fuse. Whether she's trying to explain why she's late for her hula lesson (She had to feed her fish in the lagoon, and her sister had packed tuna fish. Could she feed tuna to her fish? NO!) or squirting Stitch with a water bottle to try to train him, she evokes full-on sympathy. What's refreshing about this film is that everything isn't all sweetness and light. The relationship between Lilo and her big sister isn't exactly the model behavior one finds on The Cosby Show. This Disney orphan feels more than just a momentary twinge of sadness. Lilo and her sister have actual issues to resolve, and the little alien, ironically named "Stitch," as in sewing, tears them apart before he ends up helping them to mend.

Alan Silvestri collaborated with Hawaiian hula master Mark Keali'i Ho'omalu to create two wonderful songs that capture the spirit of the islands and this island romp, and Silvestri also managed to playfully integrate eight Elvis songs into the film's soundtrack.
The artwork is distinctive in that it looks like a brighter-than-pastels series of watercolors, and the backgrounds and animation--whether under water, above it, or anywhere else on the island--is wonderful to look at. Even John J. Puccio, who's said on more than one occasion that he really isn't a fan of animated films, wrote in his review of the first DVD release that "with its good humor, quick pace, deft direction, and beautiful art work, the film is a pleasure to sit through." That's high praise, and it gets better with age, too.

Like many of Disney's releases lately, Lilo and Stitch comes with its sequel Stitch Has a Glitch. Although Lilo & Stitch 2: Stitch Has a Glitch is an even smaller scale tale than its predecessor, decidedly direct-to-video, and better suited to television than anything else, it's heart is just as big, and that goes a pretty long way. Not far enough to elevate the sequel to the heights of the original feature film, mind you, but far enough to make it a harmless, reasonably entertaining diversion good for a rainy family night or a chilly Saturday morning. This time around, Lilo (Dakota Fanning) begins preparing for a performance at a local dance festival just as Stitch (Chris Sanders) briefly and inadvertently begins reverting to his old ways, which threatens to spoil her chances of winning. Distracted by the demands of the competition, Lilo grows increasingly frustrated with her alien friend, all while Dr. Jumba Jookiba (David Ogden Stiers), his creator, struggles to build a fusion chamber capable of saving Stitch before the glitch becomes permanent.

There's nothing wrong with Lilo & Stitch's sequel per se, other than it's miniaturization for the small screen. Its animation isn't as eye-catching (even though it more closely resembles its original film than most Disney DTV sequels), its script isn't as sharp, its music less catchy and more forced, and its adventure slighter and more trivial. There's also little in the way of surprises this time around. The first film is an all-ages treat, while Glitch primarily targets the kiddies. Not that anyone should grumble. Direct-to-video animated sequels are notoriously average -- particularly when it comes to Disney -- and diminishing budgets, creative talent and timetables play a major role. Stitch Has a Glitch accomplishes everything it sets out to accomplish, it simply doesn't set its sights very high. The original was strong enough to earn a full-fledged theatrical sequel, and this is anything but that, right up through its much too neatly wrapped third act. Ah well. You could do worse, that's for sure.

When you know how flawless a picture can look in 1080p, it skews your perception of 720p. But these discs are as good as DVDs get. The amount of grain is fairly minimal, and the watercolor look is tonally in tune with the laid-back personality of the Hawaiian islands. The audio is a lively Dolby Digital 5.1 Surround. It's a fairly dynamic soundtrack for a DVD, with a slightly rumbling bass and strong mid-tones driving it.

Most of the extras are small, averaging just 2-4 minutes, but they're still a fun complement to the film. Music-wise, there's a short feature on the 40-voice Kamehameha Schools Choir, composed of Hawaiian children ages 9-13. They do the back-up on the two original tunes, and really make both songs soar. Then there's a short piece on Wynonna, who does a new version of Elvis's "Burning Love" (the King handles most of the songs), a short "Hula Lesson" with footage of Keali'i Ho'omalu in the classroom talking about the hula and the four basic steps, and a music video of "I Can't Help Falling in Love with You" by the A-Teens. Kids will like this disc's version of DisneyPedia, where you can click on each of the Hawaiian Islands to learn about them. There's some gorgeous footage of the islands and enough facts to satisfy young minds. Also fun is the "Stitch in Time" slide show, featuring the little blue monster in stills from Snow White and dozens of other Disney classics. Best, for kids, is the "Create Your Own Alien Experiment Game," which combines trivia with a guess-the-order click-on. Three sets of three questions are included.

The most substantial bonus feature on disc one is the audio commentary by directors Chris Sanders and Dean DeBlois, who are a little more energetic on this track than they are on the disc two documentary. The ground they cover is typical, but they do a good job of nailing down the combination of strategic and anecdotal information.

Lilo and Stitch embodies everything good about Disney and Lilo & Stitch 2: Stitch Has a Glitch isn't the be-all, end-all of Disney direct-to-video sequels, but it's fairly enjoyable. Their able-bodied video presentation and lossless audio mix only help. For a fun and enjoyable experience for you as well as your kids, this 2 movie combo is surely the way to go.