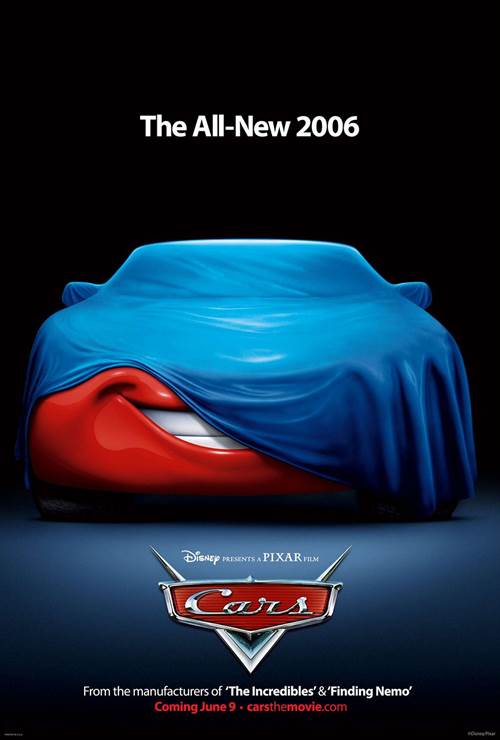 Lightning McQueen is a cocky, rookie race car. Speeding on his way to a big race, he crashes into Radiator Springs, destroying lots of the inhabitants belongings. In order to make up for what he did, the cocky roadster is sentenced to community service. Though he will do anything to get away from the work, McQueen must learn to respect and bond with the Radiator Springs inhabitants in order to get out of the town and back on the racetracks.

Download Cars in Digital HD/4K from the iTunes store. 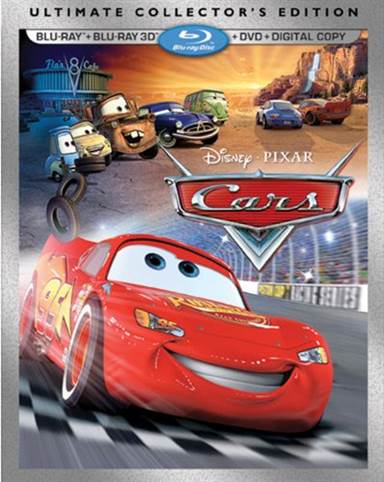 The 3D availability on Blu-ray just got better with the release of Disney/PIXAR's Cars and even better in a combo pack.  The fun film with an extraordinary plot that offers moral values like friendship, honesty, love and integrity is perfect for the whole family.  The film has been released in a combo pack that contains the 3D Blu-ray, Blu-ray and DVD and offering a carload of bonus features on the Blu-ray disc.

The story goes like this; Lightning McQueen's (voice of Owen Wilson) the top racer in the country and has just been let down because of a dispute with the final race of the Piston Cup.  Not the happiest of motor cars, he heads to his next location.  On the way he gets waylaid in the small town of Radiator Springs being held there until he fixes a road that his car damaged.

While there he meets the lovable Mater (voice of Larry the Cable Guy) a rundown tow truck that bonds with McQueen while helping him to get his car back on the road and fix the damage.  He may not have a lot of smarts, but he does know the meaning of friendship, something McQueen has avoided most of his career.  The town is filled with good people including Doc Hudson (voice of Paul Newman), Luigi (voice of Tony Shaloub) and Guido (voice of Guido Quaroni).  When he meets the town cutie Sally Carrera (Bonnie Hunt) he finds out that there's more to life besides racing for trophies.

The film is perfect for the whole family with characters that are funny, meaningful and teach good family principles. The children will love the comical situations Mater gets into and the older folks will identify with the town that has a past.  Nicely developed the cars, trucks and other motor vehicles all take on a personality, have everyday problems and work hard to make the town survive the bypass that turned the place into a ghost town.

The 3D manipulation of the original is very pleasing, shows a lot of depth of field and brings the story up close.  The artists have added just enough popping to not over exaggerate, but add some realistic fun to the film.  I'm a proponent of 3D for the home and the more that make it available the better.  While it works best with animation, some of the live action films have been improving with creative 3D action.  In Cars it's the 3D depth of field that makes it work giving the feel that the characters are in the room.

The video quality is exceptionally good with the Blu-ray and 3D 1080p High Definition, 2.39:1 Aspect Ratio, and on the DVD widescreen enhanced 16x9 TV's.  Everything is crystal clear and shows great on my HD Television.  I like the way the artists have enhanced the colors, especially on McQueen and Sally during their romantic ride.

I like the sound quality with clear and easy to understand dialogue, very good surround capabilities and explosive roars during the race. The special effects sounds are great also, especially in the repair shop with Luigi and Guido changing tires.  If you have an upgraded system that takes the 5.1 Dolby Digital TrueHD Blu-ray, or 5.1 Dolby Digital EX on DVD you may want to have some fun by ramping it up during the race between Doc and McQueen.

The special bonus features are very good and available on the Blu-ray disc.

"Audio Commentary" a choice of commentary by Director John Lassiter or you can turn on the voices of the animators.  I found it real cool to listen to the animators.

Under Bonus Features, you will find the following Blu-ray Exclusives:

"Boundin Cars" If you remember the PIXAR short Boundin, here's a reanimation of the skit with cars

"Movie Showcase" goes into the new Blu-ray technology used for the film.

"Documentary Shorts" PIXAR puts together their behind the scenes in seven short documentaries titled ‘Radiator Springs', ‘Character Design', ‘Animation and Acting', ‘Real World of Racing: Getting Geeky with the Details', ‘Hudson Hornet' and more.

The following Bonus Features are on both the Blu-ray and DVD:

"Mater and the Ghostlight" a comical cartoon for the kids

"One Man Band" a short animated film that played before the feature in theaters.

"Inspiration for 'Cars'" director John Lasseter talks about where the idea came for the animated film.

"Deleted Scenes" there are four scenes that were never completely animated.

FINAL ANALYSIS:  If you have not purchased the Blu-ray in the past, here's a chance to get a collectors copy that includes the 3D Blu-ray. (B)