Home / Movie Database / Alvin and the Chipmunks: The Road Chip Through a series of misunderstandings, Alvin, Simon and Theodore come to believe that Dave is going to propose to his new girlfriend in Miami…and dump them. They have three days to get to him and stop the proposal, saving themselves not only from losing Dave but possibly from gaining a terrible stepbrother.

Purchase DVD/Blu-ray/4K physical copy of Alvin and the Chipmunks: The Road Chip today at

Download Alvin and the Chipmunks: The Road Chip in Digital HD/4K from the iTunes store.

Alvin and the Chipmunks: The Road Chip images are © 20th Century Studios. All Rights Reserved.

Alvin and the Chipmunks: The Road Chip Blu-ray Review 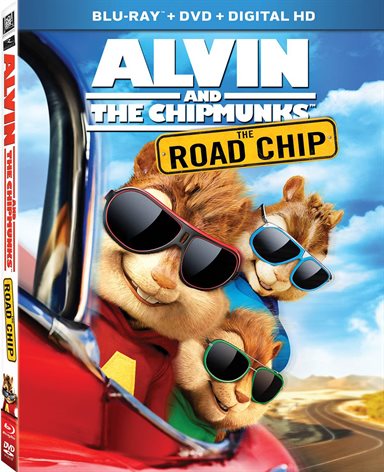 Those lovable chipmunks are back, and this time they are headed on a Road Trip, or, aptly called in the chipmunk vernacular,  "A Road Chip"

Dave has decided it is time for The Chipmunks to settle down in life and concentrate more on being teenagers than living the life of musicians. Aside from that, not much has changed for our little furry friends since the last film. They are still up to their hi-jinx that set Dave's blood on fire. One big change however, is Dave's new girlfriend, Samantha, and her son Miles. As one would expect from real world experiences, sometimes children of dating parents don't' get along and that is certainly the case of Alvin, Simon and Theodore and Miles. Miles consistently taunts the boys, as well as putting them in very uncomfortable situations. However, once it is found out that this situation might be more permanent than thought when an engagement ring is found, the children put aside their differences and embark on a crazy road trip to stop the event.

On the human casting side, Jason Lee (My Name is Earl) is back as Dave Seville. He is accompanied by his new girlfriend, Samantha, played by Kimberly Williams-Paisley(Nashville), and her son Miles (Josh Green; The Girl in the Book ). Rounding out the human cast is Tony Hale (Chuck) playing the villainous Air Marshal Suggs who has a personal ax to grind with the furry main characters, and Bella Thorne (Shake It Up!) playing the pop star Ashley Grey. While most of the attention is focused on the Chipmunks, the "human" characters, as usual, do a great job interacting with them.

All of the Chipmunks voice actors are back including Justin Long (Tusk), Matthew Gray Gubler (Criminal Minds), Jesse McCartney (Chernobyl Diaries), Christina Applegate (Vacation),  Anna Faris (Observe and Report), and Kaley Cuoco (The Big Bang Theory). As with past films, their voices perfectly fit their characters.

Alvin and the Chipmunks: The Road Chip video is a AVC encoded 1080p transfer in 1.85:1. It is a very good transfer with no visible blemishes, noise, or  artifacting. The audio presented in DTS-HD 7.1 contains a good dynamic range providing dialog that is crisp and clear, as well as having the musical numbers fill the room.

Apart from the DVD and Digital HD copy of the film, there are, surprisingly, a plethora of extras to be found in the Alvin and the Chipmunks: The Road Chip.

Alvin and the Chipmunks: The Story So Far - A recap of the first three films.

Cue the Chipmunks: The Great Big Chipmunks Music Finale - Behind the scenes look at the filming of the films final number.

Our Furry Planet - A cute "mockumenatary" about the history of a different type of chipmunk.

Alvinisms - The best (and worst) Alvin moments throughout the series.

Ultimate Playlist - The music of the chipmunks

After the Party: A Munkumentary - Redfoo discusses his involvement with the chipmunks

Bound for Georgia - Highlighting the filming locations used for Alvin and the Chipmunks: The Road Chip

Road Chippin' Through Georgia - Behind the scenes footage on the production.

If you are a fan of the last three Chipmunks films, you will thoroughly enjoy this film. The comedic moments are there throughout the entire run-time, as well as having a great heart and soul with a concrete message about family.

coreyanthony26
Looks Like Chipmunks Know how To Party On The Road Cause they are number 1 Party Animals
3/6/2016 3:54 PM EDT

movieman24
I thought 3 was enough but these Chipmunks want to go on a World Movie Musical Tour I got my concert Movie tickets to go see them
3/26/2015 11:29 PM EDT