In the Watergate Building on June 17, 1972, lights go on and four burglars are caught breaking into the offices of the Democratic National Headquarters. That night triggered revelations that would eventually drive a U.S. President from office. Washington Post reporters Bob Woodward (Robert Redford) and Carl Bernstein (Dustin Hoffman) grabbed the initial break-in story and stayed with it through doubts, denials and discouragement. All the President's Men is their story.

Directed by Alan J. Pakula and based on the best-selling Woodward/Bernstein book, the film was nominated for eight Academy Awards (including "Best Picture"), winning four, including "Best Supporting Actor" for Jason Robards' brilliant performance as Post editor Ben Bradlee.

This memorable true-life movie also expertly explores the inner-workings of a working daily newspaper, where the mission is to not only get the story - but also to get it right.

Download All the President's Men in Digital HD/4K from the iTunes store.

All the President's Men images are © Warner Bros.. All Rights Reserved.

All the President's Men Blu-ray Review 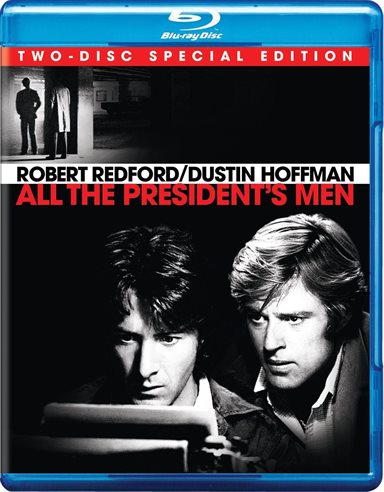 The year 2013 has been called the fortieth anniversary of the Watergate Scandal, but it's hard to tie "Watergate" to a specific point in time. The affair spanned three calendar years beginning with the arrest of the so-called "White House Plumbers" during a break-in at Democratic National Committee headquarters on June 17, 1972, and ending with the resignation of President Richard Nixon on August 9, 1974. However, 1973 was arguably the most eventful of Watergate's three years. It was during the summer of 1973 that the nation sat transfixed before its television screens as the select committee chaired by Senator Sam Ervin heard day after day of unprecedented testimony about suspected criminal activity in and around the Oval Office, including the riveting four days during which former White House counsel John Dean blew the whistle on his former client, the President of the United States.

It was also in 1973 that White House assistant Alexander Butterfield revealed the existence of a secret taping system in the Nixon White House, leading the special prosecutor appointed at Nixon's behest to subpoena the tapes. Nixon then ordered the same Attorney General who had appointed the special prosecutor to fire him, and the Attorney General resigned in protest, as did his second-in-command, in what came to be known as the "Saturday Night Massacre". Closing out a memorable Watergate year, in December 1973, the White House disclosed that a key tape had developed a "gap" lasting eighteen and half minutes during a critical conversation. Nixon's secretary tried to explain the gap as an accident during transcription, but no one believed her. In the course of the year, a President who had been inaugurated with the mandate of a landslide had fallen so far that he had to reassure the public: "I'm not a crook!"

For the film All the President's Men, 1973 has additional significance. It's the year The Washington Post won the Pulitzer Prize for the reporting by Bob Woodward and Carl Bernstein depicted in the movie. In observance of the occasion, Robert Redford, who played Woodward, executive produced and narrated a documentary entitled All the President's Men Revisited, which aired on the Discovery Channel on April 21, 2013. Warner is releasing the documentary on Blu-ray, paired with a reissue of its previous Blu-ray of All the President's Men.

Revisited assumes a degree of familiarity with director Alan J. Pakula's 1976 film, most of which was set in 1972 as Woodward and Bernstein (Redford and Dustin Hoffman) first began to unravel the conspiracy and cover-up inside the Nixon White House. At the close of the film, Nixon has just been re-elected, and the reporters' editor, Ben Bradlee (Jason Robards), tells them that half the country never even heard of Watergate—so get back to work. A montage of sound and video clips fast-fowards to Nixon's resignation nearly two years later.

Revisited takes a closer look at what happened during that period. Many of the participants are no longer alive. Of those who are, many would be understandably reluctant to discuss their roles, but there are exceptions. John Dean, elderly but still strong, has lost none of his clarity of thought or expression. Egil "Bud" Krogh, the former head of the Plumbers, is more articulate with his face than his words, but he is a compelling presence. Former Sen. Fred Dalton Thompson, a member of the select committee, brings the authoritative tone that got him cast in so many films as commanders and senior military officers. Former Congresswoman Liz Holtzman, a member of the House Judiciary Committee that voted to impeach Nixon, provides a gripping account of the experience. Alexander Butterfield describes how the tape system was installed and gives a vivid description of Nixon's famous awkwardness with people. Former Nixon speechwriter Ben Stein, who still worships his old boss, provides a surprisingly emotional counterpoint.

Woodward, Bernstein and their former editor Bradlee reunite for a visit to the Post's current offices and provide comments from their present-day perspective. They are joined by a host of younger political commentators such as Jon Stewart and Rachel Maddow, who reflect on the meaning of Watergate as a political landmark. But perhaps the most interesting observations are those of "Morning Joe" Scarborough, who comments on the radical disjunction between what the country thought it was getting when it elected Nixon and what it actually got. A running theme throughout many of the comments is the almost unfathomable split between the former President's exceptional gifts—formidable intelligence, deep knowledge of public affairs, boundless capacity for work—and a flawed character that drove him to sabotage his own achievements.

A secondary element in Revisited is the making of All the President's Men. Redford contacted Woodward about possibly making a movie, even as the young reporter was still pursuing the story. He recalls watching the Senate hearings while sitting in his dressing room on the set of The Great Gatsby. In a rare reunion, he and Dustin Hoffman recall how they went about re-creating the unusual partnership between Woodward and Bernstein that was essential to energizing a film that was, in the end, mostly about typing, phone calls and interviews.

A highlight of Revisited is the section on the source famously identified as "Deep Throat" (Hal Holbrook in the film) and finally revealed in May 2005 as FBI Associate Director Mark Felt. Interviews with Felt's daughter and comments by Bernstein provide closure to a loose end in the story that had led many to speculate the source was a fiction invented by Woodward and Bernstein.

Accompanying the contemporary interviews are excerpts from archival news broadcasts, footage of the Senate select committee hearings, the impeachment vote, Nixon's resignation, his farewell to his staff and many other items. They have been well-selected, and for some they will stir strong (and not always pleasant) memories.

Revisited was shot on hi-def video and has been encoded at 1080i on a BD-25 with the AVC codec. The contemporary footage has the clean, clear, colorful look that one would expect from recent footage shot for TV, with the only flaw being occasional combing and motion artifacts attributable to the 1080i formatting. This usually appears on vertical pans and is a brief and momentary distraction. The archive footage is mostly standard definition video, and it looks about as good as it can, which is to say that it's grainy and ordinary. Excerpts from All the President's Men appear to come from various sources; some look as good as the Blu-ray version, while others could be DVD. The audio for Revisited is basic Dolby Digital 2.0 at the standard bitrate of 192 kbps. It's perfectly adequate for the talking heads and background score by Nathan Halpern. Subtitles are available in English SDH, German SDH, Italian, Spanish and Portuguese, as well as Japanese when that language is selected as the player default.

You may have lived through Watergate yourself, or have learned about it in school, but All the President's Men makes it all come alive in a thrillingly visceral way. One of the best ever films about what the day to day grind of a newsroom is all about, even in an epochal story like Watergate, All the President's Men is probably Pakula's all-around finest film, and it features a bevy of knockout performances. This Blu-ray's image quality leaves something to be desired, but otherwise this is an excellent release.  Highly recommended.