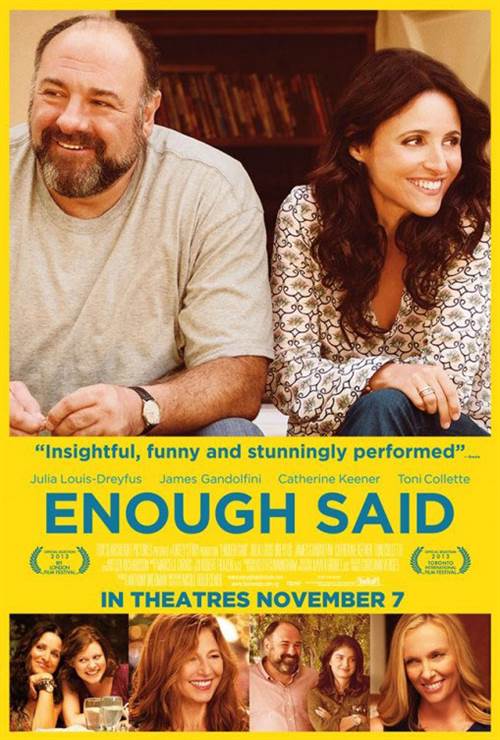 A divorced and single parent, Eva (Julia Louis Dreyfus) spends her days enjoying work as a masseuse but dreading her daughter's impending departure for college. She meets Albert (James Gandolfini) - a sweet, funny and like-minded man also facing an empty nest. As their romance quickly blossoms, Eva befriends Marianne (Catherine Keener), her new massage client. Marianne is a beautiful poet who seems "almost perfect" except for one prominent quality: she rags on her ex-husband way too much. Suddenly, Eva finds herself doubting her own relationship with Albert as she learns the truth about Marianne's Ex. ENOUGH SAID is a sharp, insightful comedy that humorously explores the mess that often comes with getting involved again

Stream Enough Said in Digital HD/4K from the AppleTV store. 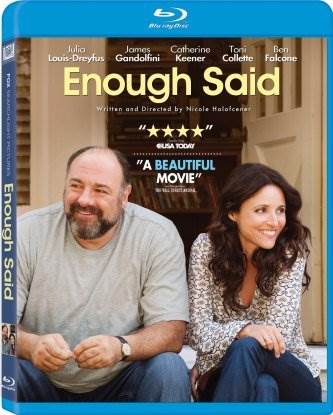 Will James Gandolfini be the latest recipient of a posthumous Academy Award nomination? The Academy Awards haven't been shy about recognizing deceased performers and behind the scenes craftsmen from literally the first year the statuettes were handed out. Many other less generally known names have received at least nominations through the years, and it might be stated that some of them anyway were what might be termed "career recognition", not necessarily an indication of absolutely outstanding work for whatever film actually brought them their acknowledgement. That is probably the case should Gandolfini be among the quintet of actors named in the Supporting category, for his genial work in Enough Said, a rom-com so low key as to seemingly be on life support some of the time, doesn't really stretch the actor in any meaningful way. Gandolfini is wonderfully rumpled and lived in in the role, but it's hardly the "showy" kind of performance that generally takes home the trophy. Still, my hunch is Gandolfini will be recognized with at least a nomination, if only because his untimely death so shocked a community where he was evidently universally loved and admired. The film itself—well, that's a somewhat more mixed bag.

Julia Louis-Dreyfus plays Eva, a middle aged masseuse who has been divorced for around ten years and is facing the incipient departure of her college aged daughter Ellen (Tracey Fairaway). Eva accompanies her married friends Sarah (Toni Collette) and Will (Ben Falcone), where almost immediately she's more or less deposited next to a woman she's never met, a self-described poet named Marianne (Catherine Keener). Later, she complains to Will that absolutely none of the men at the party have captured her fancy, a statement that Will rather insensitively repeats to two new (male) arrivals at the party, one of whom is Albert (James Gandolfini). Eva is obviously embarrassed, but Albert helps her to save grace in a rather unlikely way by telling Eva there are no women there that he finds attractive. And so a rather odd romance begins to blossom.

I'm well aware that Enough Said has been something of a critics' darling this past year, reaping a rather surprisingly consistent amount of praise since its release. Perhaps I'm cynical but my personal opinion is that at least some of the accolades being heaped upon the film stem from the shock of Gandolfini's death. Some readers may disagree but I'd argue for a bit of perspective on both the pleasures and pitfalls Enough Said provides. A few theatrical reviewers have pointed out the shallowness of the script, as well as the absolutely annoying second act denouement that hinges on one of those coincidental conceits that only ever takes place in films. A lot of the dialogue is awkward and stilted, and not always only when it's supposed to be. The film has a proto-indie spirit which is okay as far as it goes, but when you have the considerable (though arguably small screen) star wattage of Louis-Dreyfus and Gandolfini, both bringing "television baggage" along with them whether or not they want to, there's a certain disconnect between the material and the performers.

The saving grace here is, ironically enough, the overall heartfelt tone of the piece, which helps to elevate what are essentially non demanding performances from the stars. Louis-Dreyfus has her typical charm, even if one never quite believes her angst and fussiness. Gandolfini is, as mentioned above, wonderfully disheveled and natural, but Albert never really makes much of an impression, at least until a major showdown toward the end of the film, something Gandolfini and Louis-Dreyfus play extremely well. Keener is fine in a somewhat underwritten part that is basically there only to provide a supposed reveal that most students of Screenwriting 101 will see coming long before it actually arrives. Collette and Falcone are fun in what are basically glorified cameos.

Enough Said is presented on Blu-ray courtesy of 20th Century Fox Home Entertainment with an AVC encoded 1080p transfer in 1.85:1. This feature is suffused with the brilliant amber glow of Los Angeles, and benefits from a surfeit of bright primary colors which pop really nicely throughout the presentation. Enough Said's lossless DTS-HD Master Audio 5.1 is a perfectly reasonable track for what is in essence a rather unassuming and quiet dialogue driven film. There is some nice surround activity in sequences like the opening cocktail party, where the crush of crowd conversations and tinkling of wine glasses dot the surrounds, or later, when Marianne and Eva walk above the ocean and the soundfield is filled with nuanced ambient environmental noises, but really the bulk of this film generally is two people talking to each other, where of necessity immersion isn't of primary importance.

Special Features: Don't get me wrong—Enough Said is a perfectly sweet little film, and it's actually rather touching at several key moments. But I just don't think it's the Second Coming of rom-coms that quite a few other critics evidently feel it is. Louis- Dreyfus and Gandolfini make for a charismatic and easily accessible (and lovable) couple, but the writing is still somewhat problematic, especially in a completely predictable and frankly off putting development about halfway through the film that may make even those who have loved the movie up to that point throw up their hands in annoyance if not outright disappointment. Still, it's a pleasure to see Gandolfini especially playing against (perceived) type, and though Enough Said may be too low key to warrant much other consideration, my hunch is there's a Best Supporting Actor nomination about to be added to Gandolfini's still untimely epitaph.