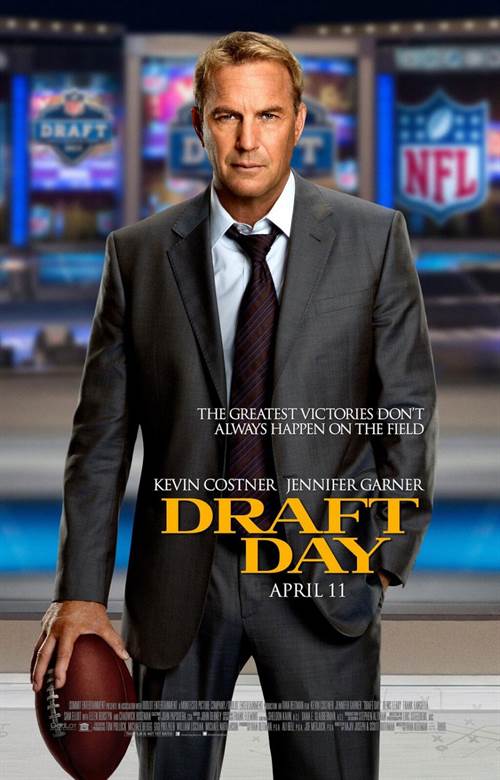 On the day of the NFL Draft, general manager Sonny Weaver (Costner) has the opportunity to rebuild his team when he trades for the number one pick. He must quickly decide what he's willing to sacrifice in pursuit of perfection as the lines between his personal and professional life become blurred on a life-changing day for a few hundred young men with dreams of playing in the NFL.

Stream Draft Day in Digital HD/4K from the AppleTV store. 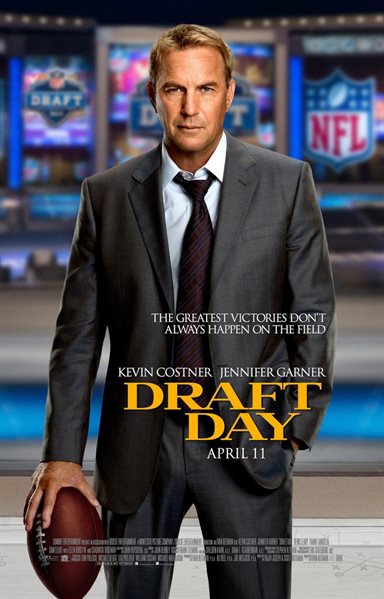 With the NFL Draft a month away, the movie Draft Day will be hoping for a lengthy run at the box-office. The film takes you to the innards of high pressure picking and trading not seen during a real NFL draft.  We saw one side of the coin, player management, in the movie Jerry Maguire when it was released in 1996, but here we get a Hollywood look at what happens in the back rooms of the teams holding all the cards.

On May 8, 2014 the real NFL Draft taps the television screen awaking what football sports fans call the game changer.  It's the day top college contenders wait for a possibility at being chosen the number 1 pick with a pay day of mega bucks in the balance.  While that honor is bestowed on just a few prospects, others just want to be picked in the first round or chosen for a team at all.  It's nerves on edge for the players and cagey backroom trading for the team general managers. In this year's draft the Huston Texans are tagged with the number 1 choice.  Right now it looks like Jadeveon Clowney, a Defensive End from South Carolina University, has the edge on getting chosen number 1.

When the film opens it's about 12 hours before the NFL teams start choosing their players and Sonny Weaver (Kevin Costner) General Manager of the Cleveland Browns has arrived at his office with expectations of choosing a contender with his pick at number 7.  He hasn't got the first pick as the Seattle Seahawks are holding that choice slot with the much touted Heisman Trophy winner from Wisconsin, Quarterback Bo Callahan (Josh Pence), at the top of their list.

Sonny's thoughts and Brown's Head Coach Penn (Denis Leary) are on Ohio State linebacker Vontae Mack (Chadwick Boseman) who will be a much needed defense building block for their team. Owner of the Browns Anthony Molina (Frank Langella) is not excited over the choice since their quarterback injured his knee in game 6 this past season and wants one from the draft. Making Sonny's choice even more difficult, ex-Cleveland Brown great Earl Jennings (Terry Crews) wants his son Ray (Arian Foster), a top Running Back, chosen in the first round to play for the Browns. Sonny's salary-cap specialist Ali (Jennifer Garner) knows her football and has Sonny's back on making the best choice for the team.  When Sonny gets an opportunity to trade three first round picks for a chance to pick number one, things start to get real heated up for the Browns.

The emotions run high as Sonny starts to maneuver his chances in the draft. Director Ivan Reitman works his magic creating a lot of tension, scheming, bartering and sets up the audience for some cool twists.  He meshes the whole experience of a real draft involving football player managers, team general managers, players, coaches, assistants with the floor and stage of Radio City Music Hall at a real draft taking place.  It's the big show for this year's upcoming fall Pro Football season and Reitman does it up right.

Kevin Costner does a terrific job of bringing the shrewd character Sonny Weaver to life on the screen. He exhibits all the emotions of a man under fire with his job in jeopardy if he makes the wrong decisions.  He shows Sonny's daring, taking chances on future seasons by rolling the dice in an attempt to get it all. Facing his boss Molina, played expertly by Frank Langella, he puts his choice and deals on the line between another year with the Browns or a swift exit from the game.

As the Browns dubious new coach who is starting his first year with the Cleveland Browns after being the Super Bowl winning coach of the Dallas Cowboys, Denis Leary as Coach Penn puts on a good show.  He demonstrates a number of personality changes during the film as Sonny goes through his paces making deals without confiding in him.  When the offer comes in for the number one choice Penn balks in anger at the possibility of losing a chance at getting Vontae Mack, even threatening to resign.

The cinematography using a special split screen 3D-esque filming is very cool.  Instead of just seeing Sonny on the screen or a split between him on the phone and to whom he is talking on the other line, we get a different view of him walking around the screen while we see the person on the other line talking to him.  This happens several times during the movie and the effect is remarkable. The filming of the real NFL Draft Day in 2013 with the characters in the film taking the stage is a feat in itself.  Stars playing roles sit alongside the actual persons waiting to do their jobs while reciting their dialogue for the movie. Although it's not extensive, it brings a realistic view of the excitement needed to make the film work.

Draft Day has been rated PG-13 for brief strong language and sexual references. Pro Football fans of all ages that are into the game and know how exciting football can be should also like the tension on how their favorite players are chosen no matter how fictionalized.

FINAL ANALYSIS: A pressure packed film for those who love football. (C+)