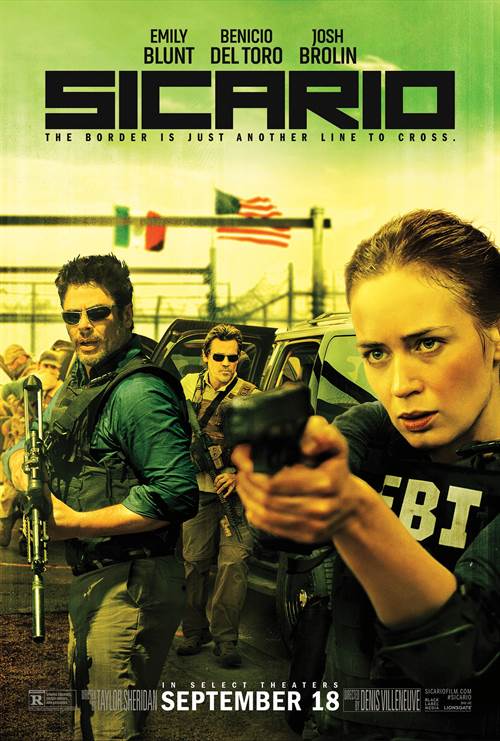 In the lawless border area stretching between the U.S. and Mexico, an idealistic FBI agent (Emily Blunt) is enlisted by an elite government task force official (Josh Brolin) to aid in the escalating war against drugs.

Led by an enigmatic consultant with a questionable past (Benicio Del Toro), the team sets out on a clandestine journey forcing Kate to question everything that she believes in order to survive.

Download Sicario in Digital HD/4K from the iTunes store.


Sicario Sequel Planned with Benecio Del Toro as Lead  9/22/2015 2:09 PM EST
Lionsgate has announced that they are planning on releasing a sequel to Sicario, their new film that was in limited released on September 18. The film will focus on Benicio Del Toro's hitman character.Patrick Wachsberger, co-chair of the studio's motion picture group, said, "Before the release of this movie, I was talking to Denis and I said what happened to this character? Where is Benicio going?...  More>> 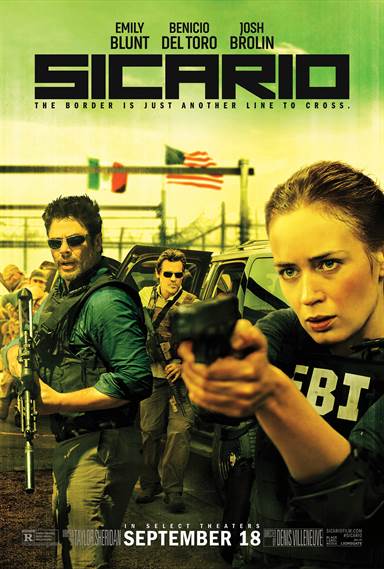 FBI Agent Kate Macer (Emily Blunt; The Edge of Tomorrow, Looper) is very good at her job on the FBI kidnapping task force. However, on her last raid, things went a little out of the ordinary after the house was discovered to contain a large amount of bodies. So distraught was agent Macer that she was the prime pick to be part of an inner-agency task force that would find the men ultimately responsible for this crime and have them brought to justice.

This inner-agency task force, headed Matt Graver (Josh Brolin; Everest, Men in Black III), will stop at nothing to reign in these drug lords; even employing a man, Alejandro, with a questionable past (Benicio Del Toro; Traffic, Guardians of The Galaxy) to help them accomplish their goals. All of this, plus using unconventional methods, has agent Macer question her beliefs and what her life means in the process.

Not since Steven Soderbergh's Traffic has their been a film quite like Sicario. It is intense and brutally honest about the situation in Mexico and just north of the Mexican border. Director Villeneuve skillfully navigates the screenplay by Taylor Sheridan, turning even the most simplistic scenes into heart-pounding suspense. However, Villeneuve did not do this alone, as he skillfully employed cinematographer Roger Deakins (The Shawshank Redemption, Prisoners) and composer Johann Johannsson (The Theory of Everything, Prisoners) to help heighten the intensity of the film through visuals and sound.

Emily Blunt and Benicio Del Toro truly drive this film along and help shape it from a mediocre suspense/action film into the critically praised film that has been receiving rave reviews since it was first screened during the Cannes Film Festival. Blunt seems to have vested her entire self into the portrayal of agent Kate Macer, showing how empty and lonely she is because of her job, and how she reacts to the task forces actions that unfold around her. Meanwhile, Benicio Del Toro is simply at his best. It as if the role of Alejandro was the part his entire acting career has led him to. He makes viewers hang on to every mannerism or word that his character is speakimg. The rest of the cast members, including Brolin, Daniel Kaluuya (Date Night, Kick-Ass 2) and Victor Garber (Alias, Argo) help to flesh out the cast nicely, but are ultimately forgettable roles.

While most of the film's story is quite plausible, I had a very hard time with some of the actions of Emily Blunt's character carried out in the film. More than a few times, I found myself questioning how someone in her position could be so naive about the world around her, and, by the end of the film, found myself wishing her character had a different ending than what was included.

The critical praises lavished on this film, and strong box office numbers from its former limited release, has  Lionsgate, Black Label, and production company Thunder Road, already started pre-production talks for Sicario 2. The film will focus primarily on Benicio Del Toro's Alejandro character, and what has made him what he is and where is going in life. Even though I cannot predict the road that Alejandro will take in the sequel, I will tell you that come Oscar time, Sicario will be on everyone's short list.