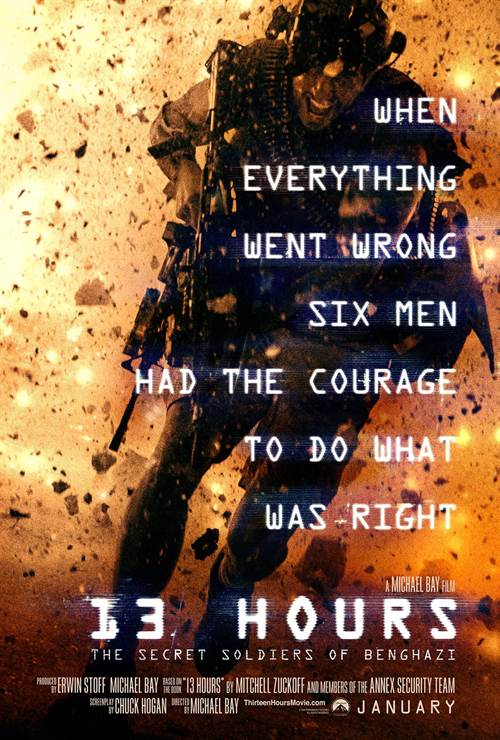 From director Michael Bay, “13 Hours: The Secret Soldiers of Benghazi” is the gripping true story of six elite ex-military operators assigned to protect the CIA who fought back against overwhelming odds when terrorists attacked a U.S. diplomatic compound on September 11, 2012. When everything went wrong, six men had the courage to do what was right.

Stream 13 Hours: The Secret Soldiers of Benghazi in Digital HD/4K from the AppleTV store.

13 Hours: The Secret Soldiers of Benghazi images are © Paramount Pictures. All Rights Reserved. 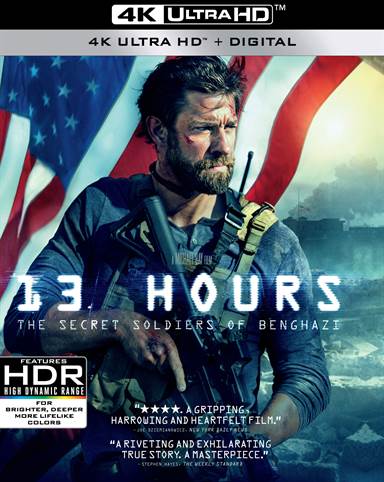 It all began eleven years earlier on September 11, 2001, with the attack on United States soil that saw the deaths of over 3,000 people.  Then five weeks later Muammar Gaddafi, the deposed leader of Libya, was captured and killed near Sirte, which leads to years of unrest in the Arab state.  Warring rebel groups fought for control of the country leading to one of the most unstable and dangerous areas in the region.  Benghazi was amongst the most volatile areas, which ultimately led to the events of September 11, 2012.  The details were chronicled in the book 13 Hours: The Secret Soldiers of Benghazi by Mitchell Zuckoff and eventually became the basis of the Michael Bay (Transformers) film of the same name.

Jack Silva (John Krasinski; A Quiet Place) is an ex-Navy Seal who heads to Libya as part of a group of private military contractors sent to guard "The Annex", an undercover CIA outpost in Benghazi.  He and five other men of the Global Response Team are meant to keep a low profile as they travel around the city.  Not knowing who is friendly and who would likely shoot them in the back, they are always on their guard.

One mile away is a diplomatic compound with minimal security in place.  So when U.S. Ambassador Chris Stevens (Matt Letscher; Her) comes to maintain diplomatic connections, tensions run high.  On September 11, 2012, the compound is overrun and Stevens and his security are killed but not before the contractors try to rescue them.  As they make their way back to the Annex they realize they have been followed and prepare for the onslaught of insurgents coming to kill them.  What ensues is a night full of lulls followed by moments of gunfire, bombs, and prayers as they radio for help.

Krasinski leads a terrific cast of actors including James Badge Dale (The Departed) as Rone, Pablo Scheiber (American Gods), as Tanto, David Denman (Brightburn) as Boon, Dominic Fumusa (Nurse Jackie) as Tig and Max Martini (Pacific Rim) as Oz.  The guys have great chemistry which is part of what makes them work as a "well oiled" machine though the dialogue tends to be technically heavy and hard to understand at times.  David Constable (Breaking Bad) is also strong as the Annex chief "Bob" who seems to resent their presence and let s them know it at every possible moment.

The 2160p high definition Video quality with a 2.40:1 aspect ratio is solid but not the best I have seen. Interestingly, it gets better as the movie progresses with the opening being more grainy and the latter half of the film offering sharp details like the sweat dripping off the soldiers' foreheads.  The Dolby Atmos audio really shines through as gunfire and bombs explode from all angles of the surround sound.  The Blu-ray disc houses the extras which include: For the Record: Finding the Truth Amid the Noise, Uncovering Benghazi's Secret Soldiers, Preparing For Battle: Behind the Scenes of 13 Hours, Operation: 13 Hours Premiere and, In Memoriam.  The last is a short but touching tribute to the lives lost in the attack.

While Bay doesn't go over the top with explosions, as is his usual flare there is still plenty of action to be found.  Too much if you ask me as some fighting scenes are too long making the films run time excessively two and a half hours and taken at the expense of the plot.  There is very little character development, which would have made the audience more invested rather than seeing the characters as the muscle in a means to and ends scenario.

Regardless of your political views, 13 Hours: The Secret Soldiers of Benghazi is a fairly well put together film that will appeal to ex-military and those interested in military-style films  For me it was interesting enough to hold my attention much of the time but lacked more plot to keep me engaged.