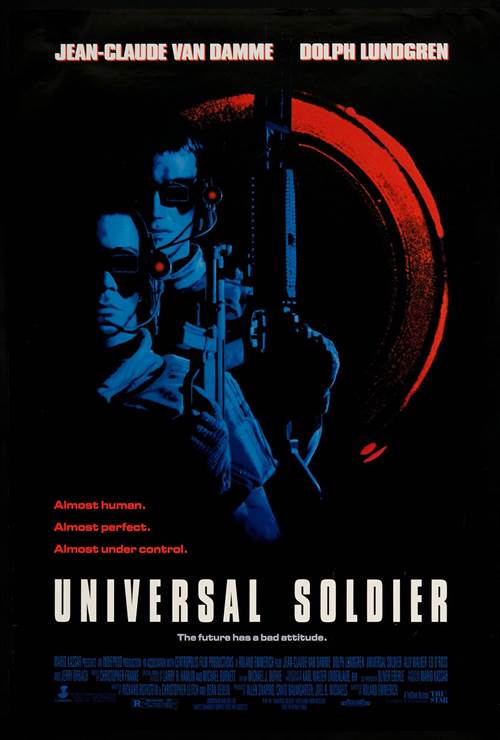 Roland Emmerich (2012, WHITE HOUSE DOWN) directs a classic action/sci-fi thrill ride starring Jean-Claude Van Damme and Dolph Lundgren as soldiers who kill each other in Vietnam but are brought back to life decades later for a secret government program. Known as "Unisols," the genetically enhanced soldiers are now unstoppable killing machines without feelings or free will. But when Deveraux (Van Damme) starts to have flashbacks to his old life, he escapes from the program and sparks a superhuman chase across the country.

Stream Universal Soldier in Digital HD/4K from the AppleTV store. 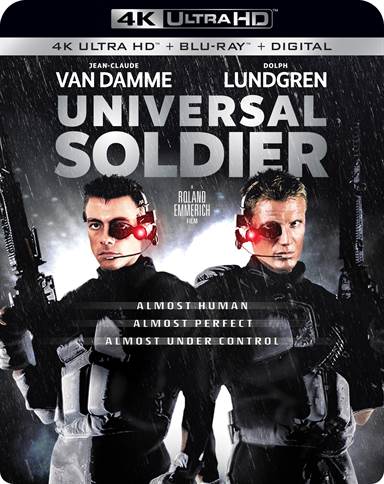 The 1980s and early 1990s saw a growth in action films in the United States; a trend that seems to have continued well into recent years.  Stars like Arnold Schwarzenegger (The Terminator), Sylvester Stallone (Rocky, Rambo) and Bruce Willis (Die Hard) were becoming household names.  Car chases, gunfights, and hand to hand combat were the norm and seemed to be craved by movie-going audiences. In 1992 director Ronald Emmerich was on that action bandwagon when he shot Dolph Lundgren (Rocky IV) and Jean-Claude Van Damme (Double Impact) in a movie called Universal Soldier.  This week the movie heads to stores in 4K UHD.

The year was 1969.  The U.S. Army was in North Vietnam.  Luc Deveraux (Van Damme) and his squad were sent to secure a village But Deveraux finds everyone dead with their ears cut off.  He discovered his Sergeant, Andrew Scott (Lundgren) had gone crazy, killed them all and made a necklace out of their ears.  He was also holding a young couple hostage but shot the man and, when Deveraux tried to save the young woman, Scott killed her with a grenade. Then Scott and Deveraux confronted each other and shot each other dead.  Officially listed as "missing in action" their bodies were cryogenically frozen.

Fast forward to the present and their bodies are reanimated but their memories wiped. Deveraux and Scott have become part of an experimental government program called Universal Soldier or UniSol.  They are an elite counter-terrorist unit controlled by scientists. However, after one mission Deveraux starts to remember the past.  Meanwhile, television Journalist Veronica Roberts (Ally Walker; Profiler) sneaks onto the military base where the Universal Soldiers are kept and discovers the truth. Suddenly she finds herself with Deveraux while the two of them are on the run from the other UniSols who are trying to kill them.

Emmerich does the best he can with what he is given to work with but that isn't really saying much.  The script is mediocre and, let's face it, Van Damme and Lundgren aren't especially known for their skills as thespians.  What Emmerich does do is present some very good action sequences which is probably why he was offered the opportunity to direct Independence Day.  I will say that this role showed more of Lundgren's acting ability than we have seen from him in other films and Van Damme offers a softer side-emitting empathy for other human beings. Walker is decent and works well with Van Damme.

Studiocanal once again has done a pretty good job with the remaster here. The 2160p resolution is an improvement from the Blu-ray as details are sharp with very little graininess present.  Their transfer to Dolby Vision pays off.  It's a shame Studiocanal didn't also didn't invest in Dolby Atmos audio for this feature.  The DTS-HD Master Audio 5.1 is good but Atmos would have bumped it up a notch.  The 4K Has the following extras: Audio commentary by Roland Emmerich, Dean Devlin, Jean-Claude Van Damme, and Dolph Lundgren, Audio commentary by Roland Emmerich and Dean Devlin, "A Tale of Two Titans" Featurette, "Guns, Genes, and Fighting Machines" Featurette, Alternate Ending, "Behind the Scenes" Featurette, and the Trailer.

There is very little that makes Universal Soldier a classic though it does have a limited following.   Emmerich's direction is probably the best thing about the movie but there isn't much more to entice an audience.  The action sequences are mostly pedestrian and, quite frankly, the story borders on being a little creepy.  The 4K quality is the reason to buy this release but I suspect unless you are a true fan of the movie you won't pick this one up.