When heroes alone are not enough…the world needs legends. Having seen the future, traveling rogue Rip Hunter assembles a disparate group of both heroes and villains to confront the unstoppable threat of the immortal Vandal Savage— a threat which not only puts the planet at stake, but all of time itself. From the creators of The Flash and Arrow comes this super hero team-up that combines characters from both shows — in addition to new heroes from the DC Comics pantheon. Featuring Arrow’s Brandon Routh as The Atom and Caity Lotz as the resurrected Sara Lance/White Canary; with The Flash’s Victor Garber as Dr. Martin Stein alongside Wentworth Miller as Captain Cold and Dominic Purcell as Heat Wave; plus, the newest heroes Rip Hunter, Jeff Jackson and the reincarnated warrior queen Hawkgirl, this singular super hero spinoff series pits the ragtag team against one of the most powerful villains in the DC Comics universe.

Download DC's Legends of Tomorrow in Digital HD/4K from the iTunes store. 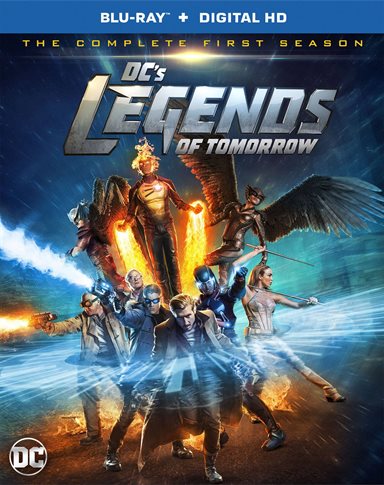 Following the path of Arrow and The Flash,  DC's newest tv show, Legends of  Tomorrow creates a new path, bringing to life new characters we can all relate to and want to be. Legends is a pure genius combination of Doctor Who, Quantum Leap, and Avengers, all rolled up in one- taking the best qualities of each of those shows and bringing them together under one Time Machine.  Heroes and villains- or more like deviants- unite to help a Time Master, Rip Hunter, from the 22nd Century, ironically played by an already experienced time traveller, Arthur Darvill (Rory, Doctor Who).  They are recruited to travel back in time to kill an immortal, Vandal Savage (played by Casper Crump), who killed Hunter's wife and family and created chaos in Hunter's time line.  Crump has excelled at playing this sadistic type of character- he acts, and looks, the part effortlessly.

Darvill's character is a change from his prior time traveller character.  In Legends, he is sure of himself even when he has no idea what to do.  He chooses his companions carefully- from 2016, Star City (Arrow's setting) heroes and villains - each one with a unique ability that all together, work beautifully together, without losing their own core quality and character.

Another favorite character, Doctor Stein, played by Victor Garber (Titanic), has similar qualities of his Titanic character.  Stein is a brilliant physicist, the senior member of the team, and brings a sense of maturity to the team and the DC characters. During one of the episodes, he is referred to as "Dad", which is apprapo.  Normally watching younger actors act as the heroes, Garber is refreshing and brings a new perspective to the team that will surpass Avengers as the new Superhero team to watch.

During this premier season, we learn the background of each character in such a way that it's easy to keep everyone and their stories straight, unlike a lot of other shows where everything is mushed together. Legends keeps everything in separate little compartments, making it easy to follow everyone's story line and understand its relevancy to the plot.  The series also brings in some old familiar characters in a new way- remember, the characters hail from Star City and it's not so unexpected when the crew returns to their roots.

Taking us from Hunter's 2166 to 2016, from where he assembles his crew, Hunter then travels to multiple timelines, trying to kill the immortal Savage.  Nonetheless, it seems like whatever the wan does damages the time line and they have to figure out a way to fix it.

Despite not having the typical rugged heroes as most of the other DC series and movies have, Legends of Tomorrow is my favorite DC series to date.  It's not just about one main character and their interactions, it's about eight characters working together - most of the time- and their storylines and the one common goal- to eliminate Vandal Savage forever.  During the season, it's clear that there are many two- parters, without labeling them as such.  Each episode has a flow to it; you need to pay attention to the details, the show keeps building upon them, but the writing and action never gets boring.  You learn more about each character as the season  progresses and each character has about the same amount of viewing time, highlighting that no one character is more important than another.  It's clearly a team effort.  If Season 2 sticks to this type of writing and acting, there will be many more seasons of Legends to come.

The Legends of Tomorrow Blu-ray is encoded in 1080p AVC and the sound (DTS-HD Master Audio 5.1) is amazing.  I love watching a show and being able to hear all of the dialog without the special effects drowning them out. The colors are bright and vibrant and look much better than the initial broadcast release.

Bonus features include the 2015 Comic-Con Panel, Gag Reel, how the Waverider (Time Machine) came to be and how it was designed, as well as time traveling with the cast in different eras.  I think the best of the bonus features was watching the Waverider come to life.  The only negative was the Blu-ray didn't come with schematics to build our own!

I give this an A- only because it is reminiscent of some other plot lines. Casting one of my favorite time traveller's as this Time Master, along with the obvious chemistry of all the characters, was brilliant and earns this show 5 stars.