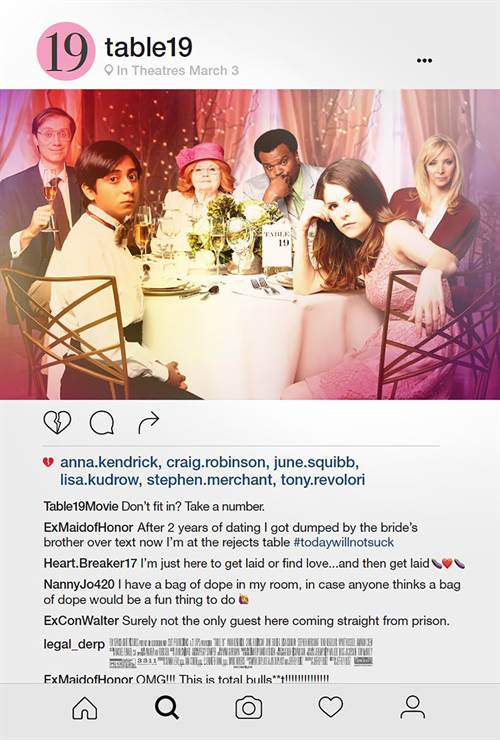 Ex-maid of honor Eloise (Anna Kendrick) - having been relieved of her duties after being unceremoniously dumped by the best man via text - decides to hold her head up high and attend her oldest friend's wedding anyway. She finds herself seated at the 'random' table in the back of the ballroom with a disparate group of strangers, most of whom should have known to just send regrets (but not before sending something nice off the registry). As everyone's secrets are revealed, Eloise learns a thing or two from the denizens of Table 19. Friendships - and even a little romance - can happen under the most unlikely circumstances.

Download Table 19 in Digital HD/4K from the iTunes store. 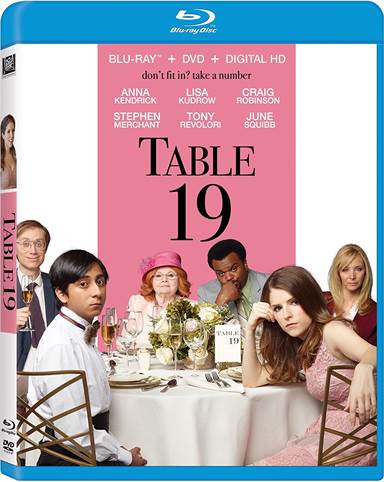 We've all been there… the dreaded wedding invitation arrives in the mail to the nuptials you aren't sure you should attend and don't know if you really even want to go.  Somehow you (or someone else does) convince yourself to RSVP yes and make a plan to head to the joyous occasion.  Up until the moment, you step into the reception you still have doubts and hem and haw if you should join the party or simply turn around and leave.  Once you gather the courage to step inside you realize quickly it was a mistake to come.  Yes, we've all been there…and now so has Eloise (Anna Kendrick; Pitch Perfect) in Table 19.

Eloise is bride, Francie's (Rya Meyers; How to get away with Murder), oldest friend and up until two months ago, she was the maid of honor.  Eloise also dated Francie's brother, Teddy (Wyatt Russell; 22Jump Street) but when they broke up 8 weeks before the wedding Eloise was replaced in the bridal party by Teddy's new girlfriend.  Unsure about if she should attend the wedding or not, Eloise ultimately shows up to find she has been relegated to table 19 or as Francie's mother put it…" the table of random guests who should have known better to than to accept but not before sending a nice gift off the registry"

Her tablemates include Francie's former nanny, Jo (June Squibb, About Schmidt), Bina (Lisa Kudrow, Friends) and Jerry (Craig Robinson; The Office) Kepp, cousin Walter (Stephen Merchant; The Office) and awkward teenager Renzo (Tony Revolori; Dope) -  all of whom have their own "issues".  This ragtag group of strangers form a strange bond and helps each of them work through some of what is ailing them. By the end of the evening, Eloise and Bina and Jerry have resolved their issues, Renzo and Walter are on their way to conquering their social awkwardness and Jo has made peace with herself.

Kendrick is well suited to this role.  She places the victim well but one who has an inner strength that comes out when the time is right.  I really like her in anything she is in and this film is no exception.  Kudrow, Revolori, Merchant, and Robinson are great back up for her and play their characters nicely.  Squibb, like Kendrick, seems outwardly meek but the façade covers up the tiger ready to strike underneath.  Russell is kind of dopey and I didn't really see the chemistry between him and Kendrick.

The Blu-ray is presented in 1080p high definition video with a widescreen aspect ratio of 239:1.  The picture quality is very good and the colors are robust especially the outdoor, wooded area moments.  The DTS-HD Master Audio 5.1 is fine but helps to accentuate the excellent ‘80's soundtrack, which is one of the better elements of the movie.  The Blu-ray offers minimal extras including eight minutes of deleted scenes, a photo gallery and 3 short promotional featurettes: Table of Rejects, Head of the Table and Table for Six. Each featurette runs about two minutes long and, while cute, don't offer much insight into the film or the making of it.

Categorized under comedy/drama, I found it to be more of the latter with little of the former thrown in.  However, taking it for what it is, the film is a homage to the somewhat socially awkward or periphery people that attend any catered party.  It's also a heartwarming tale of how five strangers can change someone's life in the course of mere hours.  Unfortunately, it doesn't go far enough and only mildly toughs at the audience's heartstrings.