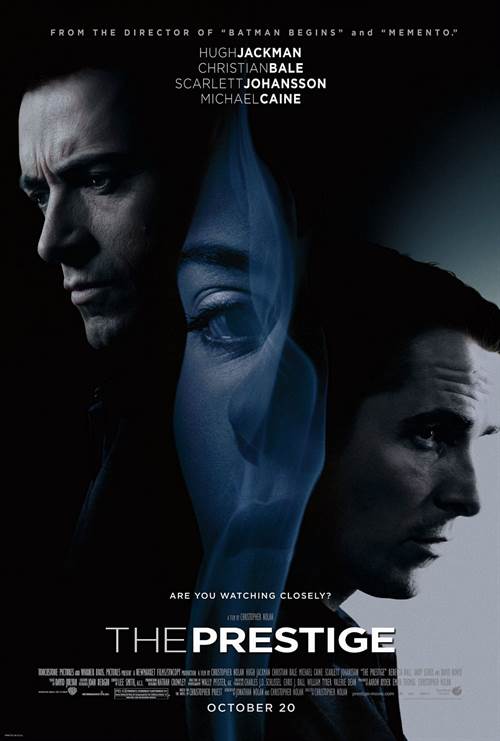 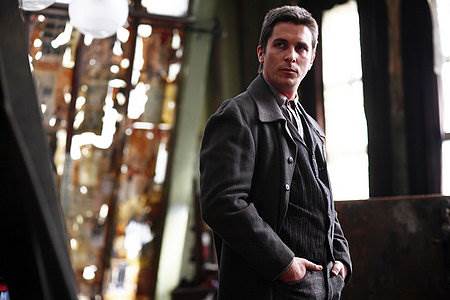 Stream The Prestige in Digital HD/4K from the AppleTV store.

The Prestige images are © Touchstone Pictures. All Rights Reserved. 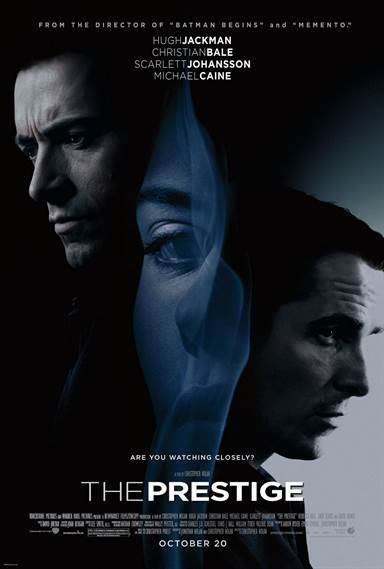 The name comes from the three parts of a magician's tick: the Pledge (you are shown something ordinary: a coin), the Turn (wherein something extraordinary happens--the coin vanishes), and the Prestige (the coin comes back behind your ear). In this period piece two stage magicians with a serious hate-on for each other duel over a series of years to upstage, ruin, or kill each other. This isn't rivalry--it's obsession.

With Christian Bale and Hugh Jackman cast as the rivals it's a heavy hitting cast. However, David Bowie cast picture-perfect as Nicolai Tesla steals the show. He makes his actor-ly rivals ... disappear.

Movies about magic need to do two things:
1. They need to take us behind the scenes.
2. They can't ruin the illusion.

As the movie says, a trick explained becomes mundane--uninteresting. So this is a fine line to walk. Ultimately The Prestige does some stuff that's jaw-dropping in terms of what you'd expect but it's Hollywood so I don't think it has to play fair--and for my money, it plays fair enough. You see how some of the tricks are done: some are clever. Some are gruesome. There's a trick they'll never sufficiently explain (and, as I said, that's okay). The story is told out of order--misdirection? You can decide.

There are some reveals throughout the movie that are well (and subtly telegraphed--subtle enough that they may not generate an "oh yeah!?" moment, well enough that when the two magicians watch a famous Chinese magician getting into a carriage and comment on his sacrifice in pretending in public to always be a cripple that we can see later on at least one of them knew what he was talking about).

If the movie has a weakness it's that Michael Caine is the most likable guy in the whole movie ... by far. I mean the two stage guys do have some elements of sympathy to them but if you do step back just a bit it's Jerk and Jerkier. This does not really endear me to the show in the way I'd have preferred.

So, yeah: The Prestige. Nasty enough to be good. A little too nasty to be great!