Dom Cobb (Leonardo DiCaprio) is a skilled thief, the best in the dangerous art of extraction: stealing valuable secrets from deep within the subconscious during the dream state when the mind is at its most vulnerable. Cobb's rare ability has made him a coveted player in this treacherous new world of corporate espionage, but it has also made him an international fugitive and cost him everything he has ever loved. Now Cobb is being offered a chance at redemption. One last job could give him his life back but only if he can accomplish the impossible--inception. Instead of the perfect heist, Cobb and his team of specialists have to pull off the reverse; their task is not to steal an idea but to plant one. If they succeed, it could be the perfect crime. But no amount of careful planning or expertise can prepare the team for the dangerous enemy that seems to predict their every move. An enemy that only Cobb could have seen coming.


Christopher Nolan Explains the Ending of Inception  6/5/2015 11:25 AM EDT
After 5 years, Christopher Nolan has decided to explain the ending to his hit film, "Inception".The director was speaking at the Princeton Commencement Ceremony earlier this week, and discussed the final scene, which, he says, always prompts the most questions.Nolan said,  "The way the end of that film worked, Leonardo DiCaprio's character, Cobb - he was off with his kids, he was in his own subjec...  More>> 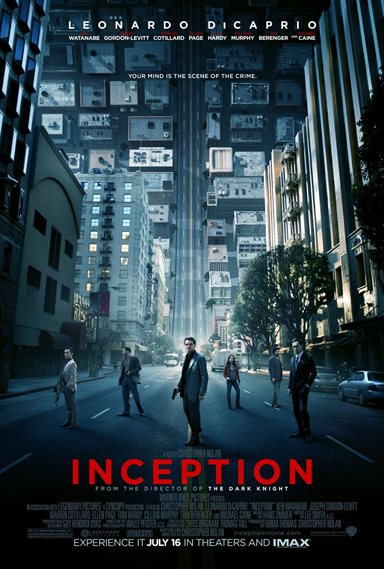 I did not intend to write a review for Inception.  I didn't want to.  If I plan on writing about a film, I take my notebook and write my notes by glow of the silver screen.  However, when I entered the midnight showing, I went empty handed.  I just wanted to sit back and enjoy the ride.  The lights dimmed; the film played; the curtain closed and something was planted in my head that has since festered and grown, taking over my dreams and my waking mind.  I was compelled to write on what I saw and experienced.  I sit here now, needing to share what I experienced, needing to tell as many as I can to run and have the same experience I did.  A film has not haunted me so much in quite a while.  It is the second of Nolan's films to make me question reality and have me chattering like a gibbon as I left the theater - Memento was the first.  They both messed with my head.  Inception is so well tuned, so well structured, the world it creates is complete and nearly perfect.  I not only understood, but I could easily manipulate the concepts it showed me so that I could see them every day around me.  This is what film is about.

At some undetermined time in the future (or maybe happening now in the present right under our noses) people are able to jack into other's subconscious and invade their dreams.  Dom Cobb (Leonardo DiCaprio) is the best at doing this and at finding the secrets hidden within those dreams.  He is hired by Saito (Ken Watanabe) to place an idea into his business rival's, Robert Fischer (Cillian Murphy), mind.  The request is impossible, the stakes, high, but Cobb needs to do it to gain access back into the United States in order to see his children again. A heist. One last job.  So, Cobb puts together a team of people to help him accomplish this task.  Ariadne (Ellen Page) is the architect; Yusuf (Dileep Rao) specializes in sleeping potions; Eames (Tom Hardy - stealing every scene he is in) has connections and munitions and Arthur (Joseph Gordon-Levitt) is Cobb's right hand man.  However, what none of them realize is that Cobb has a demon in his head in the form of his ex-wife, Mal (Marion Cotillard) that may materialize and wreak havoc while they are working.

The first person that must be praised is writer/director Christopher Nolan.  He has proven himself time and again to be the best director working today.  Is there any other director whose track record is so clean?  He makes films that are great for film geeks and casual filmgoers alike.  The critics love him with great reviews and the audiences love him with great box-office.  Besides the misstep that is Insomnia, I am hard pressed to think of anyone else who is so prolific and still so successful.  Some will say Tarantino but I would argue that Nolan has broader appeal.  I really don't know why more isn't being said and written about him.  He is a master storyteller.  No one else would have been able to cram so much information, at such breakneck speed, into two and a half hours without confusing me, and keep me on the edge of my seat.  Each piece of information is given at such a time that it either connects to what happened not so long ago, or so that we can use it to unlock the mystery that is about to come.  Other directors would have had pity on the "incompetence" of the audience; they would have watered down the plot to help us understand all the information.  Nolan drops us in the middle of a story and trusts us to keep up.  He doesn't bother with details that would weigh down the exposition (How can they jack into other people's dreams?, Who discovered it?, How does it work?) but instead offers it up for us to buy into if we are to follow him.

The editing is the second thing that must be praised.  The editing room is the final place that a director "writes", and as such Nolan's cutter, Lee Smith, (the one he's been working with since Batman Begins) is a genius.  For thirty to forty-five minutes in the second act of this film there are between four and six different storylines that are going on simultaneously and interrelate with each other.  The deft work done here is like juggling chainsaws.  If one of the storylines is botched and left behind, the whole movie is ruined.  And someone may lose a limb.  Added to that is the unbelievable score that Hans Zimmer, three-time Nolan collaborator, produces.  It is as unrelenting as the editing.  Looking back, I don't recall more then five minutes tops that did not have music behind it, pushing it forward, raising the tension.  There are a few spots in the film where I wished the movie would have slowed down some in order to let us feel the weight of an issue or a decision, and therefore I feel it lost something special in those moments.  However, on the whole, it is a dizzying display of expert editing.

DiCaprio does better here then he has done in quite a while, perhaps because he's not butchering some accent.  His guilt ridden scientist is very similar in tone to the guilt ridden cop he played in Shutter Island.  He is perfect in this role.  After discovering Tom Hardy in 2008's Bronson, I have found every role he's been in mesmerizing.  I'm glad he's going to be getting a chance soon to be a leading man, I just wish it wasn't as Mad Max.  Joseph Gordon-Levitt keeps choosing amazing material to be in, although I do wish the costume crew didn't always place him in the same dapper-looking clothes – shirt and tie with a cardigan again?  Switch it up a bit, huh?  And Marion Cotillard is an unrelenting force here.  The inside joke of having the music that wakes everyone up be Edith Piaf (Cotillard's Oscar winning role) was, I feel, inspired.  Through it all, nothing was regretted by these dreamweavers.

Finally I want to discuss a scene that was in the trailer – guys floating around a hotel hallway.  For some of it, I am still confused as to how they did it.  There are two segments to the scene.  The first is the fight, a fight that goes from floor to wall to ceiling to wall to floor with such ease and fluidity that even Fred Astaire, in all his dancing glory, couldn't have dreamed that film would have come this far.  That was incredible and I can't even imagine how the fight choreographer wrapped his brain around the logistics of bringing that all together.  The second is the zero gravity portion, long profound stretches of time where lots of people are suspended in zero gravity.  That's where I get confused.  I suppose it could be CG, erase the wires that the actors are hanging from, however it appeared to me to be more of what they did for the Apollo 13 film in NASA's KC-135 reduced gravity aircraft.  But how would they have been able to build an entire hotel hallway, room and elevator into one of those aircrafts?  It cooks my noodle, but I love it for doing so.

There are a couple of places where the visuals don't quite work, where the CG lets the filmmakers down.  There is a bit more of The Matrix (people being jacked in, not knowing which is the real reality, heck they even had a hot girl that was a complete fabrication of someone's imagination) and of Vanilla Sky here then I would have liked to see.  And though the ideas may not be completely original, the execution is.  How you react to the ending and your interpretation of the entire film is more a reflection of your personality and your outlook on life.  It's awesome for a piece of art to mean so many different things to so many different people.  Nolan has given us yet another a film that we will be watching for decades to come.