Home / Reviews / Once Upon A Time In Hollywood

The pairing of DiCaprio and Pitt is a dream acting team that only Tarantino could have pulled off this well. 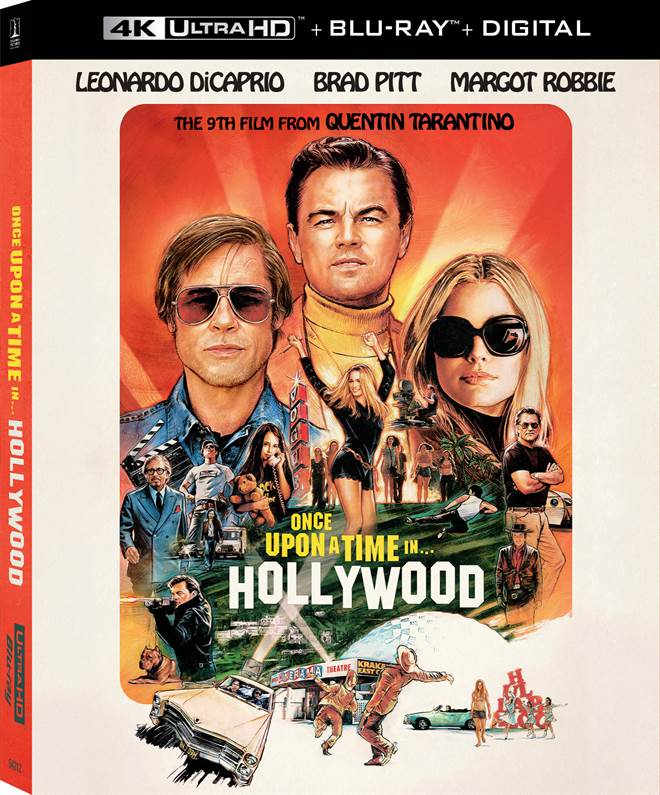 Once upon a time…a brash 29-year-old writer-director showed up at the Cannes Film Festival with a movie he called Reservoir Dogs. It was a unique and bloody twist on a ‘post crime caper film' that blasted its way onto the screen, became the must-see movie of the year propelling Quentin Tarantino into the unique category of ‘mega-celebrity director'.

In "Once Upon a Time", the now 59-year-old filmmaker brings us his most personal film to date, a love letter to the Hollywood he cherishes, but was not old enough to ever experience. It's rather like seeing what's really inside Marsellus's briefcase.

It's fun to watch Tarantino build his private vision of Hollywood in 1969 complete with all the images, clothing, billboards, and dialogue he's gleaned from all the films he loves from that period of the time. While the story leisurely and beautifully moves along at its own pace, what becomes fascinating is how he unfolds the tale of his two main characters, fading golden boys who are confronting their own irrelevance. It makes one wonder if Tarantino himself isn't also facing that same identity crisis.

It's the end of the '60s and things in Hollywood are changing faster than fading Western TV star Rick Dalton (Leonardo DiCaprio) and his longtime stunt double Cliff Booth (Brad Pitt), are able to understand. They are trying their best to make their way around an industry and town they don't recognize anymore.

Rick's diminishing celebrity is forcing him to contemplate the unimaginable act of going to Rome to star in Westerns, while Cliff, who hides a violent streak under the bright Hawaiian shirts he wears, is trying to just hang on.

They are surrounded by a host of successful Hollywood celebrities, from Steve McQueen to Roman Polanski, who just moved in next door with his new bride Sharron Tate (Margot Robbie), that makes their positions in the industry all the more depressing. This is an odyssey into the film industry that features a large and talented ensemble cast who fill out multiple storylines that pay tribute to the final moments of what Tarantino sees as Hollywood's golden age

The pairing of DiCaprio and Pitt is a dream acting team that only Tarantino could have pulled off this well. He relishes in both the acting moments of the film and the realistic moments, giving equal weight to each actor, and maturely examines the bond the two friends have created.

The 4K Combo pack is presented in 2160p resolution with a 2.39:1 aspect ratio.  The details are sharp and clean and the video shows no signs of artifacting.  The bright California sunshine of 1969 illuminates the screen and even the deeper tones aren't muddy.  The DTS-HD Master Audio 7.1 is stunning and robust with the dialogue sitting comfortably in the center channel leaving the sound effects to the surround sound speakers.

The 4K disc offers 7 additional scenes as the only extra, however, the Blu-ray disc houses the other extras which includes: Quentin Tarantino's Love Letter to Hollywood, Bob Richardson – For The Love of the Film, Shop Talk – The Cars of 1969, Restoring Hollywood – The Production Design of Once Upon a Time… in Hollywood  and The Fashion of 1969.

The film itself is spectacularly ambitious, touchingly nostalgic, engrossing, and hits you with a batch of surprises. It's definitely a Tarantino film, and a good one.

My take… At almost 3 hours long, watching "Once Upon a Time in Hollywood" seems like watching a short film. It will suck you in and leave you wanting more.

Grade: A+ "Once Upon a Time in Hollywood" is Rated R for language throughout, some strong graphic violence, drug use, and sexual references. Running Time: 2hrs 45min

For more information about Once Upon A Time In Hollywood visit the FlickDirect Movie Database. This release has been provided to FlickDirect for review purposes. For more reviews by Alyn Darnay please click here.

Once Upon A Time In Hollywood images are © Columbia Pictures. All Rights Reserved.

Read More Once Upon A Time In Hollywood Reviews

Allison Rose
DiCaprio offers a master class in how to act in a film in order to win an Oscar and the rest of the cast support him nicely.
Full Review | Grade: B