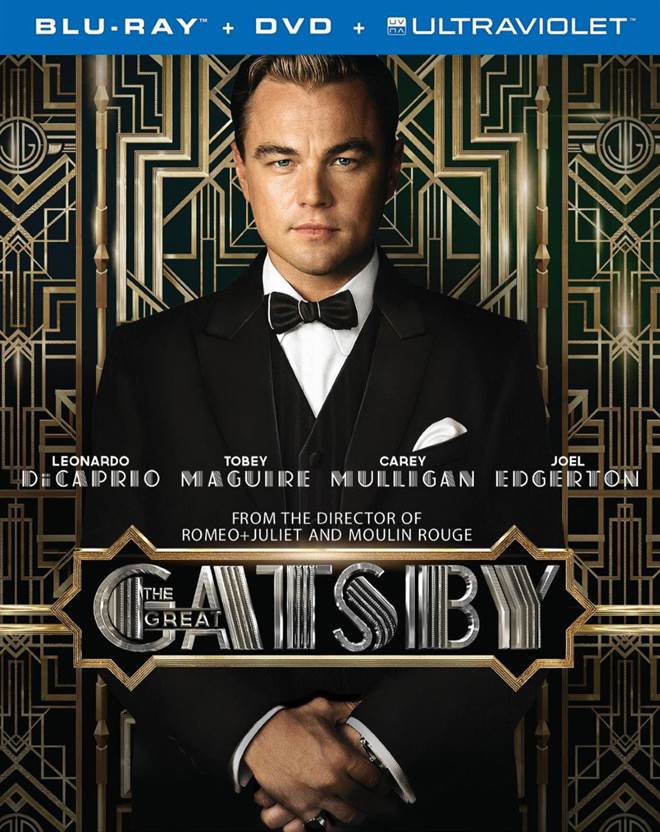 Purchase   DVD/Blu-ray/4K UHD
There's no shortness of irony swirling around Baz Luhrmann's The Great Gatsby, a slick but shallow retelling of F. Scott Fitzgerald's 1925 novel of the same name. From Strictly Ballroom to Romeo + Juliet, Moulin Rouge! to Australia, the famously ritzy, operatic visionary is known for elevating, even celebrating style over substance. Subtlety be damned. And yet his command of rhythm -- visual, musical or narrative -- is often exhilarating, divisive and uneven as each film has been. Here, though, Luhrmann crafts a debilitatingly decadent drama crippled by filmmaking excess... based on a cautionary tale about the dangers of decadence and excess. Fitzgerald's novel is much more, mind you; something that can't be said of Luhrmann and co-writer Craig Pearce's loud, gaudy adaptation, which doesn't offer much of any cause or consequence for ninety grotesque minutes. Until, that is, it finally discovers a part of itself in its dying third act breaths.

Summer, 1922. Veteran and Yale graduate Nick Carraway (Tobey Maguire) moves into a small house on Long Island. There he learns his reclusive neighbor is none other than mysterious millionaire Jay Gatsby (Leonardo DiCaprio), seldom seen entrepreneur who hosts an endless string of lavish parties; headline-making soirées that attract everyone from Hollywood power players to sports stars, businessmen, gangsters and an assortment of other colorful characters. Gatsby, though, takes a particular interest in Nick, stepping out of the shadows of his mansion to ask a single favor of his new neighbor. Nick, you see, is cousin to a wealthy woman named Daisy Buchanan (Carey Mulligan), who lives across the lake with her hot-tempered husband Tom (Joel Edgerton). And Gatsby, as it turns out, has been in love with Daisy for a very long time. But when Gatsby asks Nick to arrange a secret rendezvous for the would-be lovers, it sets off a series of events that involve disastrous decisions and (not so) shocking revelations.

Fitzgerald was no stranger to wealth, prosperity or the social extravagance of the 1920s. And yet his "Gatsby" is as much an indictment of the era and its indulgences as it is a dissection of the manner in which class and culture structures begin -- and continue -- to crumble wherever money, art and celebrity collide. The novel, though largely dismissed in Fitzgerald's lifetime, remains a scathing commentary on the fabled American Dream, which, to this day, continues to make promises that can't possibly be kept. It's an impossible ideal at best, a shared delusion at worst, arguably making Fitzgerald's "Gatsby" as relevant in 2013 as it was in 1925.

So how is it that Luhrmann's Gatsby rings so hollow? How is it that an adaptation arriving in the midst of another boom-crisis-boom-crisis economic cycle has so painfully little to say to a modern audience? Why does The Great Gatsby grin and grimace from start to finish as if its filmmakers didn't understand the point of Fitzgerald's book in the least? Here, Nick and his money-grubbing compatriots are superficial, altogether alienating caricatures. Gatsby, Daisy, Tom, George (Jason Clarke), Myrtle (Isla Fisher), Jordan (Elizabeth Debicki)... brash, one-dimensional exclamation points whose wide eyes, grand gestures, laughably exaggerated performances and simultaneously stiff period delivery are baffling. Who Framed Roger Rabbit was less cartoony than Gatsby. No hyperbole necessary.

More troubling is Luhrmann and Pearce's hyperactive vision and sledgehammer script, which utterly fail to tie decadence to decay, connect the '20s to the 21st century (the film's modern music is a transparent trick that leads nowhere), or convey the intricacies of a fascinating period in American history rife with opportunity and ruthlessness, opulence and cruelty. The director's Roaring '20s are more rowdy than roaring, and lack texture and truth; his actors proceed as if they've literally been snorting copious amounts of cocaine between takes, and suffer the limitations such feverish intensity and spastic energy bring. Even if you've never cracked a copy of "The Great Gatsby" -- fewer and fewer have -- it's all too obvious there's a lot of noise to the film but nothing that might make it quintessential or meaningful.

If there's any respite from the dizzying recklessness that dominates the film it's Luhrmann and Pearce's third act, which offers a glimpse into the Gatsby that could have been. When Tom begins to poke and prod Gatsby -- in view of Daisy, Nick and Jordan no less -- Edgerton and DiCaprio step onto the stage of an entirely different movie. One that's still grossly theatrical, but far more compelling. As tables turn, tensions rise and houses of cards tumble, Tom, Gatsby and Daisy become considerably more interesting (despite their prevailing narcissism), while Edgerton, DiCaprio and Mulligan's performances suddenly become considerably more bearable (despite their prevailing hysterics). It's too little, too late, sadly, but the dark turn suits the film better than the flights of frenzy that render the first two acts a waste of Luhrmann's talents and Fitzgerald's subversive novel. Hollywood has yet to do right by "Gatsby." And it's probably safe to say they never will.

On Blu-ray this week, Warner's 1080p/AVC-encoded video transfer is as dazzling and extravagant as its cinematography, with bountiful colors and exacting detail. Skintones are overly lit and prone to pink hues, and sometimes take on a sickly, flushed appearance (Gatsby's initial reunion with Daisy at Nick's house is particularly problematic). But similarly harsh lighting and oversaturation frequented the film's theatrical presentation, making this a matter of intention rather than an issue of the encode itself. Whether Craig Armstrong's blend-of-the-centuries fusion score or the film's eclectic hip hop soundtrack works for or against The Great Gatsby is debatable. Whether it works for or against Warner's DTS-HD Master Audio 5.1 surround track is not. With each beat, blare and snare roll, Luhrmann and Armstrong's musical canvas is full of punch, power and presence, with just enough playfulness and flare to make its command of the soundstage well deserved.

The Great Gatsby is too much flash and way too much fizzle. It isn't a matter of style over substance either. It's a matter of style without substance. The film is too detached from Fitzgerald's novel, too far removed from reality, and too disconnected from the human or historic elements that might offer film fans a foothold or anchor point. Instead, DiCaprio and company are amped up to the point of irritation, the script is cranked up to deafening levels, and the splashy visuals and blaring music undermine everything pulsing beneath the surface. The same can't be said of Warner's Blu-ray release, though. With an excellent video transfer, enthralling DTS-HD Master Audio 5.1 surround track and a decent selection of behind-the-scenes bonus content, The Great Gatsby excels in high definition. It's just a shame the film only excels in excess.

For more information about The Great Gatsby visit the FlickDirect Movie Database. This release has been provided to FlickDirect for review purposes. For more reviews by Chris Rebholz please click here.

John Delia
The Great Gatsby Is A film version of a pop-up book with a lot of cardboard characters.
Full Review | Grade: D