Younger kids (like way younger kids) will probably get a kick out of Free Birds, but for anyone past the tot stage, this film will seem old, tired and derivative. 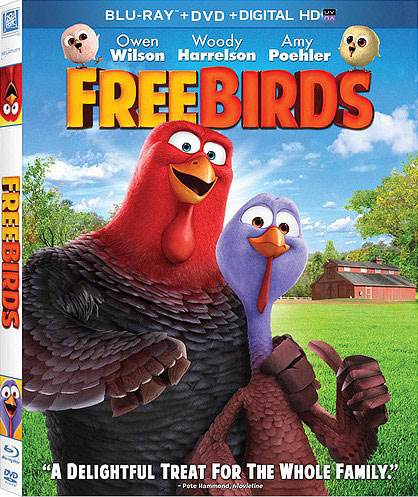 Purchase   DVD/Blu-ray/4K UHD
It's probably a good thing that the creative staff behind Free Birds decided not to go with the film's original title, Turkeys, a name which more or less would have invited snarky critical commentary. Free Birds is indeed a turkey, a kind of overly plumped and stuffed entertainment that is flightless and badly proportioned. Summing up Free Birds' general conceit as "time traveling turkeys" is probably funnier than anything actually in the film itself. Alas, there's little smartness in Free Birds, a film that dances precariously around a number of sensitive issues, including the pilgrims' interactions with Native Americans and the tradition of decimating too many turkeys to count every year in preparations for the Thanksgiving feast, without any consistent tone or even the courage to actually address these subjects as anything other than fodder for not very funny jokes. The film is bright, colorful and has a couple of amusing bits, but it's likely to put adults to sleep faster than an overdose of Tryptophan.

Would you like some idea of just how tired and rote much of Free Birds really is? Simply remove the few elements which are at least minimally "new" about this film and deal in generalities, and you'll quickly come to realize how much of this film you've seen before. We have a kind of nerdy outcast hero who becomes swept up into a larger than life adventure, bonding with an unlikely partner and becoming romantically involved with an equally unlikely female in the process. Now, add in the bird element, and that pretty much leaves the Thanksgiving angle as the one putative new element, at least as a primary plot point.

Reggie (Owen Wilson) is a gangly blue-faced turkey who is the only denizen of his farm flock who has figured out what the farmer really does with those of his kind around Thanksgiving time each year. Unfortunately, Reggie's warnings go completely unheeded and Reggie is an outcast due to being such a perceived alarmist. That all changes one day when the flock elder finally agrees that Reggie has been right all along, but instead of congratulating the hapless turkey, they decide to make him the scapegoat of the day. That plan backfires when it turns out that the turkey selected that day is actually part of the annual Presidential pardon. Reggie is whisked off in Copter One, the new "pet" of the President's ADD daughter.

Reggie quickly adjusts to his new life at Camp David, learning how to order in pizzas while becoming addicted to telenovelas on the Spanish language cable station. (Even this particular plot point, which admittedly could have been hilarious, is simply fodder for a few passing—and again none too funny—jokes.) One evening Reggie's viewing is interrupted by an interloper named Jake (Woody Harrelson), a much more muscular turkey than Reggie and one who claims to be a representative of The Turkey Liberation Front. Jake claims to have been contacted by The Great Turkey (Charles M. Schulz is no doubt turning over in his grave), with the express mission to get Reggie and utilize a nearby time machine to travel back to the first Thanksgiving, in an attempt to get turkeys permanently off the menu.

Reggie and Jake manage to infiltrate a top secret lair where they do indeed find the time machine. There is actually one fairly funny bit here, as the time machine creates a kind of vortex, madly spinning some workers who get caught in the maelstrom around and around, with a couple of them smacking up against a viewing window and making a squeaking noise as they beg for help. This is the general level of the humor throughout the film, though, and is more than countermanded by such dunderheaded ideas as having the great George Takei voice the artificial intelligence controlling the time machine (bearing the name of S.T.E.V.E.), but giving the actor absolutely nothing funny to say.

Once back in the 1600s, Reggie and Jake team up with a bunch of wild turkeys, which gives Reggie his chance for a romantic interest in the guise of Jenny (Amy Poehler), a sweet, no nonsense girl who turns out to be the daughter of the flock's (Native American looking) leader, Broadbeak (Keith David). Meanwhile, none other than Myles Standish (Colm Meaney) is painted as the Snidely Whiplash-esque villain of the piece, determined to round up as many turkeys as possible for what is ostensibly a starving Pilgrim population (despite the fact that they don't look particularly gaunt).

Free Birds ticks off the boxes pretty much as it might be expected to, including with a supposed time travel paradox that creeps in the film's final act, as well as a hint that a sequel will be in the works (my prediction is if it does indeed materialize, it will be a straight to video effort). The film is okay by most measures, but it's too derivative and lackluster to ever really take off. A turkey by any other name would still remain earthbound.

Free Birds is presented on Blu-ray courtesy of 20th Century Fox Home Entertainment with an AVC encoded 1080p transfer in 1.85:1. The high definition presentation is brilliantly crisp and well defined, with some great looking rendering of things like bird feathers. Similarly, Free Birds' lossless DTS-HD Master Audio 5.1 mix has a lot to recommend it, including some great immersive effects (the big scene when the time machine revs up has some fantastic surround activity) and good attention to ambient environmental details once the turkeys arrive back in Pilgrim times. Dialogue is very clearly and cleanly presented, and the film's boisterous score (by Dominic Lewis) is also very well represented here.

Special Features:Younger kids (like way younger kids) will probably get a kick out of Free Birds, but for anyone past the tot stage, this film will seem old, tired and derivative. It's bright and colorful and features an enjoyable cast of voice actors, but you've seen this all before. For those who did enjoy this film, the good news is that this Blu-ray features great looking video and sounding audio, and comes with some decent supplemental materials.
Cast:
Directed By:
MPAA Rating: PG

For more information about Free Birds visit the FlickDirect Movie Database. This release has been provided to FlickDirect for review purposes. For more reviews by Chris Rebholz please click here.