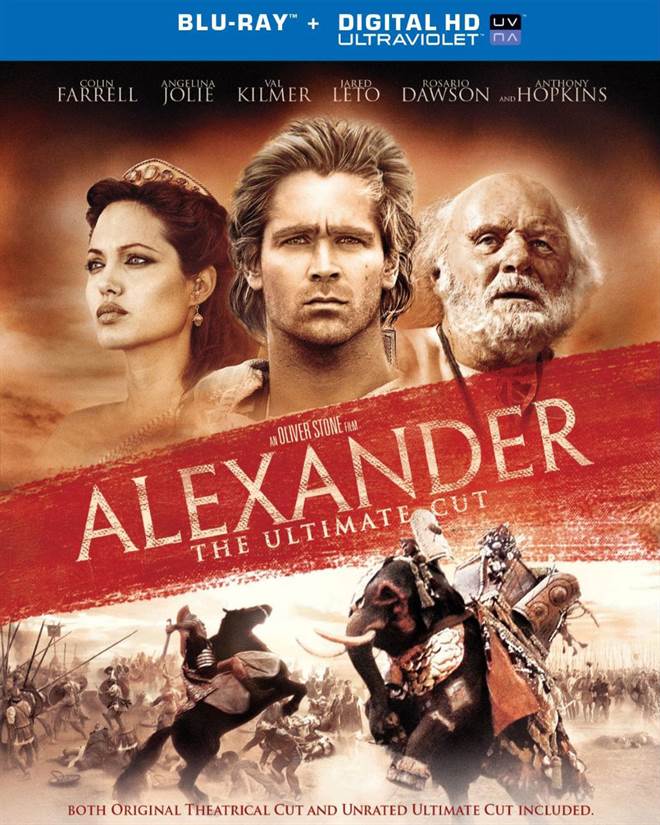 Purchase   DVD/Blu-ray/4K UHD
Historically, most of us are familiar with the name Alexander the Great.  Having succeeded his father to the throne at age twenty, he fought battles for power and control from his Greek kingdom of Macedonia throughout Persia,  Egypt and Asia, creating one of the largest empires in ancient times.

One of the latest movies about him, made by Oliver Stone in 2004 for a reported cost of $155 million and starred such powerhouses as Anthony Hopkins, Jared Leto, Angelina Jolie, Val Kilmer, Colin Farrell, Jonathan Rhys-Meyers, Christopher Plummer, and Rosario Dawson, has now been re-released on Blu-ray with an Ultimate version.  With the names and budget behind it, one would hope for much better than what Alexander, the Ultimate Cut, brings.  What it does bring is a tediously long 207-minute film that is difficult to sit through.

I can't say that I wasn't warned about the movie.  Everyone I tried to get to watch it with me, with the exception of my brother, flat out refused and said it was awful. I can now understand why they refused.  For a movie about a conqueror, there wasn't much conquering going on.  What conquering there was seemed pointless without a better script behind it.

The Blu-ray boxed set itself is quite nice, and gave hope that the movie was going to be something special.  It came complete with an envelope full of notes between Oliver Stone and some of the cast members, which I thought was a nice touch.  There was also a small bound book of pictures from the film–again, a great touch.  I should have known this was just pretty dressing to make up for a not so great movie.  The set comes complete with both the theatrical release and the Ultimate Cut.  I chose to watch the Ultimate cut—a decision I later regretted as, instead of 175 minutes of tedium, I subjected myself to 207 minutes.   There is an intermission midway through, and I thought that meant to switch disks–and found the brief time I watched the theatrical version much more palatable and easier to follow.  Unfortunately, as I had already started the Ultimate Cut, I put it back in the Blu-ray player.

I have no complaints regarding the film's cinematography—although you can tell that the scar on Alexander is makeup when viewing on my 16x9 1080p projector.  The scenery was one of the good things about the movie.  The acting itself was not even bad—it was just, to me at least, horribly written and edited together.  The movie continually had flashbacks and flash-forwards, making it even harder to follow a script that was poorly written.  20 years ago, 40 years ago, 7 years ago, etc.

Alexander was narrated by the great Anthony Hopkins.  The film begins with the death of Alexander (Colin Farrell) and then the jumping begins.  The scene shifts 40 years into the future with Anthony Hopkins as Ptolemy (now a Pharaoh) recalling his time on the battlefield with Alexander and historians recording his account of Alexander's life.  The film then jumps again to 45 years into the past with his account of history.  Enter Jared Leto's character, Hephaiston, talking with Alexander about the upcoming battle against the Persian Empire.  The sexual undertones between the two characters quickly lead you to believe they are more than just platonic friends.  Here again, the film jumps even further into the past to introduce Angelina Jolie as Alexander's mother, Olympias.

We witness her training young Alexander, through her pet snakes—yes, pet snakes—to compare people to snakes, teaching him that people can quickly turn on him.  Supposedly, according to the film, she is believed to be part sorceress who claims Alexander's true father is Zeus.  Val Kilmer is introduced as Alexander's father, King Phillip II, when he enters the room to try and rape his wife, in front of his son.  Are you feeling my frustration with the film yet?  The big battle scene in the opening scenes, has little going for it unless you are into blood, guts, and war cries.  There is not much leading up to the scene for one to actually care about anything happening except wondering why it is happening in the first place.  We learn that Aristotle (Christopher Plummer) was his teacher, and Hephaistion and Cassandra (Davies) his childhood friends.

Briefly, Rosario Dawson enters the film as Roxana, one of Alexander's wives.  Of course during that time we get to see him with his gay lover, so no big love story there and not really anything to care about.  Later, Roxana is accused of poisoning Hephaistion.

Admittedly, I fell asleep at least twice during the film as the "conquering" moves further and further East over a seven year period into Babylon and India,  and frankly had to stop watching it for a time just out of sheer amazement when there was a scene with an elephant crushing a man's skull–really???

The Blu-ray's quality came across beautifully on the screen.  It is presented in 5.1 DTS-HD Master Audio.   There are a lot of extras for film aficionados included on the Theatrical Cut, including a commentary by Oliver Stone and Robin Lane Fox, a look behind the scenes with Sean Stone via 3 Documenaties : Resureecting Alexander, Perfect is the Enemy of Good, and the Death of Alexander.

The extras, like the film itself are more than 3 hours long.  Sean Stone, Oliver Stone's son, filmed the extras.  Within the Ultimate commentary, Oliver Stone discusses the changes made to the film and within the theatrical version, there is a historian with Stone who discusses the details of Alexander's life.  Along those same lines is the documentary "The Real Alexander and the World He Made", which also delves more deeply into Alexander's history.  At the end of the film, we are told that much of what was written by Ptolemy was later destroyed.

Concerned I was being rather harsh in my review, I did take a look to see if the film was nominated for any awards.  I found that it was.  It was nominated for the 2005 Razzie awards for Worst director, Worst supporting actor–Val Kilmer, Worst Actor–Farrell, and Worst Screenplay.  Apparently, I am not alone in my opinion of the film.  I'd give it a grade of D–, as the cinematography was beautiful to look at.
Cast:
Directed By:
MPAA Rating: R

For more information about Alexander visit the FlickDirect Movie Database. This release has been provided to FlickDirect for review purposes. For more reviews by Michelle Koesten please click here.