Home / Reviews / The Penguins of Madagascar

The Penguins of Madagascar (2014) Blu-ray Review 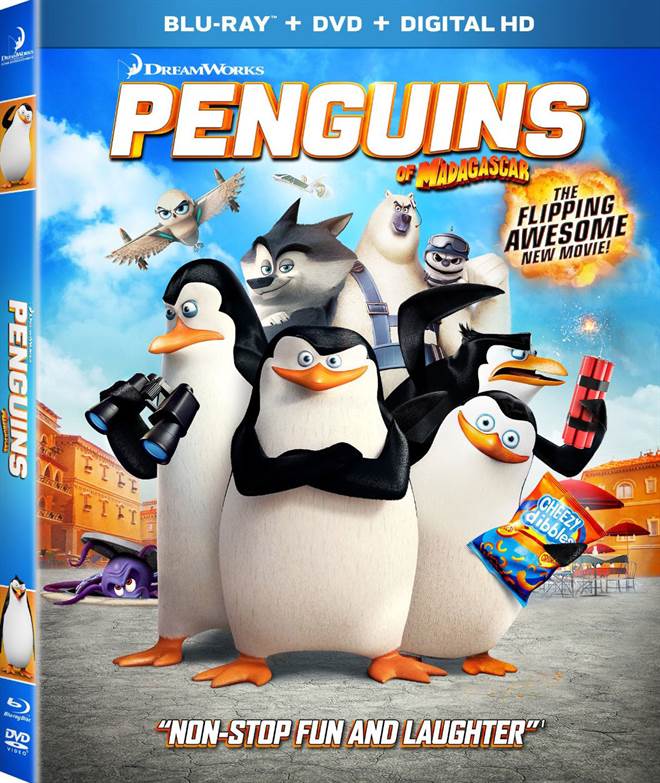 Purchase   DVD/Blu-ray/4K UHD
After three movies of playing bit characters in the background, the Penguins of Madagascar finally have gotten their starring roles.  The black and white flightless birds, that have always had about ten minutes of screen time, are now the main players of the hour and a half long The Penguins of Madagascar.  With their crazy strategic missions, they live life like no other penguins.  Riding the coattails of the popular television series, the movie will most likely do well at the box office despite a somewhat weak script.

In the new Madagascar movie, Skipper (Tom McGrath; Megamind, Monsters vs. Aliens), Kowolski (Chris Miller; Shrek, Monsters vs. Aliens), Rico (Conrad Vernon; Shrek, Bee Movie) and Private (Christopher Knights; Shrek, Megamind) find themselves the targets of a plot to rid the world of all the cute penguins.  The antagonist, Dave, played by John Malkovich (Transformers:Dark of The Moon, Warm Bodies), is a purple Octopus who used to be the star of the zoo until our beloved penguins showed up, stealing the spotlight.  Constantly being shoved in the background and transferred from place to place, Dave harbors a hatred that fuels his lust for revenge.  After creating a "Medusa serum", Dave kidnaps the penguins of the world in order to turn them into hideous monsters.

McGrath, Miller, Knights and Vernon are the same as always and are good as the team of highly tactical penguins we know and love.  Malkovich is great as Dave and plays the villain with his usual flare.  Benedict Cumberbatch (Sherlock, 12 Years a Slave) plays Classified, the leader of a secret organization called "the North Wind", set to save the penguins and bring Dave to justice.  Unfortunately, he sounds exactly like one of his other characters, Smaug the dragon from The Hobbit, which is a little distracting.

The Penguins of Madagascar Blu-ray is presented in 1.85:1 aspect ratio with amazing color depth and details. The picture is so vivid it appears almost to jump off the screen. As with the video the audio presentation of The Penguins of Madagascar is a real delight. Presented in DTS-HD Master Audio 7.1 lossless soundtrack, the soundtrack has a perfect mix, with clear dialog and crisp sound effects.

Aside from the usual Digital copy of the film, the Blu-ray contains a slew of special features. Unfortunately, they are geared towards children, their target audience, instead of having a few for adults, with the exception of the deleted scenes.

While the plot is nothing we haven't seen before, the penguins certainly make it fun with their outlandish schemes that somehow manage to run like clockwork.  The visuals are very good and full of vibrant colors that really shine on Blu-ray; they are sure to attract and hold the attention of younger audiences.  The purple octopus particularly stands out and the park scene at the end of the film is colorful and lively.

Usually by the time a franchise hits the fourth installment, it has run out of steam and, unfortunately, The Penguins of Madagascar isn't the exception.  It's a cute movie that has a few laughs for the adults and will probably be fun for its intended audience, but, overall, I wouldn't consider it one of the best-animated movies in recent history.

For more information about The Penguins of Madagascar visit the FlickDirect Movie Database. This release has been provided to FlickDirect for review purposes. For more reviews by Allison Rose please click here.

Allison Rose
Usually by the time a franchise hits the fourth installment it has run out of steam and unfortunately The Penguins of Madagascar isn’t the exception.
Full Review | Grade: B