For most of us, Alfred Hitchcock films have been viewed on cable television, VHS, or DVD.  Now with this release, one can truly enjoy the art created by one of the greatest directors this world has ever seen. 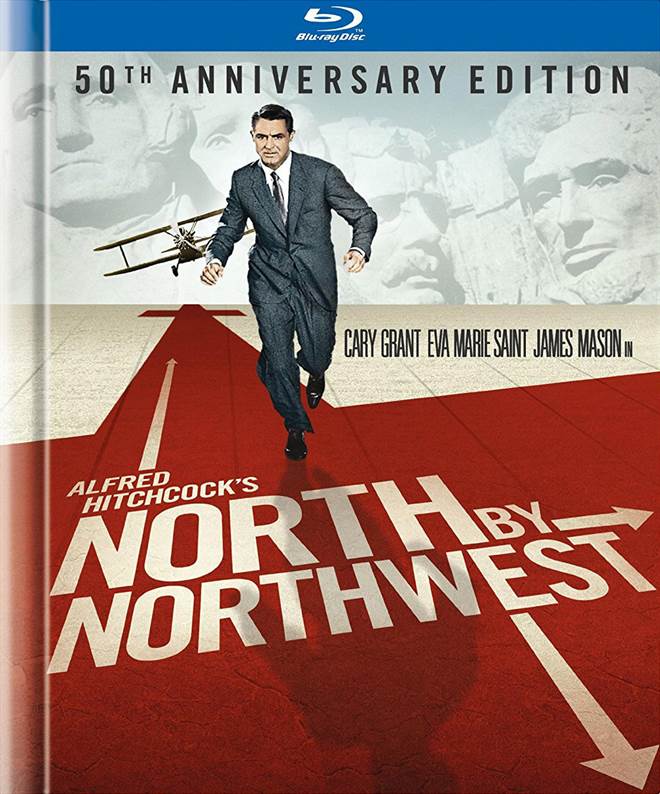 Purchase   DVD/Blu-ray/4K UHD
Can you believe that 50 years have already gone by since the release of Alfred Hitchcock's classic, North by Northwest?  It certainly has, and Warner Bros Home Entertainment is celebrating its golden anniversary with "a bang" by releasing the classic film on their Blu-ray-book series.
Self-assured Madison Avenue and Executive Roger Thornhill (Cary Grant) inadvertently get involved with international spies when they accidentally mistake him for someone else. His problems are compounded when he has been framed for murder. He winds up on a cross-country train trip with pretty Eve Kendall (Eva Marie Saint) who offers her help.
Arguably, one of Alfred Hitchcock's  and Cary Grant's best films, North by Northwest, was ahead of its time as a spy thriller; much like in the same vein, one might find a James Bond film or the zany True Lies, by James Cameron.  Once the action starts, it never lets up with Cary Grant visiting such places as the United Nations to the climatic battle on top of Mount Rushmore.
Encoding with the latest VC-1 video codec, North by Northwest is absolutely stunning. The film's original VistaVision print was scanned in at 8k resolution and does the job perfectly. The details of the original print shine through and make this film almost comparable to any film created in the past few years. The sound has also been upgraded to a superb Dolby True HD 5.1.  While Hitchcock never intended for the film to have such a dynamic range of sound, the tracks are split nicely and help add to the overall cohesion of the film.
Aside from this classic feature film getting it's fair due on the home theater market, the North By Northwest Blu-ray also contains a fair amount of behind the scenes features on the disc, including Destination Hitchcock: The Making of North by Northwest , Cary Grant: A Class Apart, and the films theatrical trailer.  Aside from the digital extra's, the Blu-ray also contains a 43-page digibooklet, with cast bios and behind the scenes photos.
For most of us, Alfred Hitchcock films have been viewed on cable television, VHS, or DVD.  Now with this release, one can truly enjoy the art created by one of the greatest directors this world has ever seen.
Cast:
Directed By:
MPAA Rating: NR

North by Northwest images are © MGM Studios. All Rights Reserved.

Allison Rose
With North By Northwest truly being one of Alfred Hitchcock’s best films, it was a pleasure to finally see it the way Hitchcock intended, on the big screen.
Full Review | Grade: A