Surrogates is a decent action film and a good try at a serious sci-fi movie. It doesn't move into the classic zone in any of its categories, but it is a great try for all of them. 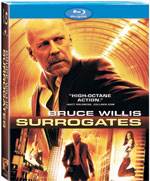 When I saw the trailer for Surrogates in the theater, I became interested.  It was a Bruce Willis sci-fi where people could wear artificial bodies that were their avatars throughout the day.  I wondered if it was thoughtful or just an action vehicle.  With Bruce Willis leading, I figured it would be okay because I liked I-Robot even though a spool of copper wire and a magnet was able to power Dallas with the electricity generated by Isaac Asimov spinning in his grave.

It turns out that Surrogates, based on a graphic novel of the same name, is a reasonably thoughtful science fiction.  It is set in an alternate modern-day where technology has given us full-spectrum artificial bodies to wear as we lay in bed.  These bodies look like idealized humans and can do everything depending on if they are an FBI super-agent model, from leaping small buildings to having weird electro-drug sex.  The movie makes an attempt to both get the tech right and gets the social impact.  The director and writers carefully studied modern-day artificial limbs and robots.

For one thing, no one can die.  When a massive car accident takes out people waiting in line at a restaurant, the police mark it as vandalism.  For another thing, you can be a fat guy and masquerade as a super-attractive woman.  It is like the experience of being online but in the flesh.  There is a political/quasi-religious movement of people who reject the idea, and then there is the specter of a new weapon that can kill a surrogate and fry the brain of the person driving it.

Then enter Bruce Willis as the FBI agent on the case.  The movie is a trim 89 minutes, and it turns out that even that might be a little too long.  The story takes careful pains to explain itself assuming it has lost the audience.  The action is good, although the director's commentary notes that what is possibly the best action scene in the movie was added late in the game because they felt they needed to punch it up. It doesn't go into the dark places it could -- imagine human weirdness without fear of death -- I think people might be doing stranger things than shocking themselves with electro-bongs even if their robots were pretty expensive.

The movie uses CGI to pretty everyone up and casts beautiful people, to begin with -- with lots of makeup.  The effect is fairly startling until Wills comes out of his room; he looks like a 20-year-old version of himself.  The movie has people using stereo-style headsets rather than plugging their brains into a box, which makes death less likely; but it would get wider adoption than someone trying to drill a hole in my skull.

Ultimately, the story is a bit of a flat note; it is moderately anti-technology which an easy play is.  The mystery isn't all that deep, and the story turns on an unlikely point that the FBI can monitor everyone all the time... something that is portrayed as maybe a good thing; but at least not the stunning invasion of privacy it turns out to be.  This is the stylistic counterpoint to Dark Knight's getting its underwear in a not over-using people's cell phones as a sonar system to catch a mass murderer...

I think the biggest problem is that the movie relies on Bruce Willis' charisma too much.  A major character element involves him and his wife being strained over (a) the loss of their son, and (b) her spending all her time in a gorgeous surrogate body and not wanting to unplug to be her less attractive self.  The movie shows this but does not in any way sell it.  In the beginning, the scene of Willis opening a door to show his son's still decked out but clearly vacant room reads like a movie note that said, "SHOW MAIN CHARACTER'S RELATION WITH SON".   Similarly, Willis' relationship with his wife feels sketchy.

The Blu-Ray cut is excellent in sound and video, although the movie isn't "big" enough to justify the extra cost if you're pinching pennies.  The extras are okay: good director's commentary, a making-of, and a show on real-life robots that were the studied for the piece.  They also go into how they did some of the effects.  It isn't a magnificent amount of material, but it isn't bad.

In the end, Surrogates is a decent action film and a good try at a serious sci-fi movie.  It doesn't move into the classic zone in any of its categories, but it is a great try for all of them.  Willis is a good star to hang the movie on, and wherever it falls short, it isn't insulting.  I debated whether to give this a B or a C and decided on the 'B' because while it is at the low end of the spectrum, for its short run-time, it kept me interested all the way through.

For more information about Surrogates visit the FlickDirect Movie Database. This release has been provided to FlickDirect for review purposes. For more reviews by Marco Chacon please click here.