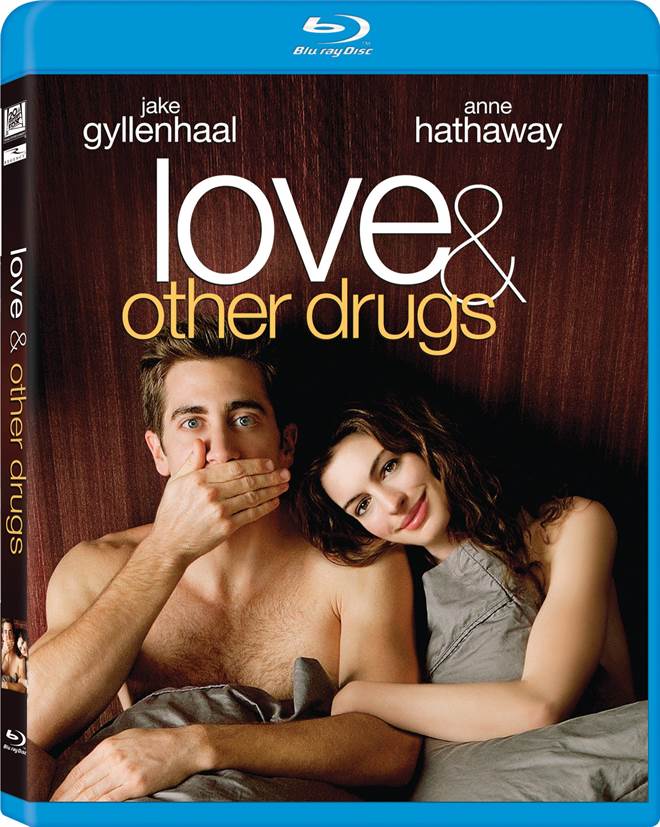 Purchase   DVD/Blu-ray/4K UHD
The film Love & Other Drugs came to theaters without much fanfare. Perhaps that was because the tone of the movie never quite found its groove. The movie stars Jake Gyllenhaal and Anne Hathaway as Jamie and Maggie; two people who are more than opposite but wind up having an intimate and torrid affair. The characters they play are nothing we haven't seen before. Hathaway's "Maggie" is the passionate free spirit who challenges Gyllenhaal's "Jamie" with her wild and unorthodox ways.

What kept the film from really catching on was the uneven plot. It was billed as a romantic comedy and for the first half it is exactly that. But a major plot development midway through the movie completely changes the tone of the film. From there the movie becomes a heavy melodrama trying to bring home a message of inspiration that it never quite delivers.

The film opens upon Jamie Randall (Gyllenhaal) working at an electronics retailer. Very quickly it is easy to see that he is someone who is highly motivated, talented, and a total "player". A short sequence of his family life shows us that he comes from a family of over achievers, him being the only one to try the least hard. His brother Josh offers to help him get a better paying job selling pharmaceuticals for a top drug firm. After an orientation and training period, Jaime is sent to Ohio to apprentice under Bruce (Oliver Platt) a middle aged traveling salesman desperate to get off the road and back home.

Jaime struggles early on in his attempts to pitch the newest anti-depressant on the market, Zoloft. He makes repeated pitches to one doctor, Stan (Hank Azaria), who has no interest in what Jaime has to say. An unexpected turn of events introduces Jaime to Maggie (Anne Hathaway), a free spirited, forthright woman who sees right through Jaime's ladies' man persona. Right from the start Jaime is clearly infatuated with her though he may not want to wish to admit it to himself. After some verbal foreplay turns into passionate love making both of them wind up in a whirlwind romance neither of them expected.

Things get somewhat hairy as Jaime sees the reality of Maggie's condition; she has Parkinson's disease which causes uncontrollable shakes and tremors throughout the afflicted person's body. As their relationship blossoms into more Jaime faces the reality that this isn't something that will go away and will only get worse over time. Soon his inability to accept this cause's major strife between the two of them and their relationship suffers because of it.

The film hit shelves on Blu-ray recently so for fans of the film who want to relive the highs and lows of their relationship, they now have the leisure to do so. The movie looks very sharp and you can really appreciate the quality of Blu-Ray when staring at the hypnotic beauty of Anne Hathaway. The sound quality while good, won't really grab you in any major way. In general, really good sound tends to have the best impact on movies with large action sequences or moving soundtracks. Along with a digital copy of the movie to watch on portable devices like laptops, there are a few extras along with the film; a few deleted scenes, an actor's discussion of the film, individual interviews with the actors about their characters, and the BD Live function powered by IMDB.com for in a behind-the-scenes look at the film.

While Love & Other Drugs does have enjoyable moments in it and there is something of a love story immersed within it, it just never hits the mark of the classic romance film.
Cast:
Directed By:
MPAA Rating: R

For more information about Love & Other Drugs visit the FlickDirect Movie Database. This release has been provided to FlickDirect for review purposes. For more reviews by Chris Rebholz please click here.

Chris Rebholz
When going to see a movie you have certain expectations. If a film is billed as a comedy than you expect to have a laugh filled experience. The same can be said for the other genres as well. Sometimes there are movies that try to break the mold they are cast in; Love & Other Drugs is just such a...
Full Review | Grade: C