Those dreams have finally come true for all fans, and it was well worth the wait. 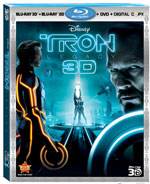 For years now, fans of the movie, Tron, have been literally screaming for a sequel to the 1980's hit film.  Finally, after many years of waiting (and not always patiently), news came out of a sequel in the works.  It was at the San Diego Comic-Con that footage was released for a possible Tron sequel. Fans went absolutely wild for it, and a movie was quickly put into the works.  It seemed like forever, but the film reached theaters in December 2010, and once again fans were transported to the world of the Grid.

The movie takes place roughly 30 years after the original ended; when it opens we see Kevin Flynn has become a father to a boy named Sam.  The opening scene shows Kevin telling a bedtime story to Sam about his adventures within the Grid.  Of course, Sam believes every word his father says and cannot wait for the day he can join him.  However, when his Dad leaves for the night, Sam is unaware that this will be the last time he will see him. Time leaps forward, and Sam is now a young man, leading a life of a nomad, never having any real attachments to anyone or anything.  His Father's company is now run by a Board of Trustees, and they have taken it in a different direction than Kevin had intended.

One night, Kevin's old friend, Alan (Bruce Boxleitner), comes to see Sam and tells him he had received a page from Kevin.  It originated from the old arcade Kevin used to run.  Sam goes by the arcade and discovers his Father's old workstation in the back room.  Once again, events repeat themselves as Sam is transported into the same virtual reality his Dad had been to.  This time around the world has changed drastically.  It resembles more a world that has fallen on dark times. There is evidence of this as Sam is forcefully recruited into the game grid.  Completely unaware of what is going on, Sam barely survives his first game battle against a foe by the name of Rinzler who displays unimaginable battle prowess.

After his fight with Rinzler, Sam is once again forced into another game battle - this time with newly designed light cycles.  Just when it looks as though he will not survive this fight, a new ally shows up and rescues Sam from the machinations of the evil Clu (Jeff Bridges).  His rescuer is a naïve young program named Quorra (Olivia Wilde) who reunites Sam with his Father who has been living and hiding inside this virtual world that he helped create.  Their happy reunion is short-lived as Kevin explains that Clu is his creation.  He originally intended to help create a utopian game world, but has now turned to more villainous ways.

Their only hope is to try and stop Clu from capturing Kevin and using his identity disc to infiltrate the physical world.  To give you any more detail would spoil the fun of the film but needless to say, there are tons of breathtaking visuals coinciding with a sad and yet poignant ending.  Today it comes to Blu-ray on a five-disc-set that is jam-packed with extras.  On disc one, there is the Blu-ray version of the film, a short film telling what happens after the end of the film; a Disney second screen which allows the viewer to utilize their iPad or computer as you watch the movie; a first look at a new animated series titled Tron: Uprising, the music video "Derezzed" by Daft Punk; a look at how the writer and filmmakers developed the story, and a look at the footage shown at Comic-Con. Special features also include:

This set also contains the 3D version of the film, which actually surpasses the theatrical release. During its theatrical run, some of the characters looked flat on the screen; however, those same scenes are now cleaned up on the home entertainment release.  Make no mistake about this disc, it is demo quality to show off your 3D-home entertainment system.

If Tron Legacy had you craving the original 1982 Tron film, again, you are in luck.  Disc 3 contains the original Tron film in all its Blu-ray glory and has never looked better (see the full review of Tron here).

When Tron first hit theaters, no one could have suspected the kind of impact or staying power it has had, nor did anyone think that it would one day have a sequel made developing on ideas presented in the first film.  Now that those dreams have finally come true for all fans, and it was well worth the wait.

One can only hope Tron 3 comes in the next couple of years to a theater near you.

For more information about Tron Legacy visit the FlickDirect Movie Database. This release has been provided to FlickDirect for review purposes. For more reviews by Chris Rebholz please click here.