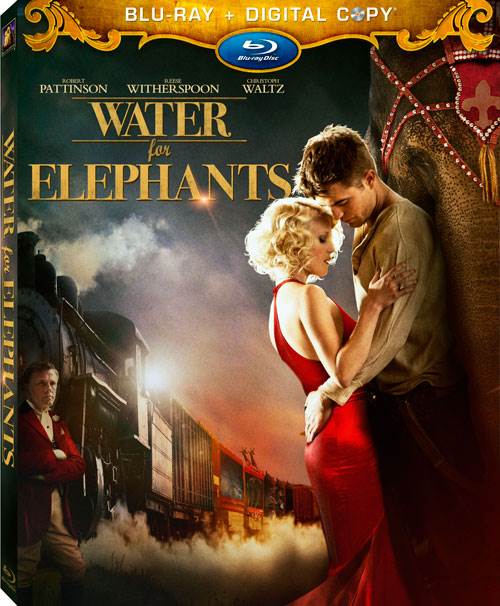 Purchase   DVD/Blu-ray/4K UHD
There's a great movie to be made about the history of the circus. Water for Elephants strives to be that film, but misses the mark. There is also an intriguing drama to be fashioned out of the rituals and customs of those who've lived their lives under the Big Top. There have always been great romances created out of star-crossed characters, each in need of what the other has to offer both emotionally and sexually, and even more intense storylines surrounding power-mad abusive showmen who use their failures as human beings as a way to abuse animals and humans alike. Unfortunately this film seems to be just shy of the bullseye.
What "it" actually is remains a mystery, an enigmatic and dull bit of filmmaking more faithful to the bestselling book it was based on than the tenets of audience entertainment. With our three leads there is no chemistry, no clear rooting interest, and no clear motive for their various and illogical actions. Instead, the Great Depression gets most of the blame, the universal hopelessness that came from it, leading attractive women to work under the instruction of a cruel ringmaster, a promising young veterinarian student to hop a freight train before completing his college studies, and animals and people to be whipped and demeaned for the sake of evoking tears from its audience.
We are introduced to our leading man Jacob Jankowski (Robert Pattinson, and Hal Holbrook bookending the film) when he's very old and ready to reminisce. Soon, it is 1931 and the Benzini Brothers' Most Spectacular Show on Earth is roaming around Northeast America looking for customers. It is run with an iron fist by suave psycho August (Christoph Waltz) and features his wife, the star attraction Marlena (Reese Witherspoon), but it is barely able to make ends meet. When Jacob accidentally stumbles onto their train, he becomes the circus' resident vet. His first order of business -- put down a lame horse. His second -- train a reluctant elephant named Rosie for its moment in the three ring spotlight. Of course after meeting Marlena he is instantly taken with her as she is with him. The difficulty here is understanding why they are so drawn to one another because there is simply no chemistry between them.
Water for Elephants is a good looking film attempting to be more. It features actors who don't resonate with one another or inspire each other, storylines that make little sense when thought about later, and supporting players who are introduced and then given no resolution. Since screenwriter Richard LaGravenese is more or less true to the source, fans will be more than happy. But anyone not wholly invested in or familiar with Sara Gruen's saga will be rather unimpressed. The obvious plot plays out just as you expect, and the main love triangle is so old fashioned that it fails to ignite any passion from the viewer unlike say The Notebook.
Of the cast, Pattinson shows little range or isn't worth watching beyond Twilight interest. While Waltz works overtime to make August both endearing and evil, the character comes across like a maniac, and Witherspoon is just eye and arm candy, only there to be the cause for all the hand-wringing and fist-fighting to come.
Now it has arrived on Blu-ray spread over 2 discs, the first containing a digital copy of the film for those who like their movies on the go. Disc 2 has the Blu-ray version of the film along with audio commentary from the director and writer, a look at the adaption of the script to the big screen and the visual effects of the film. There are a few docs as well starting with how the production team created a fictional big circus for the film, a history of the circus, features on Pattinson, Witherspoon, and Rosie the elephant and finally the theatrical trailer. With a lot of films it all comes down to chemistry, not only with the actors but from everyone involved. Unfortunately that just wasn't the case with this film.
Cast:
Directed By:
MPAA Rating: PG-13

For more information about Water for Elephants visit the FlickDirect Movie Database. This release has been provided to FlickDirect for review purposes. For more reviews by Chris Rebholz please click here.

Eric English
Water for Elephants stars Robert Pattinson and Reese Witherspoon as two people who find love amidst the Great Depression while working for a traveling circus. The movie is based on the acclaimed bestseller by Sara Gruen and directed by Francis Lawrence.Pattinson plays Jacob Jankowski, a veterinary s...
Full Review | Grade: C