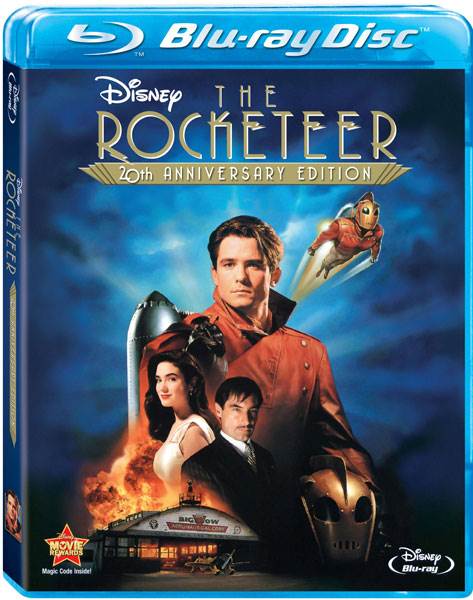 Purchase   DVD/Blu-ray/4K UHD
Coming out on Disney Blu-ray in honor of the 20th anniversary of the film is The Rocketeer.  Based on the graphic novel with the same name, The Rocketeer is set in Los Angeles, circa 1938.  The movie is directed by Joe Johnston (Captain America: The First Avenger), and is his second film as a director.  The movie follows test/stunt pilot Cliff (played by Bill Campbell) who is planning on racing in the National Air Speed Races using a plane built by Peevy (played by Alan Arkin).  Unfortunately he ends up testing the plane while flying over mobsters who are trying to elude two G-Men, and one of the mobsters ends up shooting Cliff's plane causing it to crash while landing, ending his goal of racing.  But it turns out that the mobsters had stolen an object of national importance and one of them ends up hiding it at the airport where Cliff and Peevy worked on the plane.  Cliff finds the object, which is actually a rocket backpack, and wants to use it to raise some money before turning it in. Peevy builds a helmet to go with it, and during a disaster shortly thereafter at the airfield, the Rocketeer is born.

The movie is very slow paced compared to modern films, and takes its' time developing the story and plot.  It's usually not a bad thing, but this movie suffers from a lack of caring about the main character.  Cliff gets into trouble by not turning in the rocket backpack soon enough, as once he saves the day during the disaster at the airfield, the media and the bad guys know what happened to the backpack. The rest of his troubles are all caused by that, which leads back to his failure to turn the backpack in timely. Now it turns out that the mobsters were only mercenaries, paid by Neville Sinclair (played by Timothy Dalton, who does a remarkable job as a villain in this role).  We have no idea why Neville wants the rocket backpack and we won't find out until the movie is almost done.  Terry O'Quinn helps round out the cast as Howard Hughes, the inventor of the rocket backpack, and as usual, does a wonderful job.  As a whole the cast does a decent job portraying the characters as they were written, but the overall story drags the movie down.  It's not really a comic book hero movie nor is it a mobster movie.  It's more of a "random person gets into the middle of evil plot" movie, and since you can't really feel emotions for the main character it's hard to enjoy the overall plot.

The Blu-ray transfer is wonderful – the colors are rich, with sharp details especially for a movie that was shot on film.  Based on reviews I've read about the DVD release, it is apparent that Disney went back and remastered this film for this transfer.  However, because the details are that sharp, the effects of the rocket backpack are very obvious, as the high definition makes the difference between live action and blue screen shots very apparent.  While it is at times distracting, it isn't as distracting as the lack of caring about the lead character.  The sound is also crisp and clear and does aid some of the scenes. The only bonus feature is the original trailer for the film; no other bonus features are included on this release.
Cast:
Directed By:
MPAA Rating: PG

For more information about The Rocketeer visit the FlickDirect Movie Database. This release has been provided to FlickDirect for review purposes. For more reviews by Roger Longenbach please click here.

The Rocketeer images are © Walt Disney Pictures. All Rights Reserved.