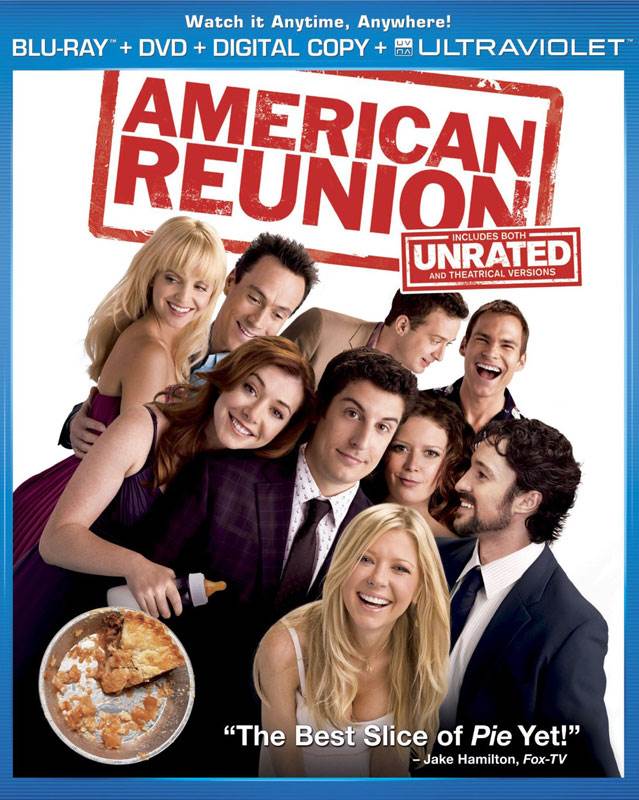 Purchase   DVD/Blu-ray/4K UHD
Rated, unrated, a double feature for those who dare... it doesn't matter which way you come at American Reunion. It's one sequel too many. Never mind the American Pie series' appeal, never mind its four maligned direct-to-video sequels, never mind debating whether a fourth film was even necessary. Reunion is a further descent into unruliness and squandered potential, unruly writing and lack of character growth. For three films, we've followed Jim and his inseparable high school foursome into adulthood, only to watch them return to their East Great Falls stomping grounds and run through the same tired motions, each of which is only getting that much more tiresome with every passing cast reunion the American Pie squad slaps together? There's no sense of purpose. No ambition, no passion, no plan. Just boys behaving badly. Again.

No surprises here. Thirteen years after graduation, the Class of 1999 holds a 13-year reunion? Lured back to East Great Falls by one-half of the dynamic MILF duo (John Cho). All your favorites fly home to Michigan for the monumental milestone: Jim (Jason Biggs) and his wife Michelle (Alyson Hannigan), Kevin (Thomas Ian Nicholas) and his ex-girlfriend Vicky (Tara Reid), Oz (Chris Klein) and the former love of his life Heather (Mena Suvari), man-out-of-time Paul Finch (Eddie Kaye Thomas), the always irritating Stifler (Seann William Scott) and other alums that didn't make it into any of the sequels, among them Jessica (Natasha Lyonne), the Sherminator (Chris Owen), Justin (Justin Isfeld), and foreign exchange student Nadia (Shannon Elizabeth). Jim's dad (Eugene Levy) shows up too, as does Stifler's mom (Jennifer Coolidge), who earns a romantic subplot of her own. .

But don't let all the returning regulars dupe you into thinking Reunion pays true homage to the original American Pie. This is Jim, Kevin, Oz, Finch and Stifler's sequel, and the girls sit the bench. Even Michelle disappears for large chunks of the movie. Unfortunately, the individual storylines are as stale and eerily preserved. Jim, failing to attend to his wife's needs and preoccupied with hanging out with the guys, stumbles upon a secret lakeside birthday party for his underage but soon-to-be 18-year-old neighbor. Kevin, happily married to a woman named Ellie (Charlene Amoia), wakes up next to Vicky after a wild night and assumes the worst. Oz, now a famous sportscaster trying to keep up with his supermodel girlfriend (Katrina Bowden), unearths old feelings he thought he'd buried long ago. Finch, as cool a customer as ever, takes a break from his travels abroad to catch up with his classmates and hook-up with a once-ugly duckling band-geek (Dania Ramirez). And Stifler... well, Stifler's still the Stifmeister, albeit more dissatisfied and unsuccessful than he envisioned thirteen years ago.

American Reunion could have been a hilarious send-up of teen comedies old and new, a smart trip down nostalgia lane with cameos aplenty, and a side-splitting commentary on generation gaps, the perils of growing older and reflecting on one's youth. But then Universal would have had to call the fourth franchise film 21 Jump Street, and Sony wouldn't have been too happy about that. Reunion, aside from being thoroughly bested by Jump Street, actually covers a lot of the same ground as American Wedding and doesn't really explore middle age, parenthood, or the awkwardness of running into former friends and flames at something as dreaded as a high school reunion. Jim and his cohorts are forced to reconcile their pasts and face a whole new breed of teenager, sure. But none of it is clever, witty or unexpected, and it's all been strip-mined by a thousand other rom-coms and sentimental gross-out comedies. Jim and Michelle have to spice up their marriage. Kevin has to choose between first love and meaningful love. Oz has to reconnect with the inner-man he lost so long ago. Finch has to get the girl and accept that being average doesn't make him less Finch-y. And Stifler has to, um, continue doing what Stifler always does and somehow still be rewarded. It's five run-of-the-mill comedies stitched together into a decaying genre with no spark of life.

There are laughs to be had certainly. Finch is, as always, the series' sharpest scholar and gentlemen, Stifler's revenge on a pack of jet skiing teens  offers a brief burst of hilarity, and Jim's relationship with his dad, though a tad forced for once, is as heartfelt and redeeming as ever. Everything else suffers from an unmistakable malaise. Most of the jokes and gags fall flat, most of the former teens' storylines go nowhere, and most, if not all, of the film feels like a chore at best, a quick pay check at worst. Well-intentioned as each one is, no one seems to know what to do with Jim and his friends now that they're all grown up, and no one -- Biggs, Hannigan, Nicholas, Klein, Thomas, Scott or their assorted castmates and sordid screen lovers -- seems sure of how to handle the characters in their late twenties and early thirties. The episodic script is strung together, the performances are lazy retreads, and the whole production hinges on a wager that American Pie fans won't notice any of the problems as long as memories of the first film are being dangled in front of their faces.

Now the film plops onto Blu-ray with an unrated/rated version. The differences are minimal though, making the addition of a second Reunion shrug-worthy. Still the both versions look and sound great, even on the small screen. As for bonus features, we start off with audio commentary: Co-writer/co-director duo Jon Hurwitz and Hayden Schlossberg serve up a commentary in which the two split their time between trying to funny and trying to be informative. The "Out of Control" Track: An erratic video commentary of sorts in which Jason Biggs, Seann William Scott and other members of the cast pop-up on screen and comment on the film.
Deleted, Extended, Alternate Scenes and Gag Reel;
The "Reunion" Reunion: Re-Launching the Series
The Best of Biggs: Hangin' with Jason B.
Lake Bake: Go lakeside with the cast and crew.
Dancing with the Oz: The innocence of Klein's smalltown kid gone hip-hopping Hollywood.
American Gonad-iators: The Fight Scene: Filming Reunion's climactic adults-v-teens fist fight. A segment on Jims Dad. Ouch! My Balls!: Biggs and company spend the better part of the shoot planting punches. And finally, American Reunion Yearbook: An interactive yearbook with clips from the entire Pie series.

More than likely some Pie purists will get their fill with the fourth film, and it is again likely that a dwindling number of those same purists will walk away satisfied. That doesn't make it a decent sequel, though. Just shrewd, sloppy fan service.
Cast:
Directed By:
MPAA Rating: R

For more information about American Reunion visit the FlickDirect Movie Database. This release has been provided to FlickDirect for review purposes. For more reviews by Chris Rebholz please click here.

John Delia
American Reunion -- I say give the guys another look-see, you won’t be disappointed.
Full Review | Grade: B