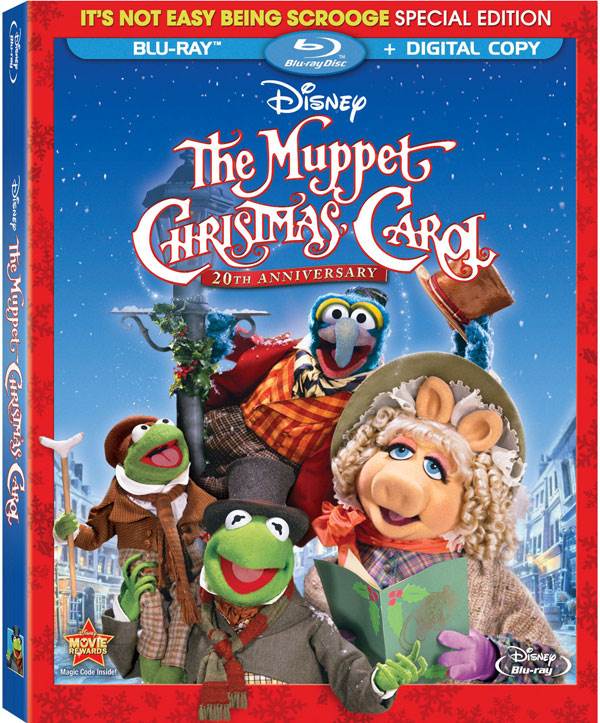 Purchase   DVD/Blu-ray/4K UHD
For the first time on Blu-ray released by Disney, is Brian Henson's version of the classic Charles Dickens story, "A Christmas Carol. While many versions of this classic have come before and I'm sure will follow, this one is quite different because it is translated through the spirit of Jim Henson's Muppets.

The story of "A Christmas Carol" has been told many times over and I would be surprised if there is anyone out there that doesn't know the story. But in case you have somehow never seen any of the versions out there it goes like this.  Ebenezer Scrooge is a mean penny- pinching "job creator" who at the mention of charity or Christmas lets out a "Bah Humbug!" Haunted by the ghost of his former partners he is told he will be visited by three ghosts, which should show him the error of his ways.  Obviously his partners didn't have 3 ghosts to show them trickle down economics doesn't work.

Where most versions of this story are dark and use Dickens old English verbiage, once in the hands of the Muppets, a song and dance must occur to lighten the mood. As the story starts out we are introduced to Charles Dickens himself, played by The Great Gonzo along with his sidekick Rizzo the rat, who narrates the story while adding comedic moments throughout. Scrooge is played by 2x Academy Award Winner Sir Michael Caine who captures t he essence of Ebenezer perfectly. What's most fun is to see where they stick all of the classic Muppet characters that we all know and love.  Kermit The Frog plays Bob Cratchit, father of Tiny Tim, played by Kermit's nephew Robin.  Waldorf And Waldorf & Statler play the Marley brothers, Fozzie Bear plays Mr. Fozziewig and even Dr Bunsen Honeydew and Beaker join in trying to collect money for charity. Along with our familiar Muppets, Brian Henson and Gang, create three original Muppets to play the Ghosts of Christmas Past, Present and Future, which really allows you to focus on the main point of the story, even while Gonzo and Rizzo are cracking jokes and spontaneous songs erupt.

While the Muppet version of "A Christmas Carol" came out in 1992, it really doesn't feel aged at all! The Muppets themselves carry a sense of style and humor that is timeless, and I'm sure it's one of those types of Christmas films you will be sharing with your family every year around this time of season.

Of course It wouldn't be a true Christmas gift if there wasn't some special goodies wrapped up in this Blu-ray edition of "The Muppet Christmas Carol". In fact, I had no clue about one of the greatest extras, until I paused the Blu-ray to leave the room for a moment. When you pause the feature, there's a knock at the door and you are greeted with one of a few version of your favorite Christmas carols, sung as only Muppets could. From the Chickens clucking "Joy to the World" to Swedish Chef giving his rendition of a Christmas classic, you will find yourself watching until the loop ends, to go back to the movie, "Laughing all the way…"

Also included is a short from Pepe the King Prawn, doing a Bio on Gonzo the Great, as well as a piece on Christmas all around the world, with Gonzo and Rizzo. The best small extra in the bonus features is a Blooper Reel. Yes! Even Muppets have blooper moments. I was rolling. It brought me right back to that special frame of mind that reminded me why the Muppets hold such a sentimental place in millions of hearts, all around the world. What better time of year, than now, for a bunch of friendly faces to remind us that it's not what you get, its what you give and to always remember…"Its true, where ever you find love It feels like Christmas.

For more information about The Muppet Christmas Carol visit the FlickDirect Movie Database. This release has been provided to FlickDirect for review purposes. For more reviews by Sean Ferguson please click here.