The final shot sums it all up perfectly. We’re all being transported back to the pure magic of the first Star Wars film and it's going to be a bumpy ride at light speed and beyond. 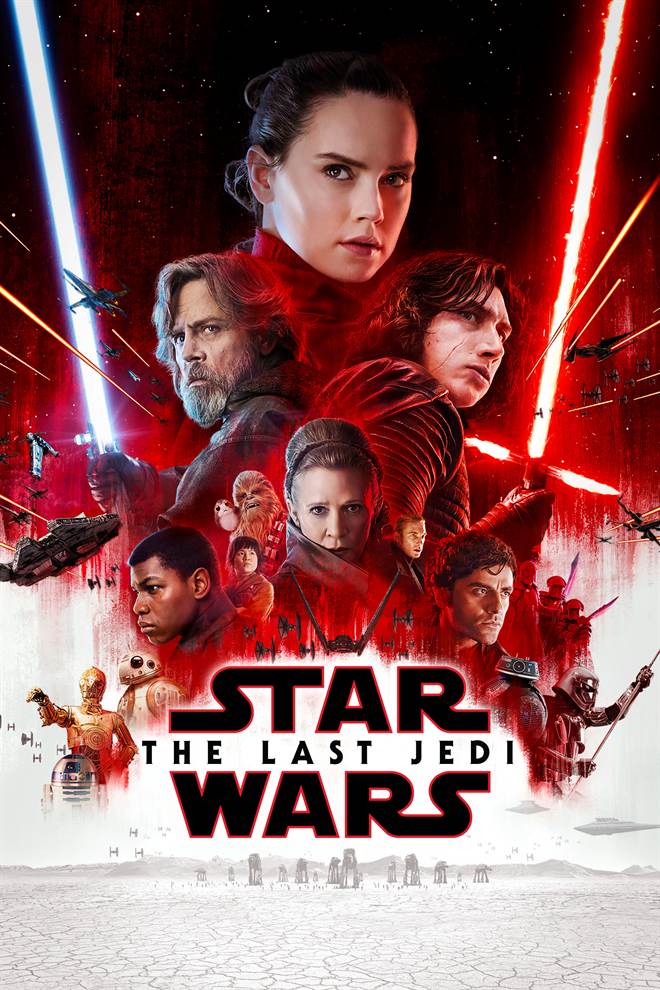 To call 'Star Wars: The Last Jedi controversial is a monumental understatement. Opening to rave reviews and unbridled anticipation, the cultural juggernaut slammed into a brick wall of fan outrage and disappointment. Perhaps no other film in the history of cinema (save the Star Wars prequels) has split the fanbase along the lines of "BEST EVER!" and "WORST EVER!". It's fitting then, that the central theme of the film is finding the balance between two extremes.  Darkness rises, and the light meets it.

Perhaps the filmmakers knew exactly what they were doing in creating a planned schism within the fanbase. Much like our characters struggle to find their place in the story, the moviegoer is torn on who to root for - and regardless of how they ended up feeling about the film - will be back for the third installment to see how it all wraps up. The Disney machine is masterful at storytelling and world-building and it's all on display here in the middle chapter of the epic saga.

The previous film ended on the side of a cliff of the most unfindable place in the Galaxy where the money shot of Luke Skywalker (Mark Hammil, Kingsmen: The Secret Service) meeting our heroine Rey became the greatest cliffhanger of all time. His priceless opening scene in this film instantly robs the moviegoer of any preconception that may have had about what was about to occur and perfectly make you love or hate the film in that one moment.

Instead of taking up the mantle as the hero of the Galaxy he once was, Skywalker is broken, old, and slightly insane. Upon being offered his old lightsaber, he simply tosses it away as if the Jedi he was no longer exists - and he doesn't. Luke has given up on the Jedi Order after his failed training of Kylo Ren and ultimate destruction at the hands of his pupil. With a history of failure and corruption, Luke has decided it's time for the Jedi to end.

Much of the film focuses on Rey (Daisy Ridley; Murder on The Orient Express) attempting to bring him back to the ways of the Jedi which she ultimately seeks to learn herself. When her efforts are in vain she decides the now evil and corrupt Kylo Ren is the galaxy's only hope.

Expanding on the connection of Rey and Kylo Ren (Adam Driver; Girls), the evil mastermind of Supreme Leader Snoke connects their minds via the force, which allows them to share intimate moments that lead to them teaming up against Snoke, much to his surprise. Eventually, Luke is convinced to help the Jedi cause and does so in a way fitting to the legacy of his former self. Despite his conflict, he is forever a Jedi, like his father before him, and he won't be the last.

The space battles, score, and creatures on display in the film are all at the height of their craft and every scene is a delight to the senses. John Williams perfectly timed musical moments to inspire awe and greatness at every turn.

The Digital HD release contains several goodies including an hour and a half "making of" that really gets into the process of director Ryan Johnson and how all of the characters' actions are modeled from his real-life experiences.

To those who dislike the film, I would add in the words of Skywalker, while training Rey in the ways of the Force: "This is not going to go the way that you think." It's a fantastic film. The naysayers, while certainly entitled to their opinions, are missing the point and the place of this movie within the Star Wars universe. As alluded to before, this may be intentional - setting us all up for the home run third installment where a new breed of rebels has been born both on screen and in the hearts of a new generation of young Jedi walking out of the theater.

The final shot of a young, seemingly Force-sensitive boy looking to the horizon with hope and wonder in his eyes sums it all up perfectly. It's all about him, and who we were at that age when we were first treated to the cultural force that is Star Wars. We're all being transported back to the pure magic of the first Star Wars film and it's going to be a bumpy ride at light speed and beyond.

For more information about Star Wars: The Last Jedi visit the FlickDirect Movie Database. This release has been provided to FlickDirect for review purposes. For more reviews by Eric English please click here.

Nathan M Rose
Rian Johnson has created an amazing film in the Star Wars saga with The Last Jedi. While certainly not the best in the series, it is certainly not the worst. One can only wait and see if J.J. Abrams can wrap up all the unanswered questions in the final film in this trilogy in 2019.
Full Review | Grade: A

Allison Rose
Sometimes the technology of 4K can be problematic with special effects especially in older films but that is not the case here. The 2160p resolution of Star Wars: The Last Jedi is fantastic, especially when viewing the final fight scene.
Full Review | Grade: A