If you just sit back and take Bad Boys For Life for what it is, a good action-comedy sequel, you’ll find it one big exciting ride. 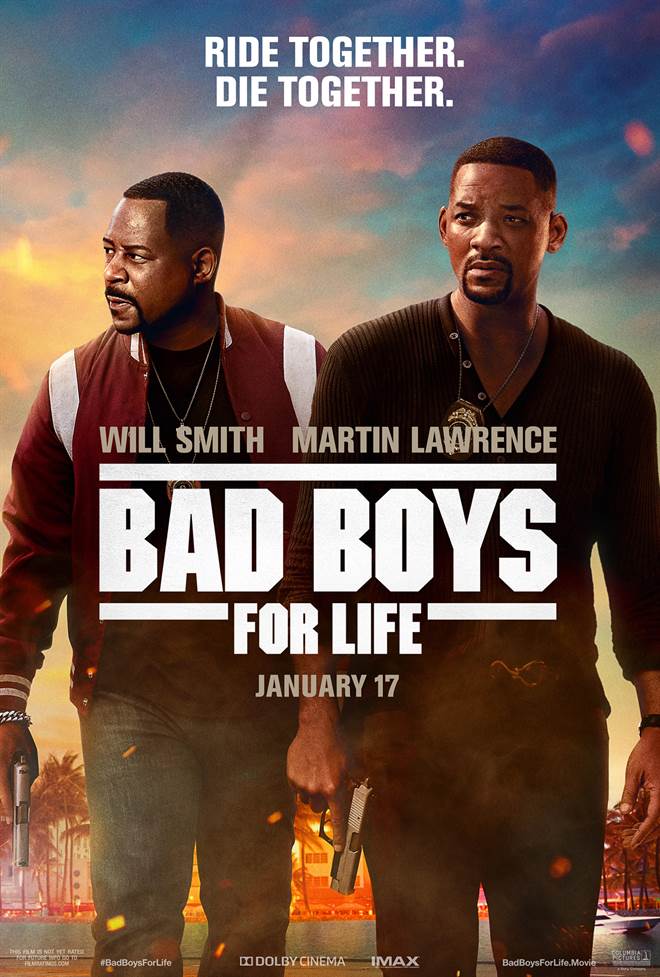 As you should know "Bad Boys For Life" is the third action-packed buddy-cop film in the Jerry Bruckheimer/Michael Bay created franchise and comes out nearly two decades after the last entry. Surprisingly, it maintains the same level of high-spirited, chaotic, action as the previous films, even though this outing moves its main characters into middle age bringing with it all the problems that it implies.

Michael Bay was supposed to direct this installment as well, but he and Will Smith demanded "some of the highest salaries in the film industry", which meant that the budget couldn't handle them both. So the Belgian directing team of Adil El Arbi and Bilall Fallah took over his duties and did a great job of imitating Bay's style and adding some of their own sensibilities along the way.

A film, any film for that matter, is only as good as its villain, and this sequel has a great one in newcomer Jacob Scipio. It's hard to top the machismo of Will Smith, but this guy manages to convince us he's more than up to the task. There's a scene near the beginning of the film that pits him against a band of criminals who he decimates in the blink of an eye, letting us know that our Boys are in real trouble this time. That feeling never leaves you, it holds true to the very end.

As for Smith and Lawrence's characters, they're still the same two bickering, fist-bumping, "Bad Boys" singing, buddies they've always been, and their 25 years as Miami cops doesn't seem to have mellowed them or dulled their propensity for wanton destruction, racing through crowded city streets, shooting anything that moves, and making light of the consequences of their actions. In other words, perfect anti-hero Heroes.

Miami narcotics detectives Mike Lowrey (Smith) and Marcus Burnett (Lawrence) have been working the streets for two decades and are beginning to feel the effects of age. Just as Marcus becomes a Grandfather and decides it's time to hang it up and retire, someone starts murdering people involved in an old case.

Before they can start looking into it, there's an assassination attempt on Mike's life. Once he recovers they decide to work together one last time to bring down the mysterious assassin who seems to have a link to Mike's past. Their captain (Pantoliano), not wanting to have two loose cannons out on the streets again, orders them to join forces with AMMO, a newly created elite team of the Miami police department. Reluctantly they begin searching for the elusive killer together.

I really liked the cast in this film; they work well with each other and appear to have been chosen with great care. Also, because they're drawn from character types we're already familiar with from tons of other films, you understand who they are immediately. This is a smart way to work because background stories on each would have slowed the film down way too much.

Of course, if you're going to make a film with Michael Bay-like stunts you have to use some of the best technology out there.  The 1080p resolution is fantastic and details are sharp especially the snake on the back of our villain's leather jacket. The Dolby Atmos audio is equally clean and showcases the familiar soundtrack.  There are a number of extras including Deleted Scenes plus an alternate ending, Outtakes, and Bloopers, Ride or Die: Making Bad Boys for Life, It's About Damn Time, Epic Stunts, Easter Eggs, Stephen A. Smith Audition and a three-part featurette entitled Partners in crime that includes Bad Boys Meet Good Kids, The Bad Guys of Bad Boys and Behind the Lens with Directors Adil and Bilall.  Some of the extras are informative and entertaining while others are lukewarm at best.

If you're missing and long for the action movies of the '90s, "Bad Boys For Life" is just your ticket. It's filled with big-screen slow-motion explosions, wild car and motorcycle chases, and circular close-up shots of the actors, all set to an overly loud and pretentious film score.

My take... If you just sit back and take "Bad Boys For Life" for what it is, a good action-comedy sequel, you'll find it one big exciting ride.

For more information about Bad Boys For Life visit the FlickDirect Movie Database. This release has been provided to FlickDirect for review purposes. For more reviews by Alyn Darnay please click here.

Allison Rose
Smith and Lawrence have always had great chemistry together and this installment does nothing to dispel that fact.
Full Review | Grade: B