How do you milk a successful book series for as much as you can? You split the last book in half and open the movie on Thanksgiving weekend. 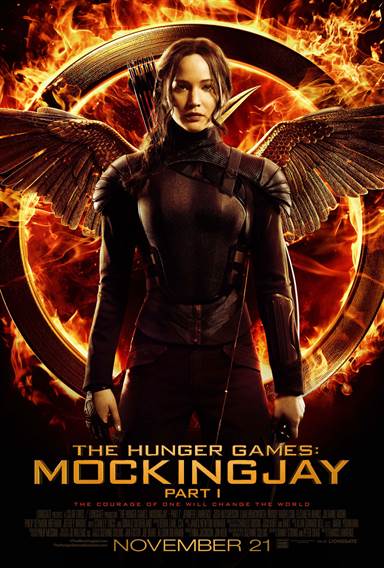 Purchase  DVD/Blu-ray/4K UHD
How do you milk a successful book series for as much as you can?  You split the last book in half and open the movie on Thanksgiving weekend.  Mockingjay Part I is the third of four movies in The Hunger Games Series opening next week.  The highly anticipated film continues the saga of Katniss Everdeen played by Jennifer Lawrence (Silver Lining's Playbook) and her conflict with The Capitol of Panem and its President, Snow(Donald Sutherland; MASH, Cold Mountain).

For those of you living under a rock, The Hunger Games is a wildly popular, young adult, book series by Suzanne Collins, which chronicles a post-revolutionary world in which the masses are broken in to 13 districts, all under the watchful eye of the Capitol.  Every year the Districts must "sacrifice" two teens to fight to the death in what is known as the Hunger Games.  Of the 24 that enter the arena only one is victorious until Katniss and Peeta Mellark (Josh Hutcherson; Epic, Red Dawn) fight the system, becoming the only couple to ever leave the arena alive and become the symbol of hope for all the districts.

The Hunger Games: Mockingjay Part I picks up where Catching Fire left off with Katniss destroying the games and getting "rescued" by District 13. As the Poster Child for the new revolution against the Capitol, she finds herself as much of a manipulation tool by the leaders as she was by President Snow.  Torn between wanting to destroy Snow and wanting to save Peeta, who is a puppet of the Capitol, Katniss is emotionally battered throughout the film.

Lawrence is excellent once again as the female lead.  Mockingjay Part I is much more emotional than the first two films and she plays the role beautifully.  I was more invested in her and felt many more emotions as a viewer than I had previously.  She is at moments as strong as she always was and, at times, more broken than the audience has ever seen her.  Woody Harrelson (Cheers, Now You See Me) as Haymitch Abernathy gives a solid performance for the limited time he on screen and Elizabeth Banks (Pitch Perfect, Love and Mercy) as Effie Trinket adds some much needed comic relief.  Julianne Moore (Crazy, Stupid, Love, Carrie), as President Coin, leaves an impression on your mind for all the right reasons.  The two weakest links in the cast are Hutcherson and Liam Hemsworth (Love and Honor, Empire State) as Gale Hawthorne.  I'm not sure if they pale compared to the rest of the cast especially Lawrence or they just aren't very good actors in general.

The movie sticks closely to the book and moves along at a good pace for the most part.  Director Francis Lawrence (Constantine, Gotham) , did a great job with the visuals of war while not  jumping  too quickly from one scene to another, which can sometimes distract the audience.  There were only a few times I felt it slightly dragged on but there weren't many and those moments were over rather quickly.

True fans of the series won't be disappointed by the latest installment and new viewers will enjoy the 2 hours spent in the theater.  It's definitely worth the price of admission.  I can't wait for Part II next year and I will certainly be sad when this series is over.  B+

Download The Hunger Games: Mockingjay, Part 1 in Digital HD/4K from the iTunes store.