Home / Reviews / Fantastic Beasts and Where to Find Them

Fantastic Beasts and Where to Find Them (2016) Review

When it comes to wizards, J.K. Rowling can do no wrong. 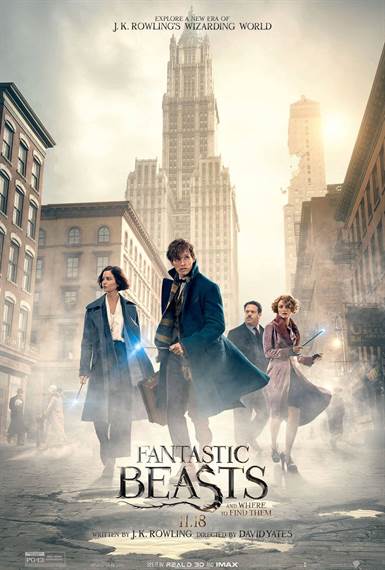 Purchase   DVD/Blu-ray/4K UHD
Let's face it J.K. Rowling has a knack for spinning a magical tale.   We all know her story.  Welfare mom who wrote a novel about a boy wizard that ended up captivating our hearts and spawned not only seven movies but also merchandising galore and its own spot in a major theme park.   When the Harry Potter series ended, people were sad to see it go.

Don't fret!  Rowling is back with Fantastic Beasts and Where to Find Them.  This newest tale, Rowling has said, is neither a sequel nor prequel to the Potter story but rather a parallel storyline.  While the film addresses Hogwarts and Dumbledore, it is its own story set in New York 70 years before Harry Potter found out he was a wizard.

Writer Newt Scamander (Eddie Redmayne; The Danish Girl) travels to New York City on a quest to find magical beasts.  In his suitcase he carries numerous animals he looks after and that happens to be illegal in the United States.  When his animals get out of the case, due to a mix up with a no maj (No Magic human) named Jacob Kowalski (Dan Fogler; The Goldbergs), Newt has to round them up before he gets caught.

Exasperating his search is a magic agency investigator named Porpentina Goldstein (Katherine Waterson; Steve Jobs) who wants to bring him into the underground wizard police for letting the creatures escape.  However, during their adventures around Manhattan, they discover a powerful obscurous is loose, killing people and destroying property.  In order to restore order in the city, they have to team up with the no maj, Portentina's sister Queenie (Alison Sudol; Between Us) and members of the Magic Agency, including Percival Graves (Colin Farrell; Horrible Bosses).  In the end, things go back to the way they were, yet we learn that not everything and everyone is not exactly as they seem.

When it comes to wizards, Rowling can do no wrong and she not only wrote the story she also wrote the screen play for this film which is very well done.  The story makes sense and flows beautifully.  It has a certain "Potterish" feel while not imitating the previous series, but I suspect that is in part to Director David Yates (The Legend of Tarzan) who directed four of the Potter movies.  With the way he shoots, Yates tends to cast a grey "glow" over the whole film, kind of like a layer of grit you just can't seem to wipe off.  It certainly is distinctive and readily identifies a movie as a Yates creation.

The cast was well chosen. Fans of the book will note Newt seems to be a shy introvert who prefers animals to humans and Redmayne portrays that beautifully.  Waterson blends well with Redmayne as the awkward yet competent agent looking to do the right thing but messing things up at almost every turn.  Fogler is great as the no maj who accidentally gets mixed up in the magical world and he is a stand out in every scene he is in.  Sudol also compliments the cast well and Farrell is good as Agent Grave, although I find it often difficult to lose him in his character and I just see Colin Farrell up on the screen instead of the person he is trying to portray.  Honorable mention also needs to go to Ezra Miller (Perks of Being a Wallflower) as Credence, the tortured, outcast young man with a secret.

The creatures are certainly a sight to see and while some are cute and colorful others are just disgusting and creepy.  The special effects are very well done, so, for the most part, you feel immersed in the world and not distracted by poorly executed effects.

I was a little skeptical before seeing Fantastic Beasts and Where to Find them because I was afraid it would be simply a Potter continuation. However, I am happy to report I was wrong. The film is a stand-alone feature that references Potter but doesn't rely on the previous films to for it to make sense.  It fully envelopes the audience in Newt's magical world and takes us along on his adventure.  I look forward to the next films in this new, magical series.

Purchase a DVD/Blu-ray/4K UHD physical copy of Fantastic Beasts and Where to Find Them today at Amazon.com

Download Fantastic Beasts and Where to Find Them in Digital HD/4K from the iTunes store.

Listen to the Fantastic Beasts and Where to Find Them soundtrack on Apple Music.

For more information about Fantastic Beasts and Where to Find Them visit the FlickDirect Movie Database. This release has been provided to FlickDirect for review purposes. For more reviews by Allison Rose please click here.

Fantastic Beasts and Where to Find Them images are © Warner Bros.. All Rights Reserved.

Read More Reviews For Fantastic Beasts and Where to Find Them