Marvel Studios usually does a good job with these films but with Black Panther, they stepped up their game and it pays off. 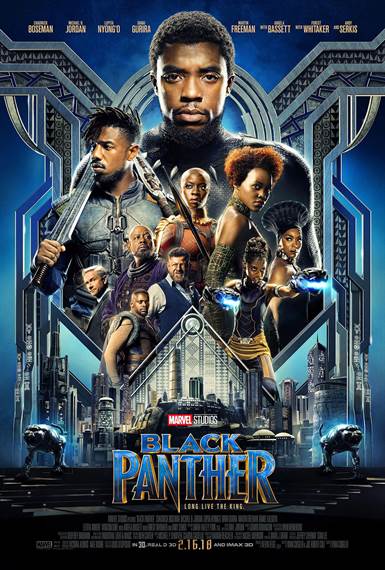 Purchase   DVD/Blu-ray/4K UHD
Over the years Marvel Studios has introduced us to an army of superheroes.  From Iron Man to Captain America, Star-Lord to Black Widow and Spider-Man to Hulk they have given us a plethora of characters to enjoy while watching them save the world.  This week they bring us an African King with powers in Black Panther (Chadwick Boseman; Get On Up).   While we met T'Challa before in Captain America: Civil War we now get to see him become King of his country, Wakanda, and learn his backstory as well as that of the land and people.  The result is a fantastic film that almost anyone is certain to enjoy.

After the death of his Father, King T'Chaka (John Kani; The Ghost and the Darkness), T'Challa/Black Panther returns to Africa to take his place on the throne.  As leader of his people, he is tasked with protecting them and the country's secret – vibrainium.  The element is the strongest on earth and the people of Wakanda hide it away for fear that in the wrong hands it will lead to mass destruction weapons that will cause countries to go to war and millions of people to die.  They also protect the glowing purple flower that gives the Black Panther his supernatural abilities – again for the same fears.

Things become complicated when Wakandan  (is that even a word since the country is make-believe?) archenemy Ulysses Klaue (Andy Serkis; War for the Planet of the Apes) suddenly re-emerges from hiding and steals some vibrainium.  As Black Panther and the CIA chase him though, he gets away only to wind up dead in Wakanda.  His executioner drags Klaue's body to the country in order to send a message.  This new enemy, Erik Killmonger (Michael B. Jordan; Creed), as it turns out is related to T'Challa and returns to the homeland he never really knew to challenge the King for his throne and Black Panther status.

Marvel movies are always highly anticipated and ever since Black Panther debuted over a year and a half ago in Captain America: Civil War audience have been anxiously awaiting this film.  Luckily, they are sure to not be disappointed.  Director Ryan Coogler (Creed) intertwines action and drama with magnificent scenery that keeps the viewer entranced throughout.  His sweeping camera angles offer various vantage points to witness the story and effects unfold.

It seems the cast was carefully chosen and the effort pays off in spades.  Boseman balances the royalty of a king with the athleticism of a superhero expertly and Jordan is masterful as the villain.  Supporting them are four strong women including Angela Bassett (Olympus Has Fallen) as T'Challa's mother, Letitia Wright (The Commuter) as his technology savvy sister, Lupita as a Wakandan General sworn to protect the King.  Forest Whitaker (Rogue One: A Star Wars Story), Serkis and Martin Freeman (The Hobbit: Battle of the Five Armies) round out this talented cast.

The plot is well thought out and weaves an intricate story that is engaging and interesting.  The movie offers an inside look into the African heritage and pays homage to the culture.  Of course as a white woman who grew up in suburban New Jersey, I really have no basis for comparison so I make that claim with all due respect.  I did find it mesmerizing and eager to absorb every tidbit handed out.  There was also enough humor in the script to give some levity to a heavily weighted plot.

Marvel Studios usually does a good job with these films but with Black Panther, they stepped up their game and it pays off.  This is a fantastic film with excellent special effects, a solid plot, terrifically choreographed fight scenes and an amazing cast.  I'm not sure what they can do to top it but I look forward to watching them try.

Download Black Panther in Digital HD/4K from the iTunes store.

Listen to the Black Panther soundtrack on Apple Music.