Phoenix delivers an Oscar-worthy performance in The Joker. 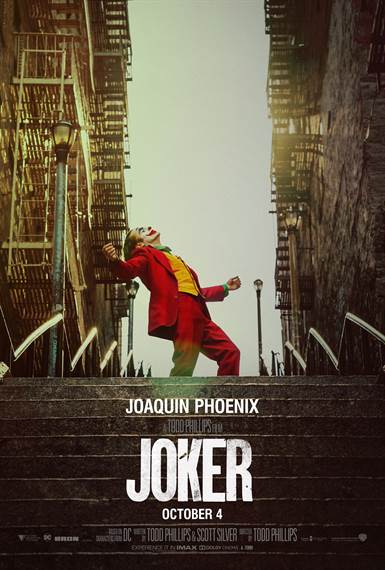 Throughout the years, Batman has had numerous nemeses including Penguin, Catwoman, Two-Face, and The Riddler to name a few.  Perhaps one of his most well-known antagonists though is probably Joker.  The menacing figure in clown makeup and a purple suit has always come across as highly unstable.  However, we never truly knew what made Joker so evil and crazy. While it had always been said he fell into a vat of chemicals that disfigured him and made him go mad, we never knew anything about his early life…until now.  Warner Bros. offers audiences a possible look inside Joker's origin story with their latest feature film, Joker.

Arthur Fleck (Joaquin Phoenix; Walk the Line) lives with his ailing mother, Penny (Frances Conroy; Six Feet Under) and works as a clown.  He also has a disorder that makes him laugh uncontrollably at inappropriate times due to previous brain trauma from having been abused as a child.  Arthur wants to be a standup comedian and tries to write jokes.  He has an active imagination and daydreams about his pretty neighbor, Sophie (Zazie Beetz; Deadpool 2), being his girlfriend and about being on the Murray Franklin (Robert DeNiro; Raging Bull) Show.

In the course of several days, Arthur is beaten up on the subway by some young businessmen that he shoots and kills, he finds out his social services and medications are being cut off due to budget cuts, and he gets fired from his job.  His mother also has a stroke and while in the hospital he kills her because she is delusional and believed her former employer, Thomas Wayne (Brett Cullen, Person of Interest), was Arthur's father even though Arthur finds out he was actually adopted.  Finally, after trying standup, Arthur is made fun of on television by his idol, Franklin, who then invites Arthur to be on the show.  Once there Arthur admits to killing the three men on the subway, shoots and kills Franklin and becomes a symbol for all of those in Gotham who are poor and tired of the inequity of wealth.

Phoenix is masterful as the mentally disturbed Arthur/Joker.  He plays on one's sympathy while alternately coming across as creepy.  Cullen makes Wayne less likable than past portrayals and the whole film has an undercurrent of a political agenda of "us" versus "them". Conroy is the stereotypical sweet, old woman who seems innocent but who has a disturbing past.

It is easy to see why theaters and authorities are concerned that the film will incite violence.  The film has an uneasiness to it both from Arthur's story and from watching the public becoming fed up enough to riot in the streets.  Director Todd Phillips (The Hangover) offers some spectacular shots that help set the overall tone and feel of the film, such as the rain falling as Arthur enters Arkham State or how we watch Arthur's disjointed ballet movements in a dirty, public restroom after the subway shooting. He also utilizes darker lighting to give the whole movie a sense of heaviness.

The Joker has always been portrayed as a menacing, demonic like psychopath in the past so it was difficult for me to reconcile this version of a vulnerable, mentally ill, disturbed man with the pure evil villain I am used to.  I never thought I would pity the Joker but Arthur is someone who evokes sympathy from the audience while at the same time making us angry at his lack of empathy.  The film overall is a little difficult and uncomfortable to watch and the whole subplot of the neighbor was completely unnecessary but it is an interesting take on one of Batman's best-known arch enemies and Phoenix delivers an Oscar-worthy performance.

Download Joker in Digital HD/4K from the iTunes store.

Listen to the Joker soundtrack on Apple Music.