Home / Reviews / Prince of Persia: The Sands of Time 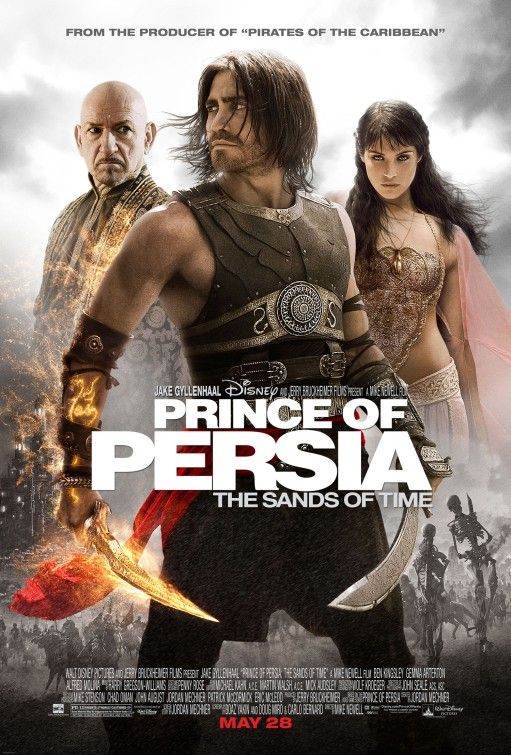 Purchase   DVD/Blu-ray/4K UHD
Summer 2010 started off with a bang two weeks ago with Iron Man 2 smashing its way onto the silver screen, and this Memorial Day continues the summer blockbuster streak with Disney's Prince of Persia: The Sands of Time.

Ubisoft's popular video-game series of the same name gets adapted for the big screen in this sweeping fantasy adventure, starring Jake Gyllenhaal and Gemma Arterton. The setting is sixth-century Persia. A nefarious nobleman covets the Sands of Time, a legendary gift from the gods that allows its possessor to turn back time. Whoever owns the Sands of Time has the power to rule the world, and this villainous lord would use that power to enslave all of humanity.  The only person capable of defeating this tyrant and saving the world is Dastan (Gyllenhaal), a youthful prince.  Now, with plucky princess, Tamina (Gemma Arterton), by his side, Dastan will attempt to prevent the Sands of Time from falling into the wrong hands.

If you are one that falls into the preconceived perception that this is "just another video-game movie" you couldn't be further from the truth. Director Mike Newell (Harry Potter and the Goblet of Fire) has skillfully crafted an adventure film with the likes not seen since The Mummy or Indiana Jones.

The set pieces are simply amazing -- taking you back to the days of old by creating a Middle Eastern land that you simply fall in love with.

While being a bit apprehensive at first having leading man Jake Gyllenhaal carrying such a large film on his shoulder, he does an amazing job of making you fully believe he is a "street rat" turned prince. The supporting cast, including the fairly newcomer Gemma Arterton are fully utilized to their potential and are not just fluff to the film.  In fact some suprising comic relief comes from method actor, Alfred Molina (Spider-man 2) when needed in just the right places.

Dubbing the last few weeks of May 2010 as Prince of Persia week, Disney has spared no expense trying to get the general movie public's awareness of the movie on high alert.

Ever since Disney and Producer Jerry Bruckheimer revitalized the adventure genre with Pirates of the Caribbean, they have been looking to strike gold again; while Prince of Persia: The Sand of Time is not at the same level, it is an extremely fun ride that I personally hope warrants a couple of sequels.

If you have some time this memorial day weekend and want to see a film, Prince of Persia: The Sands of time is definitely a great way to spend it.

For more information about Prince of Persia: The Sands of Time visit the FlickDirect Movie Database. For more reviews by Nathan M Rose please click here.

Prince of Persia: The Sands of Time images are © Walt Disney Pictures. All Rights Reserved.

Read More Prince of Persia: The Sands of Time Reviews

Chris Rebholz
Once again we have another movie based off a video game. This time around it is Prince of Persia: The Sands of Time. The difference with this movie and most others that are based off of video games is that this time around Disney is producing it so we can expect a nice big budget.The movie opens wit...
Full Review | Grade: B