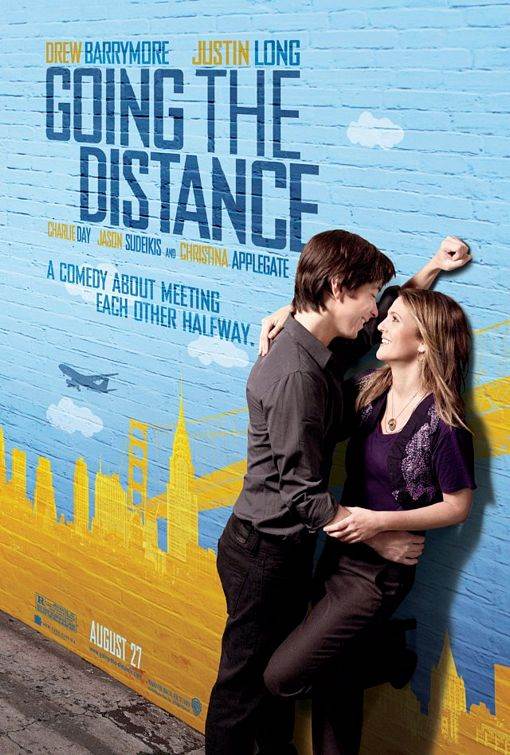 Purchase   DVD/Blu-ray/4K UHD
If past history is anything that indicates the dog days of summer, it is when the films that did not make the summer blockbuster cut are dumped into theaters.

Most of these movies are throw-away movies and do not deserve a second look.  However, this year seems to be the exception with many great films coming at the end of summer, and "Going the Distance" is definitely one of them.

Going the Distance tells the story of Erin (Drew Barrymore) and Garrett (Justin Long) who try to successfully have a long-distance relationship.

Garrett and Erin meet at a bar and quickly realize that there is something between them.  Erin, however, will only be in New York City for the summer. She will eventually be returning to San Francisco to go to Grad School.  At the end of their six weeks together, they realize that they want to stay together and decide to give the "long-distance relationship-thing" a "go".  They feel they both have a handle on it at first, but then as the relationship progresses, they truly see how hard it can be to live so far apart and how difficult a meaningful long-distance relationship can be.

Dramedies, are typically cliché, and the comedy is very minor compared to the drama of the story.  However, Going the Distance takes this idea and throws it out the window!

The cast is simply amazing.  Justin Long proves he can be a leading man in a film, and Drew Barrymore shows she can do comedy as well as she does drama.  Aside from the two main actors, the cast is rounded out by Charlie Day, Jason Sudeikis, Ron Livingston, and Christina Applegate. These actors fit right in the story and provide great comic relief when needed, as well as helping to move the story along.

The director, Nanette Burstein (American Teen), keeps the story evenly paced; and before you realized it, the end credits were rolling, and you just had two hours of laugh-out-loud fun!  If you are looking for a fun time this holiday weekend at the movies, definitely go to see "Going the Distance".  It is a film that both you and your loved one will enjoy!
Cast:
Directed By:
MPAA Rating: R

Chris Rebholz
A long distance relationship is never easy; at some point in our lives most of us have done it. This is the subject of the romantic comedy Going the Distance with Justin Long and Drew Barrymore. Justin Long plays Garrett, a thirty-something who works for a record label. Drew Barrymore plays Eri...
Full Review | Grade: B