Home / Movie Database / The Nutcracker and the Four Realms

The Nutcracker and the Four Realms (2018) 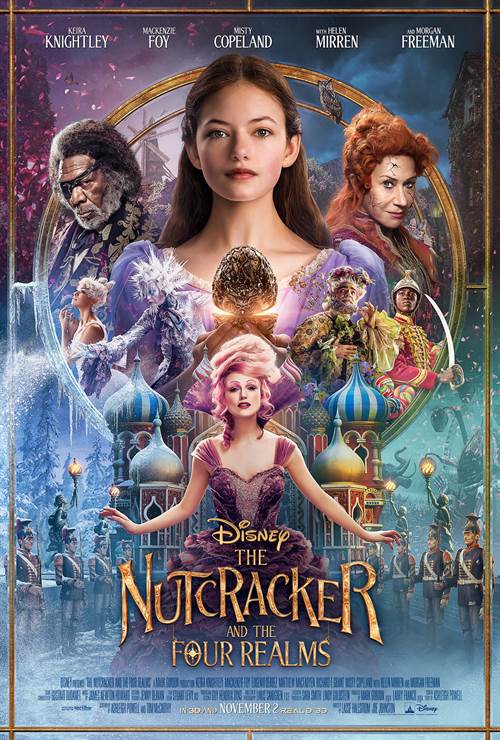 All Clara (Mackenzie Foy) wants is a key - a one-of-a-kind key that will unlock a box that holds a priceless gift from her late mother. A golden thread, presented to her at godfather Drosselmeyer's (Morgan Freeman) annual holiday party, leads her to the coveted key, which promptly disappears into a strange and mysterious parallel world. It's there that Clara encounters a soldier named Phillip (Jayden Fowora-Knight), a gang of mice and the regents who preside over three Realms: Land of Snowflakes, Land of Flowers and Land of Sweets. Clara and Phillip must brave the ominous Fourth Realm, home to the tyrant Mother Ginger (Helen Mirren), to retrieve Clara's key and hopefully return harmony to the unstable world.

Purchase DVD/Blu-ray/4K UHD physical copy of The Nutcracker and the Four Realms today at Amazon.com

Download The Nutcracker and the Four Realms in Digital HD/4K from the iTunes store.

Listen to the The Nutcracker and the Four Realms soundtrack on Apple Music.


Win a Blu-ray Copy of Walt Disney Pictures' The Nutcracker and t...  1/22/2019 11:43 AM EST
The Holiday season is generally a magical time of the year for most people including all kinds of family traditions.  For some, those traditions include enjoying The story of The Nutcracker - Tchaikovsky's famous ballet.  This past November Disney reimagined it in the latest Holiday Feature THE NUTCRACKER AND THE FOUR REALMS.  With an all-star cast, the movie offered stunning costumes and scenery ...  More>>

Enter For A Chance To Win A Pass For Two To A Special Advance Sc...  10/23/2018 2:20 PM EST
With the holiday season quickly approaching Disney is gearing up to release their latest feature THE NUTCRACKER ANS THE FOUR REALMS.  They, along with Flick Direct want to give a few lucky individuals the chance to see it before it opens nationwide on November 2, 2018.Enter for your chance to win complimentary passes to an Advance Screening of THE NUTCRACKER AND THE FOUR REALMS by following FlickD...  More>>

The Nutcracker and the Four Realms 4K Ultra HD Review 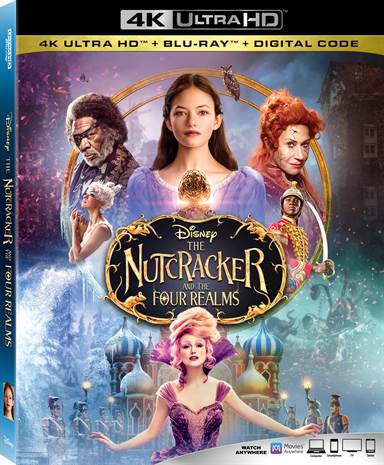 The Nutcracker story is synonymous with the Christmas holiday season. The famous ballet is known the world over and has been enchanting audiences for well over a hundred years. Disney took this classic story and released The Nutcracker and the Four Realms back in November to some pretty critical reviews. Now, the film will be available on 4K UHD tomorrow, January 29.

The film, which is set in 1879 Christmas time London, is a family-friendly tale that centers on Clara who is played by Mackenzie Foy (The Conjuring).  Clara and her family are dealing with the death of her mother and because of this, Christmas has lost all of its meaning and feeling.  Clara's gift from her late mother is a Fabergé Egg, which has a keyhole but no key.  This gift eventually sets off Clara's adventure into the four realms.

The realms are filled with wonder and familiar faces.  Morgan Freeman (The Shawshank Redemption) appears as Clara's godfather, Drosselmeyer, while Keira Knightley (Pirates of the Caribbean: The Curse of the Black Pearl) and Helen Mirren (The Queen) are rulers of two of the realms.  Keria plays the magical Sugar Plum Fairy while Mirren plays Mother Ginger.

This film left me feeling conflicted. I didn't feel this was a great movie but it is not a bad one, either.  So let's get this out of the way first - the bad: The story is somewhat weak and there is little emotional depth that makes me care about any of the characters.  The Good: now for all of those faults, I can tell you why you should see this movie.  The visuals are absolutely stunning - the design team and the special effects team deserve all of the awards that are out there.  I will even go so far as to say you could watch the movie on mute and not miss a thing.

Again, the real star of the film is the gorgeous production design, colorful characters, dazzling costumes, and incredible special effects.  All are a visual treat and proves to be the real prize of this holiday opus.  The attention to detail is astonishing and the color palette pops beautifully.  Of course, this is all accentuated by the amazing 2160p high definition resolution offered by 4K technology.  Additionally, the Dolby Atmos audio complements the video quality for a truly magical viewing experience.  There are also a number of extras to be enjoyed in this combo pack Bonus features include:

Disney is known for producing some terrific movies, both animated and live action but for me, this one could have been so much better for me with a stronger script.  The cast is great, the visuals are magnificent and if you love holiday tradition, you will want to own a copy of The Nutcracker and the Four Realms, as I'm sure it will become part of the standard holiday viewing repertoire for years to come.

Read More The Nutcracker and the Four Realms Reviews