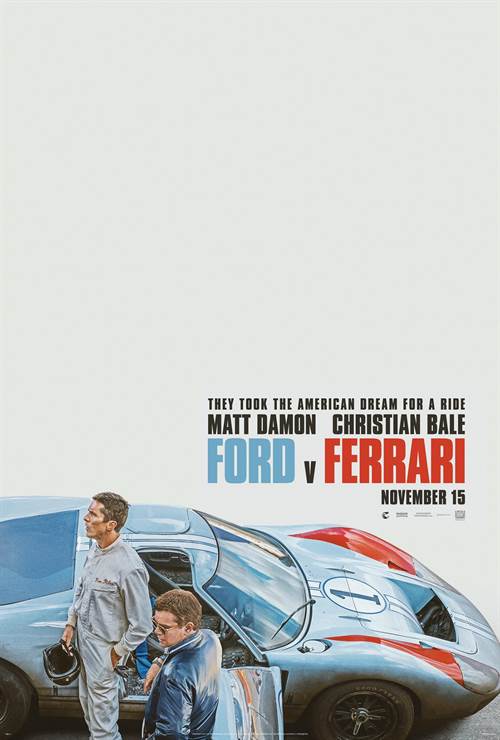 Academy Award-winners Matt Damon and Christian Bale star in FORD v FERRARI, based on the remarkable true story of the visionary American car designer Carroll Shelby (Damon) and the fearless British-born driver Ken Miles (Bale), who together battled corporate interference, the laws of physics, and their own personal demons to build a revolutionary race car for Ford Motor Company and take on the dominating race cars of Enzo Ferrari at the 24 Hours of Le Mans in France in 1966.

Listen to the Ford v Ferrari soundtrack on Apple Music. 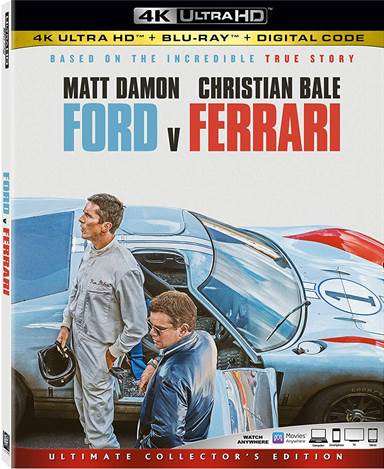 Some memories never fade and a great film sometimes has a way of making them all that more vivid. One I'll never forget is racing through the canyons of Beverley, Coldwater, Laurel, and Topanga in my brand new GT 350 Ford Shelby Mustang. Sure wish I still owned that car, it has always been my favorite and fastest. Thank you, Carroll Shelby, for a lifetime of memories.

Carroll Shelby, if you didn't know, was an American automotive designer, race driver, and entrepreneur. During his racing career, he drove for the Aston Martin and Maserati teams and was named Sports Illustrated's Driver of the Year in both 1956 and 1957. Before retiring from racing in 1959 due to health problems, he and co-driver Roy Salvadori won the grueling ‘24 Hour of La Mans' Race. He then turned his talents to modifying and building high-performance sports cars.

All of that aside, this High-Performance Film is about how he and his friend Ken Miles, a British born sports car racing engineer and driver, got involved with the Ford Motor Company and what they struggled to accomplish together. It's a story, a film, and two brilliant performances you'll find yourself totally wrapped up in.

In 1963, in order to combat lagging car sales and at the suggestion of corporate executive Lee Iacocca (Bernthal), The Ford Motor Company decided to boost its image by getting into the international racing game.  When Henry Ford II's (McKinnon) bid to buy out Ferrari falls flat and he is personally insulted by Enzo Ferrari, Ford's racing division is tasked with building a car that can beat the venerable Italian Company at La Mans, the world's oldest active sports car endurance race which has been dominated by Ferrari's powerful machines.

Knowing that they can't do it without first-hand knowledge of racing and race cars, the Ford executives turn to Carroll Shelby (Damon) to head up the design and construction of a vehicle strong enough and powerful enough to win the prestigious race. Knowing he'll need the talents of someone with real racing genius to pull off this almost insurmountable task, Shelby turns to his friend, race driver, and engineer, Ken Miles (Bale) for help.

Expecting to have control over the construction and racing of the new vehicle, the boys soon find out what life under the thumb of unknowledgeable overseers is like. Together they battle corporate politics, company interference, the laws of physics, and their own personal demons in pursuit of mechanical perfection.

If you're a racing fan, like fast cars, love to drive, or if you like great underdog stories, exciting action-filled movies, or great acting performances, this is your film. Director James Mangold has created an instant classic, one you'll remember for a long, long time. It's definitely Oscar-worthy for Best Picture of the Year.

Christian Bale gives us another brilliant characterization and is the perfect foil for Matt Damon's stellar performance as Shelby. It's almost impossible to separate one from the other; they are two co-joined pieces of the same puzzle. Give them both the Oscar right now, and be done with the wait. Or just give the whole cast an Oscar for Best Ensemble; they are all really that good.

The 4K disc has a 2160p resolution and 2.39:1 aspect ratio making for some striking visuals and sharp details.  The Dolby Atmos audio serves as an excellent complement to the video quality, especially during the racing scenes.  The extras in this combo pack are housed on the Blu-ray disc and includes Bringing the Rivalry to Life (an eight-part, hour-long feature about making the film and the real-life Shelby and Miles) and Theatrical Trailers.

My take… "Ford v Ferrari" is by every measure a great film, the kind they rarely make anymore. Rev your engine, throw yourself into first gear, and lay some rubber as you take off to see it!