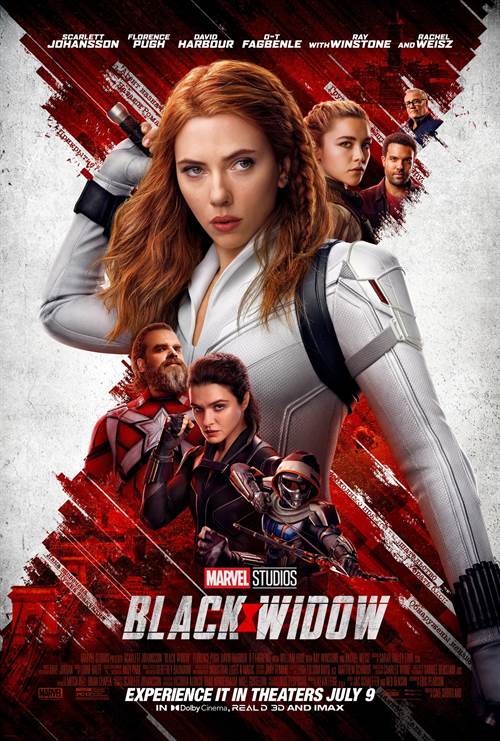 In Marvel Studios’ action-packed spy thriller “Black Widow,” Natasha Romanoff aka Black Widow confronts the darker parts of her ledger when a dangerous conspiracy with ties to her past arises. Pursued by a force that will stop at nothing to bring her down, Natasha must deal with her history as a spy and the broken relationships left in her wake long before she became an Avenger. Scarlett Johansson reprises her role as Natasha/Black Widow, Florence Pugh stars as Yelena, David Harbour portrays Alexei/The Red Guardian, and Rachel Weisz is Melina. “Black Widow”—the first film in Phase Four of the Marvel Cinematic Universe—is directed by Cate Shortland and produced by Kevin Feige.

Download Black Widow in Digital HD/4K from the iTunes store.

Listen to the Black Widow soundtrack on Apple Music.


Scarlett Johansson Suing Disney Over Dual Black Widow Release  7/29/2021 4:54 PM EST
Scarlett Johansson has filed a lawsuit against Disney for breach of contract. The suit claims that the actress' contract was breached when her film, Black Widow, was released simultaneously on Dinsey+ and in theatres.Johansson's compensation for the film was to be partly based on the box office sales, which would, in theory, be less if there is more of an opportunity for people to watch from home....  More>>

Black Widow Earns $13 Million in Previews Ahead of Opening Day  7/9/2021 3:10 PM EST
Marvel's "Black Widow", which officially opens today, has already earned over $13 million in previews, and now, is expected to earn over $80 million at the box office for its opening. the film will also be available for purchase on Disney+ for $30.00."Black Widow" stars Scarlett Johansson, Florence Pugh, David Harbour, and Rachel Weisz. The film's timeline takes place between the events of "Captai...  More>>

Marvel's Black Widow to Have Simultaneous Theatrical and Streami...  3/23/2021 4:34 PM EST
Today, Disney Media & Entertainment Distribution announced an updated summer film release schedule.Among the changes was Marvel Studios' "Black Widow", which will now be released both on Disney+ and in theatres on July 9. Another notable film that changed was Disney's Live-Action "Cruella", now set for release on Disney+ and in theatres on May 28.Kareem Daniel, Chairman, Disney Media & Entertainme...  More>>

Florence Pugh to Be New Face of Female Led Marvel Films  7/7/2020 10:27 AM EST
With the upcoming "Black Widow" film, we may be saying goodbye to Scarlett Johansson but we will be getting a whole new female-led storyline to look forward to.Cate Shortland, the film's director, has more or less said that they will be using the film to bring Florence Pugh's character Yelena Belova front and center."[Kevin Feige] realized that the audience would expect an origin story so, of cour...  More>>

Marvel's Black Widow Release Delayed  3/17/2020 3:12 PM EST
The release of Marvel's "Black Widow", starring Scarlett Johansson, has been delayed until further notice. The film was set for a May 1 release but with the spread of the coronavirus and theaters across the nation closing, the decision was made to hold off. This is the next in a series of films that have already been postponed, such as "No Time to Die" and "F9", and "A Quiet Place Part II". There ...  More>> 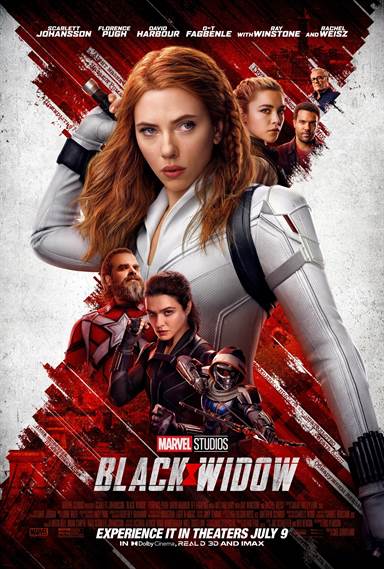 In 2008 the Marvel Cinematic Universe, or MCU as it is often referred to, began phase one with the feature film Iron Man starring Robert Downey Jr. (Sherlock Holmes) as Tony Stark.  Over the next twelve years, audiences were introduced to numerous comic book characters, as a series of fifteen-plus films were released.  Throughout the years, we have come to know the Avengers, their abilities, their weaknesses, and their stories.  Natasha Romanoff (Scarlett Johansson; The Island), however, has always remained somewhat of a mystery…until now.  Black Widow, which kicks off phase four of the MCU, offers some insight into Natasha's past and helps to explain why she is so secretive.

Natasha and her family live a normal, suburban life in Ohio. Mom/Melina (Rachel Weisz; The Mummy) stays at home, Dad/Alex (David Harbour; Stranger Things) works in an office, and Natasha plays with her younger sister, Yelena (Florence Pugh; Midsommar).  Everything is routine and boring, until one day when it isn't.  Suddenly, they are fleeing their home while being chased by the authorities, escaping in a plane the size of a crop duster, and landing in Cuba on a Russian military base and separated from each other.

Fast forward approximately twenty years and Natasha is hiding out, wanted for violating the Sokovia Accords when she helped The Winter Soldier escape.  Isolated in Norway, she suddenly finds herself attacked by an "Iron Man" like being and realizes her assailant is after some vials Natasha didn't even know she had.  Based on the clues, she finds herself in Budapest, face to face with the young woman she once thought was her sister.  Together they find Alex/Alexei in a Russian jail and the three then escape to find Melina.  Their "Family Reunion", however, is cut short when they realize they have a common enemy they must find and defeat.

The MCU is known for its action sequences and Natasha is a central figure in these scenes.  Black Widow offers several opportunities to watch the orchestrated dance that constitutes the MCU fight scenes.  The fight scenes are fast, precise, and choreographed to a tee.  The movie, however, tends to focus more on the plot than the action, which creates a balance between the emotional and the physical components and while there are facts about Natasha's life that are filled in, Black Widow is not a true origin story.

Ultimately the strength of the movie is not in the plot or the script but the actors.  Of course, Johansson reprises the role she has most often been associated with and she pulls off the lead actress title beautifully.  Weisz (looking a little long in the tooth) blends well with the other actors, making her performance believable.  Harbour is there mostly for comic relief, and he portrays the stereotypical drunk, Russian former spy perfectly.  However, the top award should belong to Pugh.  She draws your attention from the moment she appears on screen (which is hard to do since many of her scenes are with Johansson) and makes Yelena seem hard and vulnerable all at the same time.

There is no question that the MCU has become a giant in the superhero genre of filmmaking.  For over a dozen years they have entertained audiences all over the world and, luckily, show no signs of stopping anytime soon. Phase four seems to be focused on some of the lesser-known heroes and combines both film and television mediums. From WandaVision to Loki to Doctor Strange in the Multiverse of Madness, there is plenty of Marvel content out there or coming soon

If Black Widow is the opening film for this phase of the MCU, then they are off to a good start, and I am excited to see what comes next.