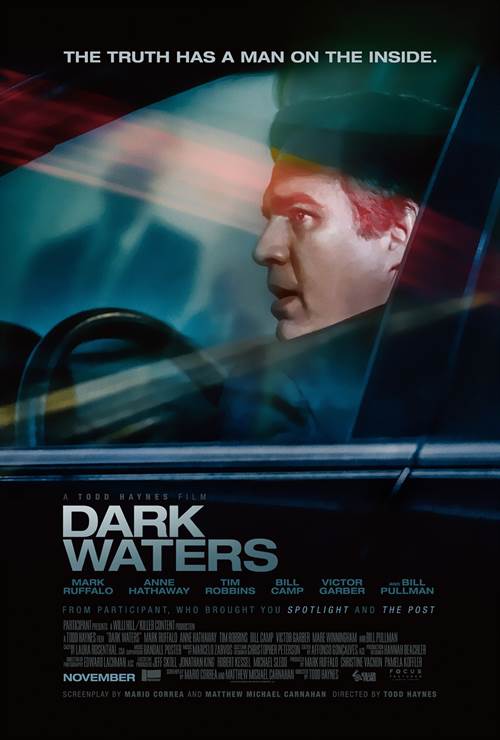 Inspired by a shocking true story, a tenacious attorney (Ruffalo) uncovers a dark secret that connects a growing number of unexplained deaths due to one of the world's largest corporations. In the process, he risks everything – his future, his family, and his own life - to expose the truth.

Download Dark Waters in Digital HD/4K from the iTunes store.

Listen to the Dark Waters soundtrack on Apple Music. 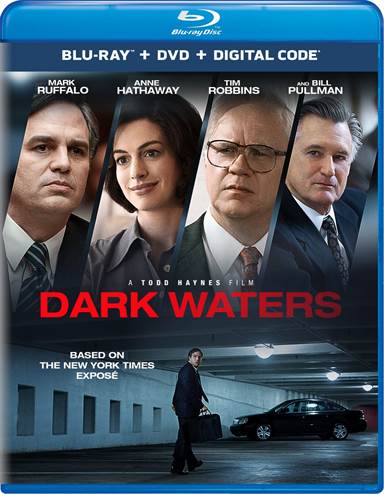 DuPont, a multi-billion-dollar company, has been creating products to make our lives better for decades…or so we had been led to believe.  Teflon, their non-stick coating that covers pans in homes all over the world, used to be manufactured with PFOA – C8, a chemical that has been shown to be harmful to all life.  It is estimated that 99% of all living things have some C8 in them and high concentrations have been proven to cause certain types of cancers as well as birth defects.  Today, Teflon is no longer made with this harmful material but the struggle to see changes occur and to hold DuPont liable has taken over 20 years.

Robert Bilott (Mark Ruffalo; Avengers: Endgame) was a corporate attorney when in 1998 he was visited by Wilbur Tennant, a resident of Parkersburg, West Virginia, who used to be a neighbor of Robert's grandmother.  Tennant implores Bilott to help him since Tennant believes DuPont has poisoned his lands and water supply.  Reluctant to help, Bilott goes to visit Tennant's farm as a curtesy but what he discovers is rather alarming.  When he returns to Ohio, Bilott inquiries into the environmental studies conducted by DuPont over several decades.

As Bilott digs deeper he finds disturbing results from the studies DuPont published including several chemicals that seemed to be unidentifiable.  As he makes inquiries with DuPont's attorney, their working friendship deteriorates and becomes hostile. It is then that Bilott becomes more serious about Tennant's claims and convinces his law firm to allow him investigate further.  What Bilott ultimately finds is rather disturbing.  Dupont has been knowingly sending harmful chemicals into the air, ground, and water supply for much of the state of West Virginia.  Over the next twenty-plus years, Bilott has sued DuPont and collected hundreds of millions of dollars for those who have been injured by their negligence.

Ruffalo once again portrays an intelligent, investigative character and, as usual, does a terrific job.  He also happens to be surrounded by an all-star cast including Anne Hathaway (The Dark Knight Rises), Tim Robbins (The Shawshank Redemption), Bill Pullman (Independence Day), Victor Garber (Alias), Bill Camp (12 Years a Slave) and Mare Winningham (Wyatt Earp).  The combination of Ruffalo playing off these other talented individuals makes for some powerful scenes especially those including Hathaway and Robbins.  Bill Camp also shines as the farmer who brings this all to light.

The 1080p resolution and 2.39:1 aspect ratio offers audiences a crisp visual despite the muted color tones of the film.   Dark Waters' DTS-HD master audio 5.1 is also solid but not overwhelming.  The dialogue, which let's face it, is most important in this film is clean and not overpowered by a very subtle soundtrack.  The extras include threes short featurettes which frankly slightly disappoint.  While they offer some insights to the production and it was wonderful to see some of the real-life individuals with cameos in the movie, there are so many more details about the production and the case itself that was never explored.  The three featurettes are:  Uncovering Dark Waters, The Cost of Being a Hero, and The Real People.

I remember the news stories about DuPont and Teflon but, until seeing this movie, I didn't fully grasp the severity of what occurred.   The script is well written as it breaks down as much of the "legalize" as possible for the layperson to comprehend and director Todd Haynes (Carol) shows enough images to make an impact without completely turning off the audience.  Ruffalo, just as he did in Spotlight, portrays a man searching for justice and beautifully portrays the determination and frustration Bilott feels when roadblocks keep popping up and getting in his way.