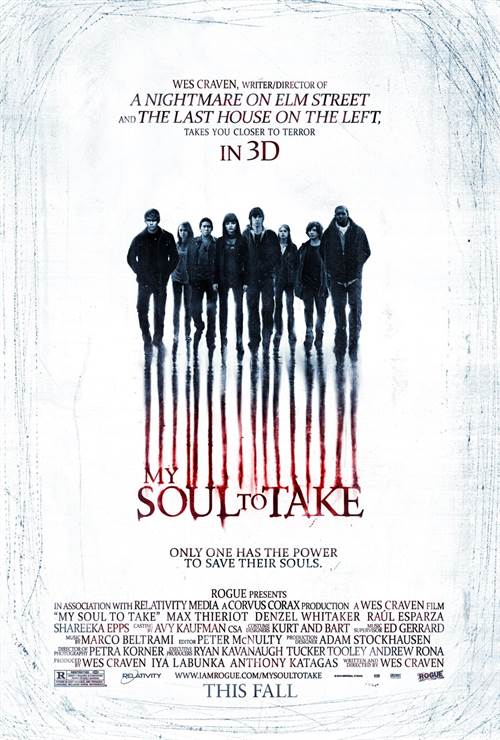 My Soul to Take Synopsis

In the sleepy town of Riverton, legend tells of a serial killer who swore he would return to murder the seven children born the night he died. Now, 16 years later, people are disappearing again. Has the psychopath been reincarnated as one of the seven teens, or did he survive the night he was left for dead? Only one of the kids knows the answer. Adam “Bug” Heller (Max Thieriot) was supposed to die on the bloody night his father went insane. Unaware of his dad’s terrifying crimes, he has been plagued by nightmares since he was a baby. But if Bug hopes to save his friends from the monster that’s returned, he must face an evil that won’t rest…until it finishes the job it began the day he was born.

My Soul to Take images are © Rogue Pictures. All Rights Reserved.

Nathan M Rose
After having a five-year hiatus from directing the Master of Horror, Wes Craven is back this fall with his latest film, My Soul To Take.My Soul To Take takes place in the sleepy town of Riverton, where a legend tells of a serial killer, The Ripper, who swore he would return from the grave. Now, 16 y...
Full Review | Grade: F