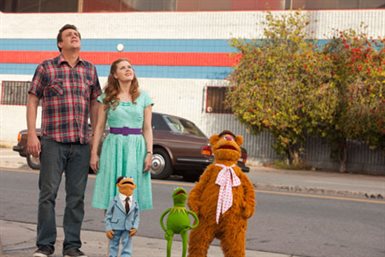 On vacation in Los Angeles, Walter, the world's biggest Muppet fan, and his friends Gary (Jason Segel) and Mary (Amy Adams) from Smalltown, USA, discover the nefarious plan of oilman Tex Richman (Chris Cooper) to raze the Muppet Theater and drill for the oil recently discovered beneath the Muppets' former stomping grounds. To stage The Greatest Muppet Telethon Ever and raise the $10 million needed to save the theater, Walter, Mary and Gary help Kermit reunite the Muppets, who have all gone their separate ways: Fozzie now performs with a Reno casino tribute band called the Moopets, Miss Piggy is a plus-size fashion editor at Vogue Paris, Animal is in a Santa Barbara clinic for anger management, and Gonzo is a high-powered plumbing magnate.

The Muppets images are © Walt Disney Pictures. All Rights Reserved.


Disney's The Muppets...Again! Kicks Off Production in London  1/30/2013 11:10 AM EDT
BURBANK, Calif. (January 30, 2013) - The filmmaking team behind 2011's celebrated film "The Muppets" reunites as Disney's "The Muppets … Again!" kicked off production last week in London. The all-new global Muppets adventure welcomes Ricky Gervais, Ty Burrell and Tina Fey to the mayhem, along with Kermit the Frog, Miss Piggy, Walter and rest of the Muppets. The film is directed by James Bobin ("Fl...  More>>

Tina Fey Joining Cast of Muppets Sequel  1/9/2013 11:19 AM EDT
"30 Rock" star, Tina Fey, is in final negotiations to star in the upcoming "Muppets" sequel for Disney pictures.The cast already includes Ricky Gervais and Ty Burrell.  The film is said to be a caper set in Europe.Tina Fey will play the part of a Russian  gulag prison guard.  Filming begins in London this month....  More>>

Muppets Sequel Moves Ahead... Without Jason Segal  3/1/2012 4:13 PM EDT
It's been reported that Disney will be making a sequel to the highly successful Muppets film, however, this project may not have Jason Segal involved. Segal was definitely key in making the film a success, wanting to make sure that longtime fans of The Muppets were happy as well as newcomers.However, Nicholas Stoller, co-write of the film, had a place in the film's success as well. And now, Stolle...  More>> 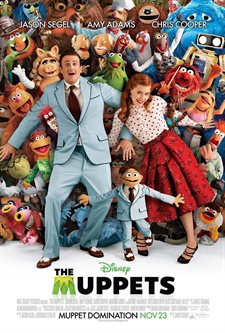 Those adorable, crazy Muppets from the late Jim Henson are back on the silver screen this November with their latest film simply entitled, The Muppets.

The story plot is simple and follows closely to real life. The ever-changing world has left the Muppets as just a memory and not relevant to modern day society. The Muppets have moved on to have normal jobs instead of hosting the Muppet Show and pretty much have given up on their old lives.  To top it all off, the rich, Texas oil tycoon, Tex Richman (Chris Cooper, Bourne Identity, American Beauty), has plans to tear down the old Muppet Studios in the search of oil.

Along comes Muppet newcomer, Walter, his brother Gary (Jason Segel, Forgetting Sarah Marshall I Love You, Man), and Gary's girlfriend Mary (Amy Adams, Enchanted, The Fighter).  During the visit the decrepit Muppet Studio vows to help Kermit and friends save the Muppets and everything they worked for in years past.

The film itself is simply amazing; writers Jason Segel and Nicholas Stoller, along with Director, James Bobin knew exactly what was needed to bring the Muppets back into modern society, and they achieved their goals to the fullest extent possible.  The dialogue is witty, the timing of the jokes is dead on, the length of the musical numbers is just right; however, at one point, I felt I was watching the Buffy The Vampire Slayer Once More With Feeling episode rather than the Muppets -- and the story hit the right amount of nostalgia and modern-day references required to jump start the franchise again.

As with most Muppet films, the soundtrack plays an integral part of the story; and just as with the script and acting, this soundtrack hits all of the right marks.  The film uses classic Muppet tunes, such as "The Rainbow Connection" and "Mah Na Mah Na", as well as great new ones, such as "Man or Muppet".

Even with all of the marketing behind-the-scenes, Disney has been touting the new Muppet film as "do-or-die" time for the franchise and even going as far as saying it might sell the rights to the franchise.  However, this film most certainly proves the Muppets might have been forgotten, but they will always be there when you need them.