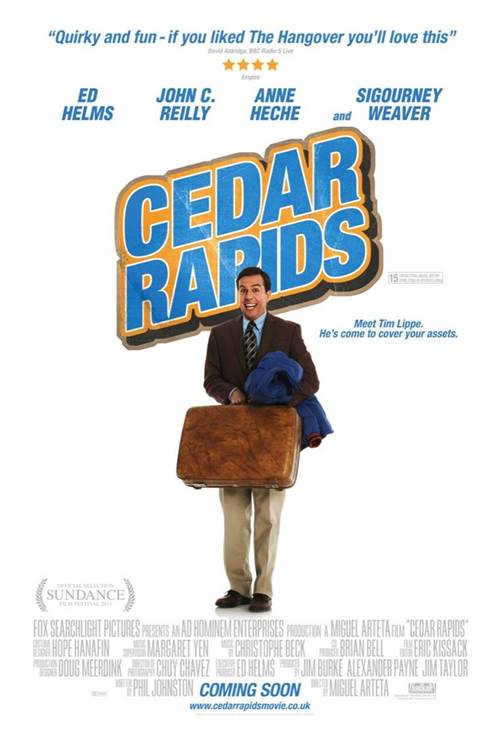 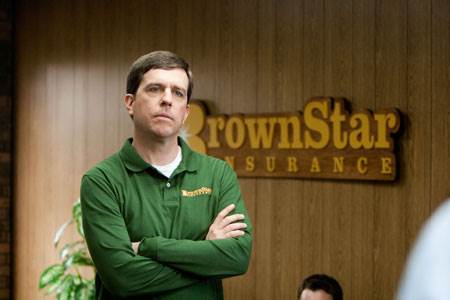 Terrified of leaving his tiny town for the first time, sheltered insurance salesman Tim (Ed Helms) nervously sets out for the bright lights of bustling Cedar Rapids, where he attends a chaotic insurance convention and learns how to survive in the real world.

Download Cedar Rapids in Digital HD/4K from the iTunes store. 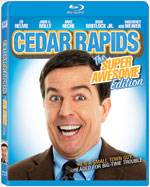 The Ed Helms vehicle "Cedar Rapids" makes its way to your big screen with the Blu-Ray release of the "Super Awesome Edition." One may be asking themselves Ed who? You know him from The Office and as the strait shooter Stu from The Hangover 1 and 2. Helms essentially reprises his role from The Hangover here as the conservative naivete who isn't quite sure what he in store for.
With so much of the marketing of the film surrounding Helms success in The Hangover its only natural that a review compare the two. If you're expecting The Hangover however, you will surely be disappointed.
Helms gets his first top billing in a comedy as Tim Lippe, an insurance salesman from Wisconsin. A christian conservative, Helms plays a boy who never grew up and has never strayed far from his social or emotional norms. He has an adult relationship with his middle school teacher (Sigoureny Weaver) and wants nothing more than to please his clients and boss. Lippe is childish and naive but that is all about to change. In one scene after nervously telling a stewardess that he's never been on a plane before she incredulously reassures him "You'll do awesome."
Seeking the prestigious "Two Diamond" award for honesty and integrity in Insurance sales, Lippe gets sent to Cedar Rapids for an insurance sales convention. It is here he meets the comedic cast of characters who become his friends, teach him  the ways of the world, and transform Lippe. The plot revolves around the hi jinks that ensue from what might otherwise be a boring convention.
John C. Reilly (Step Brothers) drives much of the comedy as the hard drinking, and fun loving roommate of Lippe. Much of the humor is crude and blatantly suggestive (hence the R rating) and there are some laugh out loud moments. Lippe also meets soccer mom Joan Fox (Anne Heche) with whom he forms an emotional bond alloqing him to further break free from his strait laced stereotype. Running at a quick 87 minutes the Cedar Rapids doesn't seem to short or "drag on" too long.
The Blu-ray disc contains Cedar Rapids in high definition, deleted scenes, a gag reel and other special features which go behind the scenes to show you more from the cast and crew.
Cedar Rapids was shot digitally. From the opening scene with a flyover of the small Wisconsin town Lippe calls home, the picture on the Blu-ray disc really shines. While not distracting, you can clearly see fine lines in actors faces (especailly the aging John C. Reilly) and the individual flowing red hair strands in Ann Heche's hair.
The addition of a digial copy in the blu-ray pack is always nice and allows you to take Cedar Rapids with you on your laptop or smartphone, even if its "your first time on a plane" (don't worry, its very easy to transfer to your devices.).
A story about honesty, integrity, and comically "coming of age" at a later stage in life, Cedar Rapids earns points for being a brisk and funny romp through a weekend full of new experiences for the main character which ultimately transform him into a better man. Unlike The Hangover, however a repeat viewing won't be necessary.