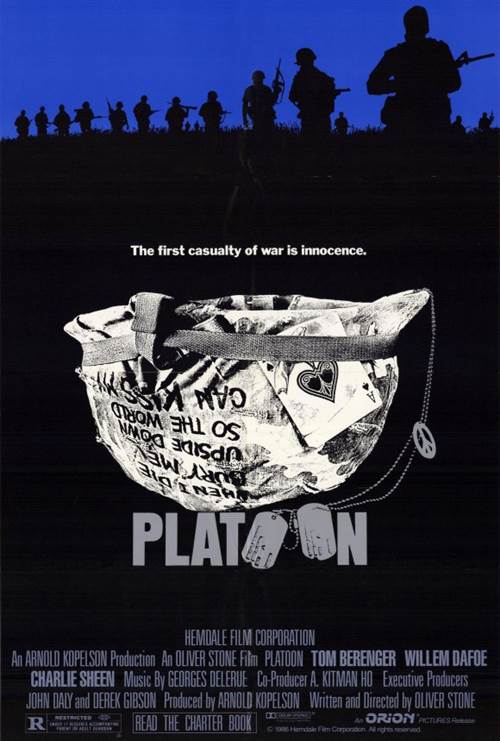 Platoon tells the extraordinary journey of Private Chris Taylor (Sheen), a young, naive American who arrives in Vietnam and quickly discovers he must battle the Viet Cong alongside the gnawing fear, physical exhaustion and intense anger growing within him. His two commanding officers (Oscar-nominated Tom Berenger and Willem Dafoe) draw a fine line between the war they wage against the enemy and the one they fight with each other. Meanwhile, the conflict, chaos and hatred permeate Taylor, suffocating his realities and numbing his feelings to man's highest value: life.

Download Platoon in Digital HD/4K from the iTunes store. 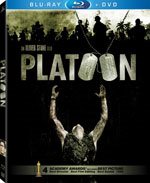 No one movie can capture the horror of war but there are some that have come close and Platoon is one of them. Directed by Oliver Stone, a Vietnam vet himself, the movie portrays the harsh realities of combat through the eyes of a young college dropout.
Charlie Sheen stars as Chris Taylor a young naïve college student who quits school and decides to volunteer in the military service. Upon arrival in Vietnam he quickly discovers that his presence there is not needed and more to the point is considered insignificant to the other battle weary soldiers who have done several tours and seen what war is truly like. He meets two very different N.C.O.'s (noncommissioned officers) the first is Sergeant Robert Barnes (Tom Berenger) who is a hard and ill-tempered, not someone you want to meet on your first day "in country".
The other is Sergeant Elias Grodin (Williem Dafoe) who is the more pleasant and cooperative of the platoon; someone who is willing to look out for you no matter how long you have been there. Very quickly the enthusiasm Taylor has for his assignment in Vietnam wears off but is replaced with admiration for the more seasoned officers, like King (Keith David), even if they do not extend the same friendship back to him. One night while on patrol the group gets ambushed because of Taylor's negligence while on watch, Taylor is maimed in the ensuing fight. When he returns from the hospital he finds that he has gained the acceptance of the other officers, mainly with the help of King.
As time passes Taylor becomes more accustomed to the way of life in Vietnam. While on patrol with his platoon, they become involved in a firefight. During the massive confusion many men are wounded or killed. As air support is approaching to retrieve whoever is able to escape, Sgt. Barnes heads back into the jungle to see if he can find anyone else. He stumbles across Sgt. Elias and shoots him on the spot. Upon his return to the helicopter he informs the men that Elias is dead but before then can clear the area, they see Elias stumble out of the jungle only to be shot down by the NVA.
Taylor is more than displeased with what Barnes did and tries to organize some of the other troops to go after Barnes. Before they can do so, Barnes finds out and assaults Taylor, leaving him marked under the eye. Tension only increases between Barnes and Taylor as Barnes becomes more hard and unforgiving to those around him. It all comes to a head when a large assault is made on their home base by hundreds of NVA soldiers. With all the horror and brutality that has occurred during this war it is no surprise what occurs when Barnes and Taylor finally confront one another.
The film went on to win 4 awards including Best Picture and Best Director. The movie showed a harsh truth to war, that those who engage in it will wind up becoming someone completely different than who they were at the start. Now the film comes to Blu-ray boasting a large assortment of extras for all of those hardcore fans.
Two-discs are what we get this time around, the first containing docs looking back at Vietnam in 1967-1968, how they created the look of Vietnam, the legacy of Platoon, different stories from the war and how they prepared for the film. There are also two commentaries, one from Oliver Stone, the second from military advisor Dale Dye. There are also some deleted and extended scenes with optional commentary from Oliver Stone. Disc two has the standard version of the film.
Quite frankly given the impact of this film and the staying power since it first came to theaters, this Blu-ray would more than satisfy the battle hardened movie fan, and for those who felt it wasn't enough, you clearly need to head back to boot camp.