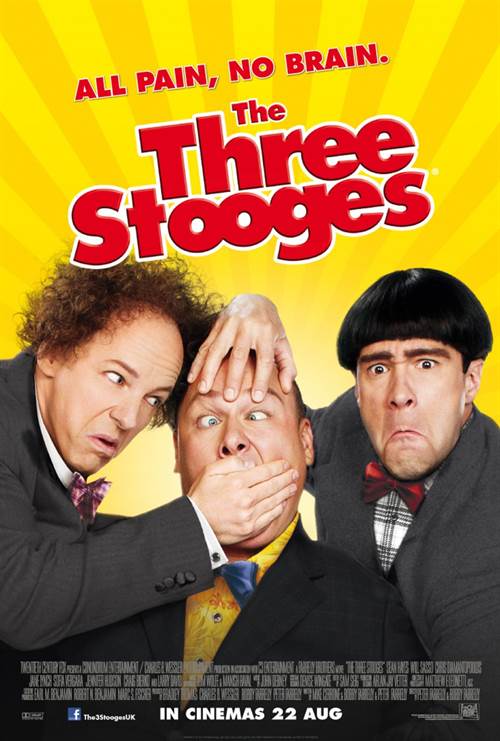 The Farrelly Brothers have been working on a modernization of the Stooges, 'slapstick with heart' concept since the mid-90s. But it was their decision to focus on an origin story for Larry, Moe and Curly and thus introduce the three to a new generation that pushed the picture onto the fast track. Audiences have embraced The Three Stooges in a variety of mediums; vaudeville, shorts, television and home video but for Peter Farrelly the communal nature of a theatrical feature remains the perfect experience.

Stream The Three Stooges in Digital HD/4K from the AppleTV store. 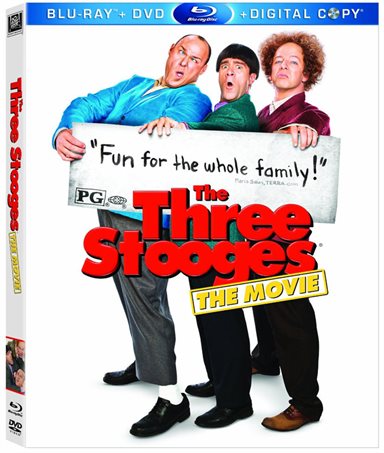 As The Three Stooges, Moe Howard, Curly Howard, and Larry Fine created a comedy institution. An act that grew into a popular series of shorts and features, the Stooges developed into a household name, with young fans spending long hours replicating the trio's signature moves of pain, to the consternation of parents everywhere. They are legends with a brand name that's endured throughout the years, maintaining pop culture position despite an origin that dates back to the 1930s. Attempting to highlight their love for all things Stooge, filmmakers Peter and Bobby Farrelly have brought forth "The Three Stooges," an attempt to return classic comedy flavors to the big screen, using an all-new cast. Although the mimicry is sincerely impressive, the picture is anything but, stumbling through a series of unfunny scenes in an effort that's more for the kids, finding the Farrellys hoping to trigger a new wave of fandom with this love letter to eye trauma, angry nicknames, and hair pulling.

Dropped off at an orphanage as infants, Moe (Chris Diamantopoulos), Larry (Sean Hayes), and Curly (Will Sasso) matured into destructive adults, terrorizing the nuns in charge, including Sister Mary-Mengele (Larry David) and Mother Superior (Jane Lynch). Idiots who love to inflict great pain on one another, the Stooges soon find themselves on a mission for cash, hoping to raise a fortune in a hurry to help save their orphanage from foreclosure. Hiring the Stooges to help kill her kindly husband Teddy (Kirby Heyborne), Lydia (Sofia Vergara) is appalled with the lack of competency coming from the three goons, who quickly put Mac (Craig Bierko), her co-conspirator, into the hospital. Still hunting for a quick buck, Moe finds himself hired as a cast member on "Jersey Shore," while Larry and Curly keep to brainless schemes, lost without the guidance of their eldest brother.

Oddly, "The Three Stooges" is divided up into three "episodes" for easier consumption, though the murder plot carries through the entire picture. It's one of several attempts by the Farrellys to mimic the classic Stooge shorts, drenching the effort in original sound effects and music cues, also keeping the three leads identical to the icons in appearance. This is an extremely slight feature, intended to break off easily into bite-sized pieces, leaving one to wonder why the filmmakers bothered with an extended story at all. Miniaturized plotting would actually benefit the movie, giving the Farrellys more room for slapstick and narrative nuttiness. Unfortunately, "The Three Stooges" puts forth an attitude to assume a deeper connection to the conflict at hand, using the plot to get to know the Stooges in full. Because that's what Stooge fans are truly clamoring for: character development.

Although it's a zany picture, "The Three Stooges" merely exists to reheat old routines, finding Moe, Larry, and Curly once again locked in a battle of antagonism, poking, beating, and stomping each other. Stooge completists might get a charge out of the painstaking restoration of hurt, and kids will undoubtedly go crazy for scenes where the boys smash one another with various hammers, bells, and saws, but there's only so much to do with a "Three Stooges" feature film. The Stooges themselves often had trouble sustaining their breezy brutality for 90 minutes, leaving the Farrellys out of ideas early on, resorting to fart jokes to nab laughs. There's even a scene where the brothers are trapped inside a hospital maternity ward, commencing a squirt gun-like fight using urinating babies. While Stooge humor is inherently low-brow, the original line-up rarely stooped to bodily function humor to jolt their audience. There's also flagrant product placement and a few dated jokes, including the extended visit to the world of "Jersey Shore," where Moe shares his bully philosophy with the insufferable MTV gang. It's more eye-rolls than eye-pokes.

While the material leaves much to be desired, performances from Diamantopoulos, Sasso, and Hayes are impressive, showing incredible command of Stooge expressions and choreography. The imitations are skillful and entertaining, enlivening the picture with a commitment to preserving notorious shenanigans and behavioral explosions. It's the Farrellys who bring down "The Three Stooges," not the actors, with David and Vergara also contributing appealingly manic work to the feature.

Out now on Blu-ray the film looks and sounds solid, allowing the stunts between the actors to play out well, even on a small screen. The bonus features are all jammed onto the first disc; they are a history of the actual 3 stooges, a behind-the-scenes feature, a look at the sound effects used in the film, how they cast the stooges, a stooges mash-up and the original screen test. Disc 2 is a digital copy of the film for viewers on the go.

In the end, "The Three Stooges" is intended for younger audiences. Those fresh to the world of The Three Stooges won't object as easily to the lackluster scripting and comedic staleness of the endeavor. It's hard to imagine older audiences being as lenient with this strange idea for a cinematic resurrection. 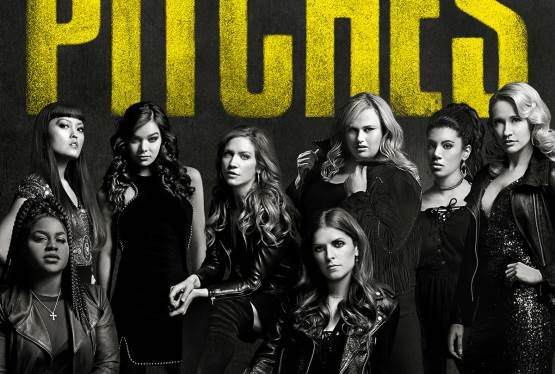