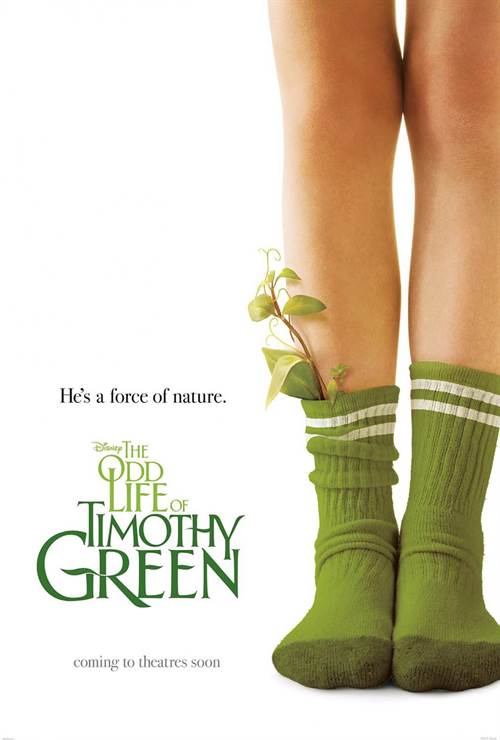 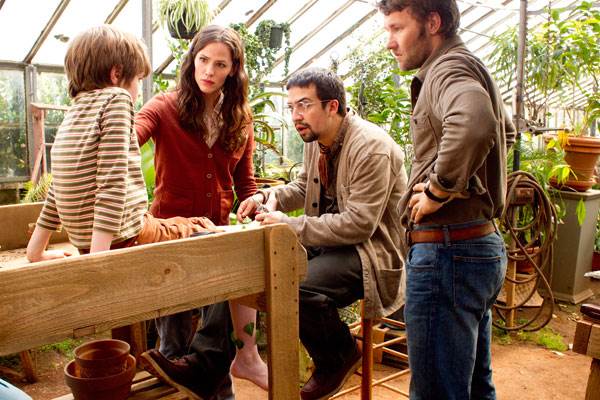 Academy Award–nominated director/writer Peter Hedges (“Dan in Real Life,” What’s Eating Gilbert Grape?”) brings enchantment to the screen with “The Odd Life of Timothy Green,” an inspiring, magical story about a happily married couple, Cindy and Jim Green (Jennifer Garner and Joel Edgerton), who can’t wait to start a family but can only dream about what their child would be like. When young Timothy (CJ Adams) shows up on their doorstep one stormy night, Cindy and Jim—and their small town of Stanleyville—learn that sometimes the unexpected can bring some of life’s greatest gifts.

Stream The Odd Life of Timothy Green in Digital HD/4K from the AppleTV store. 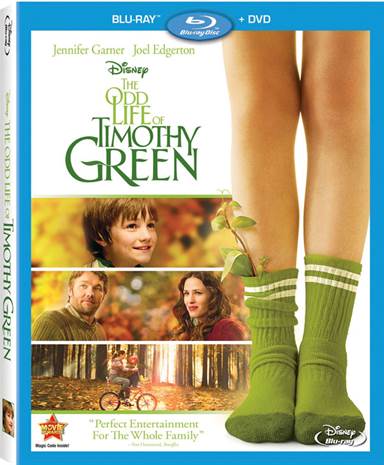 "The Odd Life of Timothy Green" forces an enormous amount of whimsy down the throat of its audience in the early moments of the picture, though it doesn't take very long to develop a taste for the sweet stuff. Heartfelt and genuinely magical, this Disney release is perfect for the family, touching on themes of parenthood for adults, while kids will likely be charmed by the mysteries presented. A touching fable, "Odd Life" benefits from an eager cast and a unique sensitivity, finding a comfortable, endearing position between a bizarre premise and its enthusiastic execution.

Unable to have a child of their own, Cindy (Jennifer Garner) and Jim Green (Joel Edgerton) are having difficulty moving past their pain, spending a stormy night drinking wine and fantasizing about the reasonably ideal kid they will never have. Burying their dreams in a garden, the couple is shocked to find Timothy (Cameron Adams) inside their house the next day. A 10-year-old with leaves attached to his legs, Timothy is there to be a son to the shocked but delighted parents, formed out of the attributes previously brainstormed. Happy to introduce Timothy to their friends and family, Cindy and Jim are careful to protect the boy's fantastical birth from outsiders. Watching Timothy grow as a person, develop a connection to an introverted girl named Joni (Odeya Rush), and surprise his parents with unexpected abilities, Cindy and Jim are overjoyed with the opportunity to be the parents they've always wanted to be, though they remain overwhelmed by the daily responsibility and puzzled by the boy's mystical purpose.

Conceived by Ahmet Zappa and written and directed by Peter Hedges ("Dan in Real Life"), "Odd Life" is near miraculous in its ability to take a quirky, potentially offensive story and make it feel as close to real as possible while still retaining the fantasy trimmings of the premise. It's a movie about a boy born from a backyard garden, yet the filmmakers take the gimmick and find a thoughtful approach that's rich with character, keeping the viewing experience accessible to all ages while still nursing a few eccentric forays intended to sustain Timothy's enigmatic behavior until the very end.

It helps to have two wonderfully present performances from Garner and Edgerton leading the charge here, with the pair pouring their hearts into the work, making Hedges's job to communicate parental yearn from the characters all the easier. The script pushes its way into a few embarrassing scenes, one concerning a presentation of Timothy's iffy musical abilities in front of Cindy's overachieving sister (Rosemarie DeWitt), resulting in the trio performing a Bobby McFerrin-like version of "Low Rider" in front of loved ones. It's an awful idea, yet takes an endearing shape watching the actors milk the moment for every drop of silliness, strengthening the bond between the new parents and their abnormal kid. The leads are marvelous, also giving young Adams plenty to work with in a largely observational role.

Also worth noting is the cinematography which masterfully summons an irresistible autumn-like mood for the picture, reinforcing leaf imagery with gorgeous colors and atmospheric presence. The cutesy material leans toward the obnoxious. Jim and Cindy live in Small Town, U.S.A., built on the back of a local pencil factory that employs the newbie dad, while mom guides tiny groups through a museum dedicated to the factory founders. The story maintains a crushing financial reality to all the pencil-making, holding off cringes by treating the factory with a mournful sense of obsolescence, with Timothy hoping to inspire his parents to revitalize a dying, environmentally damaging product with an idea born from his uniqueness.

Despite a low-key presecence in theaters, the film still a way into people's hearts and now on Blu-ray families will have the chance to enjoy the movie once again. Beautifully mastered on Blu-ray, the gorgeous cinematography work excells here, adding a crisp, lush look to the enviroments without any degradation. Equally the audio, while not at blockbuster levels, still finds a more subtle way to work itself on your ears. The package comes with 2 discs, the first containing the Blu-ray version of the film as well as special features which include, "This is Family": See how the story was conceived, "The Gift of Music": The origin of the song "The Gift", commentary with director Peter Hedges, the music video for "The Gift" and some deleted scenes. Disc 2 contains the standard version of the film as well as 2 of the features from disc 1.

There are sweet messages on the value of individuality and the satisfaction of adoption to go with the mystery of Timothy's leafy mission, which keeps the feature soulful and fascinating. Comedy beats are less successful, but still endearing, especially when focused on hyper-attentive cheering from Cindy and Jim as their boy enters the brutal realm of pee-wee soccer. The pure dedication to all the dicey events in the movie is what keeps "The Odd Life of Timothy Green" afloat, constructing a wildly successful family film that remains fresh, simplistic, yet emotionally complex, holding attention as this little boy born from the earth arrives to remind a couple how special they truly are.